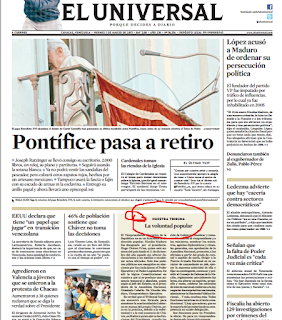 El Universal is the most venerable paper in Venezuela today. Beyond any remarks on its quality it is the longest serving national paper, it is the paper of reference if you will. El Nacional may do better on culture, but the constant editorial line, the circumspection of El Universal sets it apart from other papers of the country. And also, it has been the lone Venezuela paper that can claim to have opposed Chavez regime since the start, since 1992.

And yet El Universal has a strange characteristic: it does not publish a proper editorial. Other papers such as El  Nacional have their daily editorials as happens with papers in the US. And one has its editorial as a cover page, as its main draw, in Tal Cual. But El Universal has not published an editorial in years, that I remember, anyway.  This has changed this week as El Universal published two editorials "Nuestra Tribuna", on its front page (in red in the picture next, for today's editorial; English version here).

It is a refection of the gravity of the situation in Venezuela that El Universal goes out on a limb and starts its editorial with the following sentence, risking the wrath of the regime:


The vice president of the republic is not an elected public servant.


I think there is no need to elaborate.
Posted by Daniel at 7:45 PM

Email ThisBlogThis!Share to TwitterShare to FacebookShare to Pinterest
Labels: post-chavez