There were elections yesterday in Uruguay and Brasil, and friends of the Sao Paulo Forum have reasons to cheer. Not because they won but because their system of social division and class hatred prospers ensuring them meager but consistent electoral victories.  Let's look at Brasil. 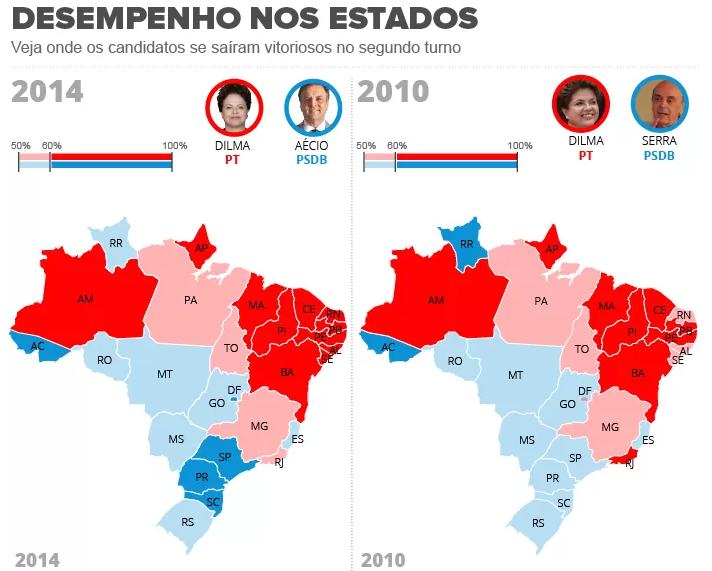 It is clear that just as the case is in Venezuela, the "productive" states are pitted against the "assisted" states. And the trend becomes more severe as the electoral margin of victory narrows, Dilma being reelected with the narrowest margin in a couple of decades at least. In fact, even though she fails to get 52% nationally in some of the red states she gets over 70% (78.6%! in Maranhao), a feat that Aecio does not manage in any of his picks (evening out nation wide because he carries the most populous state with 64.3%).

I am not going to discuss Brazilian politics, a difficult subject in the best of times considering the multiplicity of parties and regional tendencies. But the map is clear: in the last 4 years Dilma's party, PT (Foro) has increased its absolute grip on the poor North East while the productive South sees its pro market forces progress, even in Rio and Brasilia. It would be easy to claim for a Dilma/Lula supporter that the North East received finally the help it needed. And it is true that social programs in Brazil are better conceived than those of Venezuela which are strictly along electoral lines. But it is also true that Dilma allowed for the client nature of these programs to develop and that she used that as a shameful electoral blackmail. Thus Brazil just lived through its most bitter, most unfair electoral campaign. And we can only be afraid that the trend will continue in 4 years from now.

And thus operate the supporters and associates of the Foro: clientele assistance programs to secure a chunk of the electorate through fear and blackmail. We see its paroxysm in Venezuela where the Cubans went gung-ho through Chavez and easy oil money (though even there the margins have narrowed while country division increased). Fortunately for the inhabitants of other countries who need to work for a living the trend has not been as damaging yet. But it is there, do not be fooled. What is already a fact is that in some of these countries (Venezuela, Brasil, Argentina) the political division has been dramatically exacerbated. That exacerbation is the main tool in these countries for the left to retain office though increasingly pseudo electoral processes while slowly but surely the rule of law is weakened. Other countries for local reasons do not reach the polarization of the above countries (Ecuador, Bolivia, Uruguay) but the trend is there. And in Central America it has started with Nicaragua, Honduras and Salvador.

Unfortunately I do not see that trend breaking until civil war starts in one of these countries, making the other societies react.

As for Dilma, I do not believe a word she said last night. Bad first terms never lead to better second terms. Her meager victory, based on blackmail and dirty politics, can only exacerbate her character flaws. In a fair election she would have been ousted and she knows that.
-------------------

PS: for the record, before anyone accuses me of ignorance. There are productive pockets in the Nordeste and there assisted areas in the South. Yet, look at the results in Brazil main cities and state capitals and the picture is even worse than the national map!!!!!

PS2: The results and the divide were already in sight.
Posted by Daniel at 1:01 PM