Today core campaign activity for chavismo is to inaugurate the Tuy-Caracas mass commuter transit. This more than incomplete and misleading inauguration plus a few nice snippets gathered form today’s paper are a nice way to end a week in which Chavez keeps losing the agenda and is certainly not going to recover it with 41 KM of railroad.

As the election approaches Chavez is rushing up inaugurations of great projects that should have been completed years ago. That would not be so bad if he were able to inaugurate them complete, that is, finished, ready to use, to use in full. But that is not the case. A few months ago Caracas got a new subway line which stations were unfinished. Today Caracas gets a commuter train long of 41 KM that will only operate at peak time, that is about a grand total of 5 hours a day.

That commuter line will be linked to an extension of Line 3 of Caracas subway system. But that 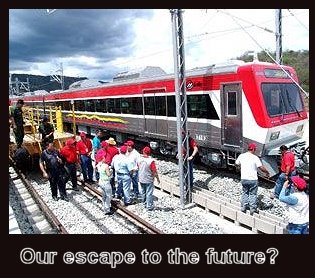 extension still has only one rail line and none of the intermediate stations is ready. Thus it will be a single train that will go back and forth every 20 minutes of so. Let’s hope that the controllers have the good idea to coordinate these two services and save the 20 minutes of wait to passengers.

Oh yes, the trains are niece and shiny red. Oh yes, the Tuy area is in desperate need of a commuter systems since it has becomes a dormitory for Caracas that subjects to its inhabitants about 4 hours of commute daily, if, IF, they leave their home before 5:30 AM. But it is also true that the project had been set up a decade before Chavez went into office, that it was delayed by the 1992 coup and its consequences, and that about 50% of the work was made by 1999. That is, it took Chavez administration MORE time to finish its 50% than the bankrupt Caldera administration to do the first 50%. Oh, but Chavez was seen at different times of troubles for his career digging tunnels, testing trains, inspecting rail laying. I suppose since the areas have too been extensively secured by the army for Chavez personal safety that might explain the delays?

But of course that does not stop chavismo from piling it high and deep. Let’s just look at the Bolivarian News Agency, ABN, who supported at tax payer expense has no info on the Rosales campaign but bubbles with info on 41 KM of railroad, except that they manage to be contradictory in their praise. The first one, an "historical" review speaks of Venezuela getting away from prehistory by building 8000 Km of railroads in the next 20 years under Chavez. If in 8 years he built 41 KM I wonder how he is going to build 8000 in the next 20 ones. At least this one writes that construction started in June 1996. The second one announces that it is in fact more than 13 000 Km of railroads that will be built. We do not know if it will be in 20 or more years. The third one is more n the inauguration per se. However like the other two it "forgets" to mention that the schedule will be limited at first. None forgets to praise the vision of Chavez.

But as often is the case the most complete collection of pics are found in the pro government blog Oil Wars who manages from the US to visit construction sites better than anyone of us here could do if we dared to investigate the actual works (I, for one, drive long the construction sites of Tuy or Puerto Cabello at least once a months and never saw what chavistas sites show). But the best part of the post were not the pictures (worth seeing anyway) , the best is the opening statement which is worth quoting:

Chavez is inaugurating massive new public works so fast I can’t keep up. But the one that is now just hours away deserves special attention. On October 15th Venezuela will inaugurate its inter-city passenger rail service since 1937. Yes, you read right – since 1937!!

Besides outdoing in dithyramb what ABN does in Spanish, besides being equally forgetful of historical planning and delays, it errs quite a lot on the historical context. See, in 1937 there was no need to have intercity railroads because, well, there was only one city worth of that name, Caracas, which by then was not even close to 300 000 inhabitants (1). On an economic perspective it was then better to pave the few dirt roads existing rather than constructing additional railroads. 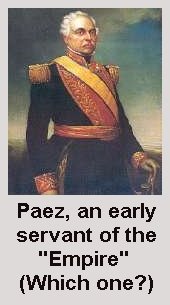 The way the ABN or a mere chavista blogger is not something to be surprised of. After all the main historical distorter of the revolution is Chavez himself. Manuel Caballero did pick up one of the latest utterings of Chavez which illustrate how far the lie system of Chavez is slowly becoming a reality for himself. Typical delusional process would say a shrink.

Apparently Chavez said last Sunday when re-opened a refurbished high school that Paez betrayed Bolivar on order of the empire. The problem here is that the only “empire” at the time was Great Britain and that it was firmly on the side of Bolivar against the other empire, albeit a declining one, Spain. That Bolivar was smart enough to foresee the rise of the US as an Empire of sorts does not make the US an Empire in 1820ies, the period where Paez slowly started his rise to become the first president of Venezuela. Heck, there was not even economical value for oil then!

The concern of Caballero in his Op-Ed piece is really the lack of education that Venezuela keeps suffering, a lack that is not going to be solved by a government that only aims at indoctrination to create the new bolivariano-socialisto-XXI-centurio Venezuelan man. And the paper does give us two dramatic examples on how bad things are on that matter no matter what the self proclaimed ambitions and self vaunted results chavismo barks of around the world. 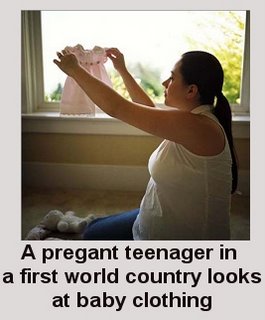 First, the Mision Robinson. These noteworthy program, the one supposed to end illiteracy in Venezuela, one of the only three that Chavez dared (or could add?) to his new “Love campaign” turns out not to have been the success vaunted, and a program whose result are not readily acknowledged by the UNESCO. See, as all chavista Misiones, Mision Robinson cannot be audited and soon enough the results of the government do not match the reality that foreign and curious observers are finding when they visit and examine. In fact, it seems that even the INE statistics do not match the governmental ones.

Do you need a factual proof that education IS NOT ADVANCING in Venezuela? Will the fact that 1 in 4 births in Venezuela is from a girl between 15 and 19 years? Will the fact that this is the highest rate in LatAm affect your perception? And that this has been the fact for at least the last five years, does it sow doubts as to the efficiency of Mision Robinson and other educational programs? Could these programs be more interested in indoctrinating and recruiting folks for the revolution instead of addressing REAL issues?

And thus Chavez pursues his grandiosely empty inaugurations hoping that he can keep fooling people (2). We shall see how successful he is, how much people are willing to ignore the continuous degradation of the country as education fails to improve, the crime keeps rising, that real jobs creation is stuck, that inflation is on the rise again, and more, much more.

2)As any wanna-be dictator to boost his image Chavez focuses on public works as if they were solely his, public works that ANY president in office would have had to tackle one way or another. You can have some fun reading a past article on this subject.
Posted by Daniel at 7:10 PM