I feel obliged to blurt something since it is going to be soon a month without an entry.  But then again, contrary to Punditlandia principles where the less you know about a topic the most you believe to be entitled to speak or write about it, it does not feel right to me to write about the suffering of Venezuela this past months, when I am here with all life's comfort.

It has been particularly offensive to read some Liberals, from the Obama administration, preaching absolute non involvement with Venezuela to patronizing congratulations about the recent declaration that the Red  Cross supplies will enter, with the suggestion that the opposition bears some of the responsibility as to why humanitarian help did come sooner to Venezuela.  That type of self sufficiency is unbearable and I find Ilham Omar in a way less offensive, at least she does not patronize.   But it confirms one thing, the Obama administration Southern policy has been a complete fiasco and we see new evidence on the why everyday.

If I digress on that it is because the hand wriggling I read from many parts is obscene. Only now they are  realizing that Maduro is a serious problem? And yet they have been unable to man up to the situation and do something about it.  Europe as a whole is way behind the US. If France spearheads the critics, the recent visit of Prince Charles to Cuba is total disgrace. I think Brexit has fried the UK government brains. They keep condemning Maduro but they send the heir to the pupeteer.

The point here is that Venezuela is left to cruise fast to disaster. What happened in March is unspeakable.  Besides the obvious strain on the population there is also terminal damage to the economy.

I lost my mother in law two days ago. She is not a "direct" victim of the blackouts but they certainly sped up her condition, delaying many treatments and lab checks. Not being there does no allow me to decide between  direct and "direct".  Amen of my personal distress at losing the woman with whom I had to share the burden that were the 5 years of Ivan's via crucis, and not  being there to thank her again and say farewell.

But there were material losses. My freezers barely made it through the first 79 hour blackout. Not too much loss there but a total loss in my refrigerator.  When there is no light there is no water and a lot of my gardening went dry.  My family had its own losses and misery, in particular a brother stuck on an eighth floor with 2 kids, wife, and two visiting in laws.  And yet we were not the worse off.

The worse off where people without food, unable to pay for it if they could find some it since there is no cash and no card points.  People who saw their neighbouring food stores being pillaged by chavista hords, directed by the way. People in hospitals, where again the regime locked public entrance least some one would report casualties. People without water for days as we wait for some epidemic to rear its head.  People without security as the lack of light made lock up themselves in the hope that colectivos, paramilitary and mere  criminals would catch them absolutely defenseless.

It has been awful,  being thrown back into the XIXth century suddenly, without even a phone to call for help or inform relatives that, well, you were still alive.

But even more awful is that blackouts are now long and recurrent. And even worse that the regime makes a mockery of it, inventing the stupidest excuses possible, sending people saying that we recovered the ability to talk to each other, village activities of yore, while on state TV, if you could see it, joy, happiness, dancing, patriotic victory screams were the news.

More than ever the regime has shown its two worse defaults, amen of the down right criminal.  First, it's absolute incompetence. With 3 million out of the country, with 30% production from what was produced a few years ago, it is unable to keep electricity as consumption dropped considerably.

And second, that it does not care a shit, that it is genocidal.

And thus Juan Guaidó returned to Venezuela. Through the normal entry point in Maiquetia airport.  He went in a triumphant caravan all the way to Caracas to attend a rally. That caravan and rally were immense. And more succesful than whatever show the regime had attempted to put up previous days to make us believe that carnival holiday was joyful, reflecting a happy and content nation.

In short it was a major defeat for chavismo that had to bow to international pressure, and to a popular will favoring Guaido for which denial is now useless.  True, several ambassadors were waiting for Guaidó in Maiquetia to shepherd him to Caracas. But had the regime wanted to arrest Guaidó it would have done so at customs, away from public glare, packing Guaidó in a helicopter to wherever.

The fact of the matter is that the regime caved in, at least for now.  Contrary to what  many said, that the February 23 battle of Cucuta showed the resilience of Maduro, that battle was lost by the regime. Guaidó is the one imposing the agenda. His scene on the highway to Caracas when his caravan stopped in front of public housing to let Guaidó climbing on a car and wave the flag in front of a delirious crowd had a taste of the nails being planted on the regime's coffin.

One of the amazing things for me following this from afar was how the press began slowly to bury Guaidó because he was unable to force the entry of the humanitarian aid.  Was he? Nobody serious in Venezuela expected the aid to enter.  We all knew that it was a show of strength, that the objective was elsewhere. How could so many papers, from the NYT down be so gullible as to write up for some that Maduro was resilient, that the opposition was on its way to yet another big disappointment and what nonsense.

True, that battle to unseat the regime is far from won, but I am almost willing to find it somewhat suspicious for some US papers to be hinting to a premature Guaidó burial least Trump would be seen as scoring a point. I see this ship sailed.

Now you can read many of them on Twitter tonight talking of a "pendulum" or some other flimsy explanation.  Can't wait for the brainy exculpatory articles tomorrow.
Since January 5 the opposition has had a strategy that it has remarkably followed.  Guaidó was the one who decided to bite the bullet and take all risks.

The ill perceived failure of February 23 was not so. Guaidó was doing EXACTLY what he was supposed to do, rounding up support for the next  move, taking advantage of the true vileness the regime was willing to display at Cucuta.  Contrary to what many thought, expected, hoped for, Guaidó was not looking for a cozy exile spot, he was preparing his next moves, the one today being only the first one. 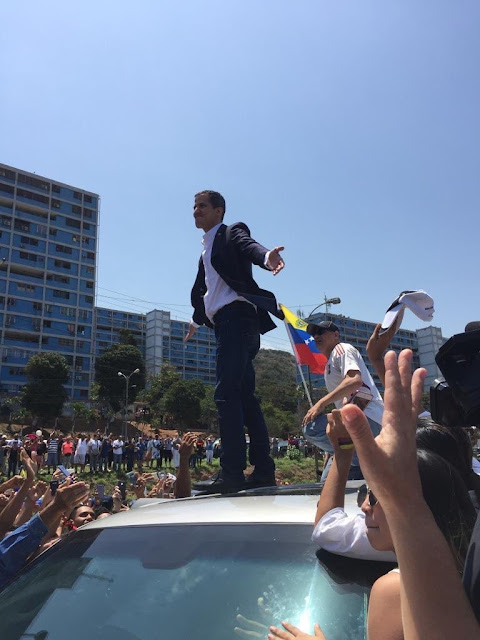