Today finally the first face off between the regime and the opposition under Vatican and Unasur guidance was held. Allow me to be deeply pessimistic about the prospects by just looking at the first picture. 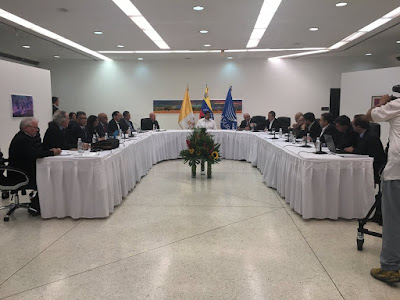 What is wrong with that picture? Or if you prefer, what could possibly go wrong when the first scene of that movie is the one above?

Symbols matter. Even more so when dialogue to avert civil wars are undertaken.

Here we have the guy who is the psychological focus of all that has been going wrong since Chavez died, and he is presiding? How could the opposition accept to sit down with Maduro? One thing is to try to dialogue with Maduro's people, another is to discuss under his direct oversight. At a moment when Maduro is cornered and totally done overseas, such a picture gives him a new legitimacy at home. The more so that only state TV is showing news on the scene, and manipulating the whole thing at will.

I am haggardly in shock. Well, until I found my way to this key board anyway.

Email ThisBlogThis!Share to TwitterShare to FacebookShare to Pinterest
Labels: 2016 crisis

7 ways to tell if a strike is a success

Today the opposition has called for a work stop for individuals. The regime is in full propaganda mode to claim that the move is a failure. The opposition claims it is a success. So here are 7 items to figure out whether it was a success

1- It is NOT a strike, nor a lock out. What the opposition did was to ask folks to stay put at home between 6 AM and 6 PM.

The splendors of well aged chavismo

Thus we are in the middle of a social, economic and, thus, political crisis of major proportions. The regime assuredly thinks about what to do to counter an opposition that has been setting up the agenda for quite a while now. After a massive brain storm they come up with a minimum wage increase of 40% . I think, I cannot even be bothered to check whether it is 40 or X: it makes no difference.
Read more »
Posted by Daniel at 5:15 AM 3 comments:

The rebellion has started

What else could the regime expect today after the annulation of all elections? Or is is it what the regime hoped for? And will it still be of any use for the regime this late a confrontation?


What has happened today is transcendent, on many aspects.

This is the tropics, this is a banana republic. What else could one expect but the picture above which should be making a few international front pages tonight.

Recall Election gone. So what?

I suppose I should write about the annulation of the Recall Election.  I had guessed long ago that it would not happen. The intensity of the dislike toward Maduro is so strong, even among chavistas, that the regime could not allow CNN document the huge lines that would have formed for three days this week.  They had no stomach for that, it was better to use an idiotic legal sophistry and send it all ad patres.

To concur with the prevalent head line this week end that Venezuela is officially a dictatorship is an hypocrisy. I have long said it so and I am actually upset at some people having trying to avoid the D world finally pouting it. As if annulling the Recall Election was more despicable than, say, having political prisoners, forcing those freed into exile, stealing the budget of the nation, and more,

I will just comment on how ridiculous the pretext to kill the Recall Election was. In short, a sub judge in Podunk decided that the CNE had not done its job to vet all the signatures for the 1% collection to start the process. The ridicule, of declaring themselves incompetent through their beloved electoral ministry, CNE, is something they cannot worry about anymore. The obsessive objective is to never leave office. All considerations be dammed.

That is all that there is to it.

So? Can we all agree on the D word?

This is kind of a melancholy post. For years now I have been calling this a dictatorship. It took sometime to start seeing it expressed in the foreign press. And even as I type there are some in Venezuela or overseas (I am looking at you, Zapatero just for today's denialist) that still refuse to use the D word, expecting who knows what leniency from who knows where.

UPDATED Asking for help in getting medical assistance

UPDATE: this entry will remain on top for the time being and be updated as needed. Poltical ones below as they appear.
#1 update

The happy-go-lucky dictatorial news of the day

So the regime of Nicolas Maduro has a problem: how to pass the 2017 national budget controlled by the opposition held National Assembly? Really, if we cannot loot in peace, what good is the revolution for!?