I suppose I should not break a long and on occasion distinguished electoral number crunching tradition. Even though elections have become a test of will rather than any democratic exercise it still matters that we look at the electoral considerations and perspectives. Even if diffidently.   Thus this general and as brief as possible unique electoral post about what are not necessarily the main races to watch but rather those that should confirm the trend as to the waning of chavismo. Outside, of course, the ever present crass electoral fraud.

I know that Maxima is an habituée of hard core repressive regimes, but this....

Just a day in the life of a dictatorship: Maduro starts applying the enabling law

I never cease to be impressed by the deep denial that still exists in some people as to Venezuela being a military dictatorship.  Sure enough, there are "elections", a civilian "president" is the one "ruling", you can travel if you can find an airplane ticket, you still can read this blog though more and more the regime practices blocking certain pages, there are "so few" political prisoners, the hundred of thousand people that emigrated out are simply not genuine patriots, etc.

Fortunately for those that still do not understand that dictatorships in the XXI century are of a very different species than the earlier ones, Maduro first day with his new toy should be the beginning of enlightenment.  Even among the opposition: this Saturday finally Capriles has called for protests all around the country. About time.....

The next few months for Venezuela

Let's go beyond what qualifies as the "mundane" for the regime. Let's not focus on the organized looting, or the spontaneous one.  Let's not delve on the idiocies of the regime which claims that looting and forcing to sell at a loss will encourage production and lower unemployment. Let's just say that what started with the Daka looting over ten days ago is a mere politico-electoral ploy from the regime, that they never quite meant it the way it turned out.

Yet there will be consequences. Which ones?


I am not going to write as a pontificating economist. Firstly, I am not one. Secondly, you do not need to be a graduate from Ivy League School of Business to guess that the odds for Venezuela to enter a deep recession next year are in the 99%+.  The Maduro regime has made a massive blunder by destroying the commercial sector which is what holds together the financial and productive sectors.  Without commerce to distribute the goods around the country there is diminished receipts for the manufacturing sector, and there are no commercial benefits that go to the banks so they cannot invest in production ventures. If you do not understand this generality, if you do not agree with this, then do not waste your time reading further.

Why I am not covering the "enabling law"

Yesterday the regime managed to boot out enough opposition representatives or blackmail/buy enough to its side that it got the magical 99 number to vote the enabling law.  Such a momentous moment (redundancy intended) should be covered duly. But I'll pass for a few reasons:

From rabipelao courts to public lynching: a day of contradictions in the regime

A regime on overdrive to survive has no qualms exploring interesting ways to reach results and contradict itself as it goes, as often as needed.  If you needed evidence that Maduro is grasping for straws, you get them in the last couple of days.

Maduro promises us kangaroo courts (or is that rabipela'o courts?)

The regime knows it has blundered and that the organized looting it has recklessly promoted could boomerang badly. So appropriately Maduro announced yesterday that there will be "special courts" created to prosecute those that "speculated" on prices. Considering that anything above 1% is considered speculation by chavismo that means that we are all a target.  For good measure, since clearly the Nazional Guard and the Police are often either helping the looters or unwilling to confront them he asked the chavista militia to ensure the security of the threatened stores. In fact, he wants to make sure the militia gets its share of the loot.

Of course, these kangaroo courts are unconstitutional although for chavismo they will be made legal. Maybe we shall call them rabipelado courts since the Common Possum is the lone, I think, Marsupial of our continent.  Militia is equally unconstitutional, but who's counting?

We even had a military jerk bitching in cadena that the opposition was mocking the people in line at Daka. They cannot even get that one right, we are condemning them for taking advantage of the misfortune of someone to make a gain. 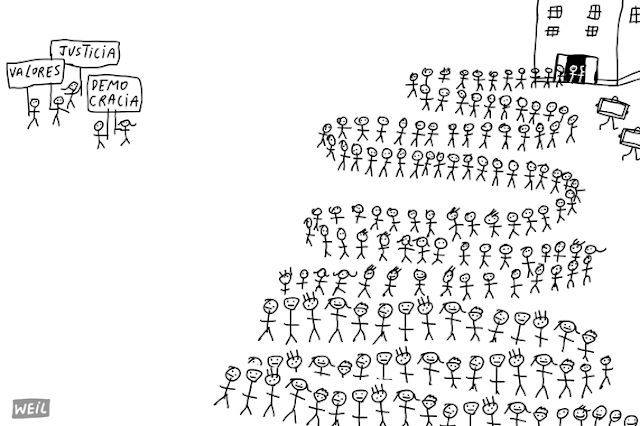 The country is in shock. Well, part of it anyway, the decent one to which I am sure I belong to. The other one, the chavista one and the "I cannot care less, dame lo mio", which is the stuff that electoral chavista majorities are made of, kept looting stores here and there, from Puerto La Cruz to Cabimas. For all the Maduro protest that he has nothing to do with the disaster he has started a stream of low burn looting here and there that he has only himself to blame. Furthermore, it is not that the regime seems unable to control the situation, it seems that the regime is unwilling to do so. Regarding the degeneration in values of the countries, well, we have Chavez to blame for it, turning the horror of the 1989 Caracazo into an acceptable chavista family values in 2013.

Gustavo Coronel publishes this morning (but without links, only his sources) that the owners of Daka are not in jail, that they were in Panama where they enjoy the benefits of a diplomatic passport. There they opened with the money earned in Venezuela a mega store of appliances and as such, well, they do not need to come back to Venezuela, ever.

Not so random thoughts on Electrodomesticonacht

UPDATED
At 24 hours from the start of the festivities, we can put together a few thoughts.

It is kind of eerie that tonight we commemorate the 75 anniversary of Kristallnacht when Hitler made his first large scale pogrom based on a rather minor political event in Paris.  But those are other times, in bolibanana pseudo revolution which has only in common with the Nazi of those days to be a band of thugs that turned to fascism to reach and retain power for as long as they could, to death if need be in order to avoid the punishment they so richly deserved.

And yet today may be a turning point of equal importance for the Caracas regime. Today it has crossed the line where it is now OK to loot stores to satisfy the appetites of its followers. Today it made OK to brand enemies whoever needs to be branded an enemy even if a few weeks ago it was benefiting from the association with power, a mutual benefit if I may dare say.  Today it has become clear that the regime will destroy anything it needs to destroy to remain in office. Today formalities have become unnecessary. Today the regime has demonstrated that it has no friends or foes, just moving targets.

UPDATED FOR LOOTING
So what is a regime that got handed the news of 5% inflation for a single month, whose main "evil" opposition leader is received by the Pope, when a "spontaneous" multigathering protest is convoked for today, that cannot hide the increasing low key riots for food, to do? It decides to sack a major electronic store chain.

Maduro ordered yesterday to seize the 5 stores of Daka, an overpriced, but then they all are, electronic/appliance chain. Allegedly the stores will be forced to recalculate their "costs" and sell all their appliances at "just price".  We assume of course that the militia and Nazional Guard in charge of the organized semi looting will be served first.  Maybe even for free. Which does not stop a country of "lambucios", from the regime or the opposition, to rush to the store to take a turn in the line and be the first ones to shop when they open again. Maduro conoce su ganado we would say in Venezuela, Maduro knows his cattle.

Wednesday Maduro made a cadena to announce "economic measures" that were mere administrative measures. Nothing is changed, the country's economy is tanking and the regime finds nothing better but to increase further the controls which have proven to be fail sure since 2005 at the very least, not to say ever in Venezuela.

I am not going to go into the official announcements which were in reality of a political nature, timed to hide from view that Capriles
has been received by the Pope yesterday. Instead I am going to go into what it means for me, a small businessman.  I will pick up a some of  them to dissect and you will be able on your own to infer that things are going to get worse, faster.  Besides the opposition has a detailed answer on the expected failure and experts like Santos are on it.