That Paraguay thing: Dilma Roussef is the most ridiculous of them all

I would love to make an extensive article on Paraguay but time is not with me.  Suffice a single observation: when a "coup" is against a president, all raise arms in anguish, including Dilma Roussef that should have known better, if anything as to the responsibilities of her continent sized country and the still smarting fiasco of Lula in Honduras.  However when the "coup" is against a parliament of a judicial system, nobody cares to talk much about it.  The hypocrisy is deafening.  When Chavez did a parliamentary coup in 2010 against the elected new National Assembly, having the lame duck one empty it of any power for 18 months and castrating it of any significant influence for the rest of its term, nobody at UNASUR, nobody at Mercosur, nobody at OAS did much protesting, if it were not for, guess what, the Paraguayan Senate.

I am not going to enter into any consideration of whether Lugo had it coming, just pointing out that with a year left in his term maybe it is not worth the grief.  The precedents in Venezuela and Ecuador should have been kept in mind.

No, my point is that the "outrage" is in part at the tiny Paraguayan Senate for not allowing the corrupt business and governmental practices of big and powerful Brazil and Argentina with Venezuela run free of any control.  Mercosur may die with Lugo and I, for one, will not miss it.

There, somebody had to say it.
Posted by Daniel at 3:29 AM 6 comments:

Away for a while

An unexpected trip takes me away of Venezuela for maybe 3 weeks.  Already blogging was rather light and the heart not on it as it should.  So you may infer that there is a real chance of no post for three weeks.  But I have my camera, my lap top, even a tablet now (the play book of blackberry, of course, the tablet to have in Venezuela) and enough airports where to kill time.  So who knows, maybe a light "where's Waldoniel" for old time's sake, pictures of things I eat, etc..  anything but Venezuela. :-)
Posted by Daniel at 3:05 AM 1 comment:

Polls from hell, and Reuters taking them at face value

Long time readers know that I have long ago stopped putting major credence on Venezuelan polling companies.  I only follow Datanalisis as relatively more accurate than others (it did good in the recent primaries for example) and Keller who in spite of all his troubles may be the best one at illustrating tendencies.  Consultores 21 is not bad too.  But no matter what, in the country of the Tascon List, it is wise not to rely too much on polls and more on your own historical analysis since too many people are unwilling to say what they really think.  Such skepticism has served me well, allowing me to predict the result of the legislative elections and the one of the primaries, and a rather good score on the 2008 regional ones.

This being said, it is necessary to break my rule and comment the latest of Datanalisis, that we know only through Reuters, written by Marianna Parraga who has more than once stumbled upon her Venezuela reporting with booh-boos that cannot be easily forgotten, to the point that many suspect her to be pro Chavez.  Far from me to go deep into her latest work because, well, it is a shoddy  piece of journalism, relying on a single undisclosed source for a private poll of which we know no detail, etc, etc...  Blogs, such as yours truly, are written with more seriousness than her Reuters reports!

Happily wasting money away on toys....

... in which we learn that not only Chavez/PDVSA are spending more on Pastor Maldonado ridiculous Formula 1 career than on Venezuelan main technological university, USB, but that with their spare change they also are sponsoring cars in other races such as Le Mans with team 44...  (hat tip: BDK)

The mind reels....
Then again PDVSA does not appear as sponsor but Avior Airlines which one wonders how in hell they manage to make enough money in Venezuela to sponsor such a thing.... Who are the owners of Avior these days? Duncan also is a sponsor...  What about CADIVI? Do they do dollars for such type of sponsoring that is of little use in Venezuela but no dollars for students abroad?

Email ThisBlogThis!Share to TwitterShare to FacebookShare to Pinterest
Labels: corruption

If you do not care about French politics or if good electoral maps leave you cold, you may skip this post altogether.

Then and now: those Orwellian moments....

Readers will surely remember the picture from the La Planta jail in Caracas, smoke billowing out, sent by a reader (dodging the occasional "lost" bullet)..
Well, the same reader sent me a current picture where you can appreciate that the walls have been covered with giant posters of the beloved leaders. Mote the exquisite details on how the support columns have also been painted in red.

In such ways is history rewritten. What was a jail riot where inmates had enough weaponry to hold off the army, where the incompetence of the jail minister was exposed crudely (she had not been able to even manage to put a director in a couple of months or feed them for that matter), where the "solution" was to allow inmates to go, un-cuffed, to the jail of their liking (with drugs and cash), where surprisingly no weaponry of significance was recovered is now set as a bright example on the prowess of El Supremo who recognized he negotiated personally with the inmates he could not control.  Then again, it was a meeting of the minds, a negotiation of pairs, of course.

Orwell would have had it this easy.

The Barclays report for what is in store for Venezuela

I received in my mail box the "ENERGING MARKETS RESEARCH" from Barclays and even though the typo in the title is already unsettling, it is worth reading. Highlights after the jump.

Antisemitism and elections in Venezuela

Great article from Tablet in which yours truly is among those asked to try to make sense on why Chavez is antisemitic, among many other to the point observations.  One of the best recent article on Venezuela.  Renews one's faith in the intelligence and understanding of some for the current situation, the more so when you compare it the following exchange in El Pais which could have well been written in 1998.  Oh well....  Good thing the writers of El Pais know better than some of the stuff written in their forums.
Posted by Daniel at 5:10 AM 26 comments:

Email ThisBlogThis!Share to TwitterShare to FacebookShare to Pinterest
Labels: antisemitism 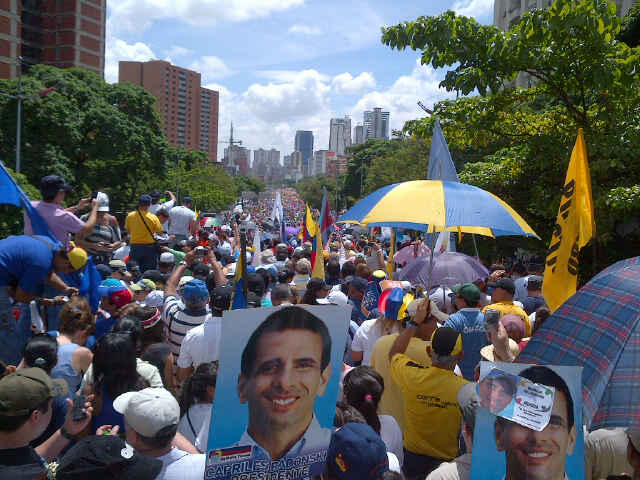 The official propaganda on state media (and even its eunuchs like Venevision) will try to minimize what happened today in Caracas.  Don't believe a word: it was a smashing success!  Even AFP says so, using the term "hundreds of thousands".

This blogger, even living in Yaracuy, has gone to all the main opposition rallies and marches in Caracas.  Pics are scattered all through the blog since 2003.  I did miss the main one, the one of April 11 2002. Thus I cannot compare it with today.  Some say that April 11 was the biggest one ever.  Maybe, but I can assure you that this one was the biggest, brightest, of the ones I ever went.

I did try the live tweet thing, but wireless signal was generally bad.  I suppose that too many in the crowds were tweeting, calling, trying to find lost parties (I lost my group early and did most of it on my own until returning to our agreed meeting point, first time ever I lost my group).  There were plenty of fun pictures to do, for a change, and you can check out my recent tweets for them @danielduquenal, as I do not like redundancy though the two pictures of this post were tweeted earlier (the one above came from a reader, look at how far the flow of people go!).

At any rate, it was a spectacular event.  Never had I so much trouble walking, never was such enthusiasm shown, and for at long last I sensed that yes, we may be able to finally get rid of Chavez, without necessarily spilling bloodshed.  After all, if 4 moths before the vote Capriles is able to gather with him that many people.....

If the march was rich in sights, it was also rich in symbolism.  For once the regime did not try to sabotage it.  Also Capriles went to make his speech in Plaza Caracas, one of the favorite pulpits of Chavez, a place which even 6 months ago no one in the opposition would have dared to organize a rally.  As we say in Venezuela, "Capriles le ladró en la cueva", Capriles went to bark inside his cave.  Capriles also went inside the CNE for his formal registration freshened up, Venezuelan flag shirt (he did walk 10K under a blazing sun and by chance I saw him run by me, barely a foot away!  He was already red and sweaty and still 3/4 of the way to go...).  He was received by all the witches of the CNE that simply could not help it, sensing that maybe, just maybe for once they should looks a tad less chavista.

All in all an excellent day for our cause and a terrible one for chavismo which is not even trying to reply tomorrow.  The lone stuff we know is that Chavez will come in a closed caravan from Miraflores Palace and that the CNE witches will go outside to receive him, as far from cameras as possible....  The comparison will be terrible, no matter how the state TV tries to hide that Chavez is sick and that his own people are getting sick of him....  Capriles has conquered the street and Chavez is left with cadenas where he sits down all the time and money for vote buying.  By October it might not be enough.

Tomorrow the opposition unity candidate makes his first mass meeting. The occasion is his official signing up as a presidential candidate. Chavez will try to do one best on Monday but that is another story.

The fact of the matter is that the Unidad has planned a massive march/rally starting from different points of the city.  We will see how successful has been Capriles campaign at motivating people.  I will attend part of the event only because of family matters, but that part I will tweet it live with pictures as needed.  See you tomorrow at @danielduquenal
Posted by Daniel at 5:26 AM 5 comments:

The 2012 French Vote: the Venezuelan representative

After voting for president a few weeks ago, last Saturday for the first time ever I was allowed to vote for a Representative to the French National Assembly.  And it was quite a tale of woe, worthy of a Venezuelan "telenovela".