You could not? You won! There are no differences!

They share the same mental construct, those that rewrite or destroy history because they do not like it, because it is not convenient, or because they are idiots. Be they the chavistas who tumbled down the statue of Columbus in Caracas on October 2004, or ISIS fighters trashing the archeological museum at Mosul, they are the same crap. Nor do they care whether the pieces are original: what matters is the iconoclastic gesture. And if truly worthy pieces like in Bamiyan must be blown up, so be it.

What separates for now chavista jack asses from ISIS murderers is just  a matter of crime intensity and the specifics. In the end they are both the product of fundamentalist alienation.

¿No pudo? ¡Ganó! No hay diferencias.

Wednesday I was writing about the black market rate crossing the psychological barrier of 200 Bs. for a single USD. Well, two days after we have this:

And there you have your answer why the mayor of Caracas was taken "into custody" away from his nearly unguarded desk by a detachment of masked, truly secret, "anti terrorist" police that would have been , for its numbers, a source of envy to the marines that took down Bin Laden. I stress numbers because quality wise these assholes bullies were not even smart enough to take down the surveillance cameras. Then again they may have wanted to advertise their brutality.

And there you have the answer on why suddenly protesters bodies are found, tied up, a bullet in the head, kind of mafia style execution. Of course it is not the police, it is the "colectivos" to whom the police gave the arrested protesters. A terror scheme that is imported straight from Cuba.

And there you have why the regime allowed use of deadly weaponry to control protests, a fateful decision that had its first victim with a 14 years old child out of high school, trying go help an injured protester.

Simply put, the bloated corrupt bureaucracy is unable to accept its responsibility in the economic mess that Venezuela is today, running fast toward collapse as the black market drop of 10% in two days indicates with extreme clarity. The extraordinary selfishness of a corrupt military class has been the real factor that has stopped any sensible reform in the face of the looming crisis because, I suppose, they were ready to kill, preferred to kill before giving up their privileges.

That is how ALL revolutions end, in a blood bath, the last step before a new civilized order can emerge again.
Posted by Daniel at 2:48 PM 8 comments:

On January 16 I wrote that the Bolivar at 175 for a single dollar may sound expensive but if the regime were not to take REAL measures (it has not) within weeks that 175 would be cheap. There it is today, the black market value has crossed the 200 line even though the SIMADI was claimed to be the way in which the regime would kill black market. This one, it seems, is alive and well.  Apparently no one inside the regime seems to understand that no matter what gimmicks they invent the value of a currency depends upon which solid currency it can rest (gold, dollars or euros, same difference). It does not rest on revolutionary "values". (note that even the limited cash exchange value at Cucuta, the one to avoid bank commissions and delays, is at 179 and thus higher than SIMADI!)

Too many things have happened since I posted last on February 2. No point recapping it all. Then again people consult blogs more for interpretation and opinion than news. At least this is what I do. Google News does a fine job to keep you up to date (though not on Venezuela as official media is now so dense that it is hard to fish out real news #GoogleFail).

Why is the regime jailing private enterprise owners (and this blogger at risk).

There is a very simple answer for that: the regime needs a scapegoat that pays with its hardcore, Luddite, take no hostage, resentful base. The question would be more interesting if worded differently: why does it pay to jail a few business owners?

Why the regime has/has-not "devaluated" the currency

WARNING! entry plagued with "quotation marks" for reasons that will become apparent.

One of the surprising things that this blog has been wondering out loud for the last year and a half is "how come that the regime knowing full well that disaster looms imminent is apparently unable to take any, ANY corrective measures"? The very latest entry on this was "the fiscal problem" last January. And yet, the change in currency rules over a week ago was, well, a mountain birthing a mouse.

Yes, there was a devaluation of the currency.

I can only but be oxymoronic tonight. One one hand I am not surprised at all by the violent arrest of Caracas Mayor Antonio Ledezma. On the other hand I cannot fail to be worried at how fast the regime has started crossing lines, maybe a line of no return tonight.

The regime tonight has crossed one of those big, sloppy, obvious, dangerous red lines tonight. The kind of crossing from where there might not be a return point. Not that I am picky on that, as far as I am concerned that red line was crossed when RCTV was closed. But I digress.

One year ago the regime started its nemesis

One year ago the regime decided to put Leopoldo Lopez in jail. The error of that is now clear for all, even for the regime that is seriously considering killing him.

Why we are flat broke and in an nonviable system

To say that we are flat broke requires no explanation. All the indicators, from inflation to black market currency, from crash in importations to crash in oil prices, are all well known, vox populi if you wish. Equally well known the daunting corruption of the last decade and the wasted money in buying foreign sympathies.

Thus there is no point to waste my and your time in rehashing the reasons why we are out of cash. Only the brain washed chavista would dare to argue that. But there is a lesser known fact, or rather less studied fact which is the societal changes in the last decade and a half which makes it more difficult for Venezuela to recover, even if a new creative and honest management were to be swept into office. I have made a graph to try to drive my point in.

Why there cannot be a peaceful transition

The reason there cannot be a peaceful transition you can find it in the most recent and devastating moment for the upper chavismo: the flight of Leamsy Salazar to the US and his rattling about Diosdado Cabello as a capo de drug mafia. "Cartel de los Soles" they call it, for the "suns" that mark the Venezuelan generals' uniforms.

Before I continue, the dictatorial nature of the regime is fully acknowledged in the foreign press as the word "defection" is used instead of, say, escape, surrender, exile.... Cold war memories....

Now, a smart observer would point out "so, what else is new?". Indeed. It has been years that Venezuela is accused of having become a narco state, or becoming one. There are lists from the DEA, people almost arrested outside of Venezuela, people that already defected to the USA, etc. We all know that Diosdado Cabello, even without Leamsy, richly deserves to rot in jail for the rest of his life. So what else is new?

Homage to the Venezuelan student (Repost)

I thought that with all the troubles these days in Venezuela I should return to blogging by repeating the post of February 15, 2014. One year later and were are we at? 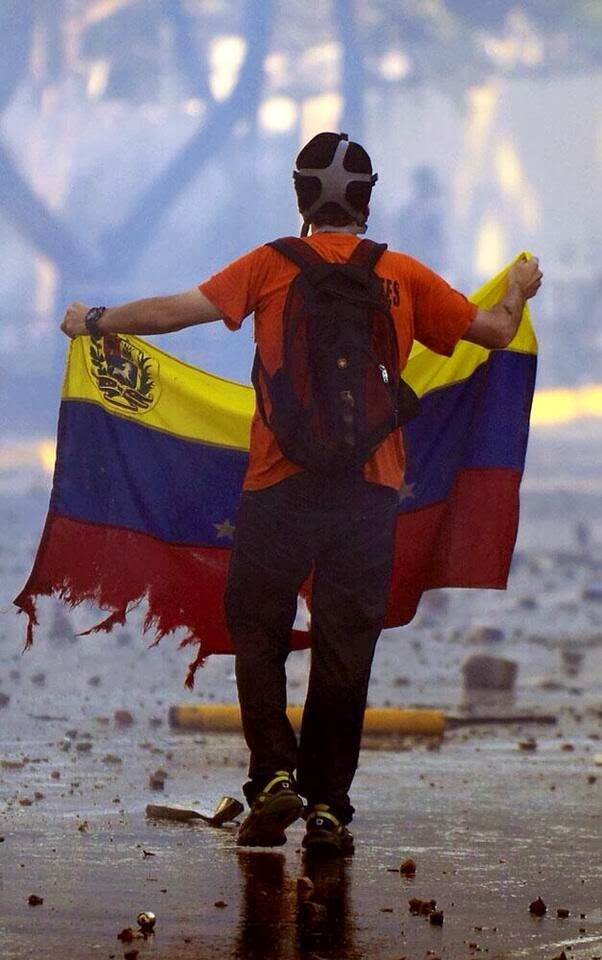 Patricia Janiot does Maduro in (and the bolivarian farce)

Patricia Janiot is a star reporter of CNN "en español". She has been a frequent visitor to Venezuela and was even conspued by Chavez publicly at a press conference. Her latest bout with the revolution was when she was obliged to leave in a hurry a year ago.

In defence of your nation, religion, and laws,

Today the regime decided to intervene Farmatodo, the big pharmacy store chain of Venezuela, the first one to operate US style (all, from medicines to pop sodas). And it did so nastily by putting in jail its CEO and attendants.

I have started to read "À la recherche du temps perdu" a labor that probably will consume the rest of my life. But worthy, as I think it will give many a post title idea. For this first inspiration I though that if one would ever want to write an anti-Proustian opus, one where vulgarity and low instincts would reign supreme, Bolivarian Venezuela would offer a mine of ideas for characters and plots. And Diosdado Cabello could easily be the main character. Or at least a Baron de Charlus that went really, really bad. Some would say that the pigs at Animal Farm would be a better literary allusion when talking about Diosdado Cabello, a case strongly made through some telling pictures. Let the reader chose the version.

The point is that Diosdado Cabello made major headlines this week. It seems that the regime has reached such a degree of totalitarian corruption that people are simply outright deserting and asking witness protection programs. After all, when you deal with drug dealing mafias, this is the least you should demand. Which is what a certain Leamsy Salazar decided to do with a few folks. See, after having been one of the top security for Chavez, he was asked by Cabello to work for him once the demi God returned to the bolivarian Olympus. Apparently Leamsy did not like his fall from Elysium to Hades and is currently rattling about Cabello at the DEA.