Halloween in Venezuela: is Chavez hiding or coming out?

The real stuff always show up at some point: Rafael Ramirez unplugged.

Venezuelan political class is celebrating Halloween a little bit late this year. We had the masked inflation prices, the masked propaganda advantage and the unmasking of the PDVSA president blackmail on his employees. This third one is of course the very best scandal that one coudl wish to expose chavismo, but indulge me if I go first into the other two unmaskings. Those Ramirez words should deserve a special post but since the three items I narrate today are the lies of a desperate government, I will reserve the best for the end of the post.

The inflation that was not

After three month of continuous increase in inflation, rumors that the Central Bank was about to “change the instrument of price measuring to accommodate social factors” (or some revolutionary jargon like that) the inflation index came down this month, ever so conveniently for the Chavez campaign. Still, the real number must be pretty bad since for all its tricks the government still acknowledges a 0.7% inflation for October.

The funniest thing of course was food that went down 0.1%, while, AT THE SAME TIME recognizing that the prices controlled items did go up anyway. But that is OK, I am not going to try to figure out these contradictions. Instead I will, once again, describe how the Central Bank does measure prices on food: it goes to Mercal. Thus it is easy to lower inflation by selling under cost the Mercal goods.

Now, that the government is giving huge year end bonus to public employees (we are in an electoral year, remember?) it is anyone guess what this sudden surge of cash in the economy will do to the real inflation number of November, to be published 2 days before the election. 0.2%? 1.4%? -0.3%? Your guess is as good as mine. Meanwhile at my San Felipe Central Madereinse I know how prices keep increasing no matter what the BCV says. People know, even is they do Mercal: after all they still must go to the Buhoneros (no price control there) or to el abasto as Mercal is, well, lacking in a few items. No make up can hide that.

Oh! And by the way, the street market for the Bolivar reached 2,900 this week, and the official exchange rate is still at 2,150. Does not seem to help much the inflation control, does it?

The obscene electoral advantage that is

This is sweet and short. Sumate published today the ration of hours spent by the government to promote Chavez versus the adds that Rosales must pay with donor money.

For every 1 second of Rosales air time Chavez gets 21. Breaking all the rules along the way since a lot of this is indirect advertisement as all state agencies advertisement now is an all but naked advertisement for Chavez. At tax payer expense, of course. In English here.

Rafael Ramirez: a fascist is born

It all happened when I was at work and I learned about it coming back home, where already 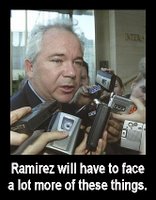 three e-mails of the transcript of Ramirez words were waiting for me. Briefly. Rafael Ramirez is the minister of Oil and energy but he is also the president of PDVSA. That is he is his own boss, his own regulator agent, his own accountant, his own investor, his own spender, his own supervisor. The only person he refers to is Chavez. PERIOD.

Thus one should not be surprised about the extensively murky oil numbers in Venezuela, or the black hole that the "direct" PDVSA contribution to the budget are. I do not know whether Ramirez is a corrupt official, or if only takes on occasion a few paper clips home. But one thing is certain, Ramirez knows full well how much money is the Venezuelan state diverting from the regular channels for purposes that are not in the constitution and which serve only for the promotion of Chavez. Thus Ramirez will go to jail if Chavez leaves office, even if Ramirez did not even bring a paper clip home. Ramirez has covered up for the biggest fraud in our history.

It is important to understand this before I get in the video of Ramirez that was presented today. The video shows a desperate man that knows he is in trouble and is willing to take a few down with him if he must.

The video that was released today was at a meeting with PDVSA employees (in English here, complete Spanish note here). Apparently there is some dissension in PDVSA as the outrage is perhaps getting a little bit too much for the real good and honest chavistas. Someone, possibly helped by some friends (the way the video was filmed and the locale almost imply collusion between some employees), filmed with an amateur camera which allows us to hear the words, not always fully intelligible, of Ramirez. Still, what was filmed was so damming that Ramirez should not only be fired today, but should even face prosecution by chavismo. Of course, no one is holding its breath on this eventuality.

The transcript appeared in all major papers by mid after noon. I am just taking the one from El Universal but you can go to your favorite media, from Globovision to Tal Cual and see complete articles accompanied with the transcript. It is this big. To close this post I will pick some excerpts and just say what law or ethical paradigm is violated by Ramirez, who as of today deserves the adjective of fascist, instead of his very prized Bolivarian. Another desguise falls and reveals the truth behind chavismo. Simon Bolivar would have never allowed anyone working for him to say such a speech, all historical context considered

My translation of a few parts with the appropriate [comments].

That no manager, no public servant of the ministry, no employee, not a single military, no one in the paramilitary reserve, no one at all that is here in the new PDVSA should have an ounce of a doubt that the new PDVSA is with President Chavez. [no crime there, but is it a nice intro for the rest]

As we told yesterday to the press that the new PDVSA is red, all red up and down [violation of the electoral code]

I want you to shake out of your head the topic that one could sanction us, that one could criticize us if we express to our people that this company is supporting President Chavez 100% [Where should I start? Abuse of authority? Violation of constitution? Willful ignorance of the law? Disrespect to the judicial system? Open rebellion? Plain corruption? The mind goes blank hearing this shit!]

… we are not going to allow that someone within the company repress or freezes the expression of our people or our workers in support of President Chavez. [Discrimination as the implication is that you cannot support openly Rosales within the work. But also it promotes political activities in a place of business instead of working for Venezuelan good. How should we sanction that? Corruption? Abuse of authority? Discrimination? All and more?]

Here we are going to support President Chavez, who is the maximum leader of the revolution … and whomever does not feel right about should must surrender his job to a bolivarian [Where should I start again?]


… this is what we wanted to tell you in a direct way so as not to leave any doubt, that there is no surprise when we take the actions that we have to take to line up the strength of this business in the defense of the supreme interests of our people which are those expressed by President Chavez [no additional crime there, except the one of sycophancy and utter stupidity and servility to a man instead of to the nation]

Our hand does not shake, we have taken out 19,500 enemies of this country and we are ready to keep doing so, to guarantee that this company keeps in line and correspond to the love that our people has expressed to our President [I mean, what can one say… This is so bad, this is such an acknowledgment of all the crimes committed inside PDVSA since 2003 that only on this sentence Ramirez Hill go to jail as soon as Chavez is out of office. Ramirez knows that and he simply shows he is ready to break law after law to secure his position. Willful announcement to break the law is already a crime per se]

I am insulted … that we find people Ni-Ni in here, chavistas light, that there are people that say that we need to open up this thing. No sir, here the one that will forget that wee are in the middle of a revolution we are going to remind him by hitting him hard ["carajazos" physical roughing up, trashing up, hitting to blood if needed] because here this company is with the President [This is an unacceptable appeal to violence, an open threat of physical violence. Ramirez with this has officially become a fascist. There is no way around, I heard the words, there is no escape. He is calling for physical violence against people who do not agree with Chavez. How many laws, constitutional articles are violated with this sentence?]

I demand combativeness, I demand that all of our managers have to be the toughest of the toughest … or we must leave the place to folks more revolutionary than ourselves. [Words fail me…]


(follows a ranting on imperialism and anti US sentiment de riguer).
We are going to free Bolivia, you know. From here we go to a cabinet meeting because we are going with all our weapons to play Bolivia’s future with Evo Morales [So, to all the previous violations which can be simply summarized as fascism, we can add acknowledgement of official intervention in other countries internal affairs. Fine, maybe the US is intervening in Bolivia but Venezuela should from now on shut up because Ramirez has acknowledged that he is involved in foreign intervention]

The Rosales campaign has announced that Ramirez will be denounced in front of the OAS, the EU and several Human Rights agencies. Enough is enough!
Posted by Daniel at 12:24 AM