Nuremberg at El Poliedro: how can dialogue be possible in Venezuela?

These past few days have given us a lot of material for future discussion. One piece to discuss without fault was the show yesterday at El Poliedro, the big sports/concert arena of Caracas. Chavez does not like to use it that much as on occasion he has not been able to fill it up all the way. But Thursday night was a no miss affair as he was swearing in new members of the PSUV party; and as it is the case in such mass movement of a proto-totalitarian nature, people walk over each other to be the first ones to sign in and access to the high positions as fast as possible.

So, Chavez got a good crowd and interesting pictures to promote his new party (for those who

are into this sort of things, even if the picture I chose here as a chilling big-brotherish feel). But Chavez being Chavez he could not resist holding the podium for hours, blocking exits for people: in chavista events once you are in you cannot leave for "security reasons"; I know that from many people that have had to attend such events. Obviously a camera that would catch people leaving a Chavez speech would be very bad for his image. And Chavez being Chavez, well, he again made one of those announcements that makes wonder where we are really heading.

This time the target was Sucre governor Ramon Martinez. Since recently public lynching have become a state media policy, now it was the turn to Chavez to confirm this by attacking, insulting, berating and what not the Sucre state governor who was already a governor when Chavez was a nobody. Martinez is somebody who greatly contributed to the rise of Chavez to power, someone who was a frequent guest to Alo Presidente. But those were the days. Now the least of the words hurled against Martinez was to ask for a Recall Vote on him.

Now, I certainly do not mean to defend Martinez, his reputation of a crook is only too well established and he has been laughing too much at those who have been insulted by Chavez. Nobody is expected to come out to defend him, himself becoming a victim of the system he so happily created and used to remove his own enemies. The Niemoller principle will apply to him without mercy as he was an active participant in the prosecution of others. 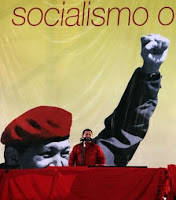 No, the reason for this post is to reflect about what is in store for us if Chavez can so vilely attack on of his heretofore close ally. The ire of Chavez is so intense that one can wonder if there is any possibility of dialogue left in Venezuela. If such a faithful follower as Martinez (or Aragua's Didalco Bolivar) are treated worse than crap, can we expect dialogue to ever occur between chavismo and anyone not linked to it? This is indeed one of the surest signs of our slow glide toward some modern tropical totalitarianism. We see these symptoms everywhere, from the horrifying attacks on Martinez accused among other things of belonging to a sect (?) to the orchestrated campaign against international media, a campaign echoed in Internet and by any public servant showing up at any media or political function. Always in such case the character of the person is attacked, the arguments never discussed back. There is no more pretense anywhere from any of the chavista emissaries: the marching orders are to tag anyone of imperialists, reactionary, paid for US agent. In any of their variation. There is no message anymore, just unbridled disqualification as a human being. A threatening fist.

You can listen if you can stomach it, the video of the Chavez attack on Martinez put by the now infamous Lubrio Bracci(1). This guy, who is lined up with the chavista media, puts up in Youtube with a reasonable speed some of Chavez worst speeches, and apparently with great pride. That is, it does not seem to occur to Lubrio that there is something inherently wrong, inherently dehumanized in the way Chavez deals with people now. It has become normal for these people to treat badly anyone dissenting with them, be they Chavez or Chavez supporters the difference is not even a blur. Even the non Venezuelan supporters of Chavez seem to be hardening under such pressure. Look at the latest trip of modern age Tokyo Rose, Eva Golinger just geared to denounce the US conspiracy, perhaps barely addressing the wonders of the chavista pseudo revolution. Even alleged intellectuals like Greg Wilpert give a rather pitiful spectacle of themselves when confronted by verbally bland but hard as nails logic of Quico. It is that permeation of chavista intransigence, of utter disdain and even ill wishful thinking of anyone not toying the party/Chavez line that is to be worried about. That shows to us how far the totalitarian seed has been panted and has started germinating.

When I saw the pictures of yesterday rally at El Poliedro the historian in me immediately thought about Nuremberg. Not the Havana sea front of Castro events, at least on this respect Castro has managed to be more of an original. No, chavismo is slipping fast into the uniformity that characterizes totalitarian regimes. Look at the sea of red. Look at the idea of organization that the arrangement of El Poliedro seats manage to instill into the rather rowdy and messy Venezuelan crowds. I cannot remember in recent Venezuelan history such an organized or coordinated meeting in such a scale. Chavismo has been working hard at training his people to look more and more like a fearless organized militia, a new storm trooper of the XXI century, all ghoulishly red. A little bit also like the terror bearing Cultural Revolution militias of Mao's China.

Thus I leave you with that picture in Nuremberg while I remind you that barely 70 years separate them. 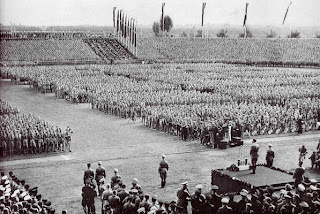 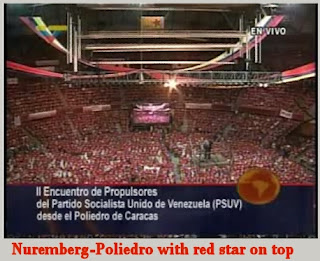 1) I am putting as a foot note the comments on the video. It is 20 minutes long and there is really no need to watch it all, unless you desperately want to find something that resembles a message. Well, there is one but it implied, not directly stated “do not do as Martinez or Bolivar or I will apply that method to you too”.

The opening sequence gives you a panoramic of the Poliedro. Observe the progressive crescendo against Martinez, who is only named at 1 minute in the segment, after already quite a piling up of criticism/attacks. Observe how Chavez shuts up the audience at 1:50.

Hear from the crowds at 5:00 the "Asi, asi, asi es que se gobierna" (this is how one should rule, particularly chilling there). And thus for 20 minutes, but by 5 minutes you got the complete feel of the event, the rest being repetition to sear in the mind of the attendees the power of the caudillo.