Images that say it all

I figured out that after two weeks of intense blogging and one week of astounding reactions from Chavez, it might be time to give a more restful post to the readers of the week end. I have compiled below two pictures and two cartoons that by themselves summarize perfectly well the reasons behind the defeat of Chavez. They also give us some serious hints as to what the future has for us.

Is there a future president in this group? 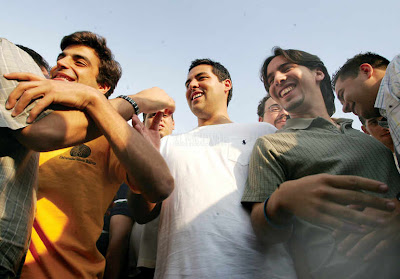 I suspect that this might be the image that has most upset Chavez this week. Assuming of course that El Nacional reaches his desk in Miraflores. However we can be pretty confident that this picture did because it was also the same issue of the article by Lugo-Galicia which elicited the scatological epithet that Chavez proffered.

It is difficult to overestimate the part the dissident students played in defeating Chavez last Sunday. When they burst on the scene last May after Chavez closed RCTV, nobody would have thought that 6 months alter they would bring down Chavez from his towering 63% victory of December 2006. Oh, they were not alone, along he way the opposition parties accepted to take second seats, PODEMOS and Baduel defected, milk went missing. But today who can deny that the student movement of May 2007 has become an essential character of the Venezuelan political scene? Some observers sensed it already in May, that the students would reveal the intellectual misery of chavismo, that Chavez was naked. This writer must again remind readers of his June post, a post who has proven to be prophetic.

Even Chavez, increasingly isolated at Miraflores, must have sensed in this image the power of youth, the renewal of ideas that his bloated self is now unable to offer. That is why these students must sleep in different houses every night, as Chavez is behaving everyday more like Herod than Jefferson.

What Chavez thinks of us 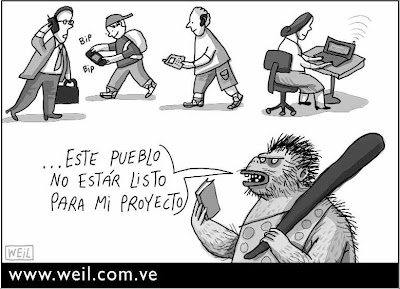 Weil gave us two splendid cartoons this week. When Chavez says that "the people is not ready for my project" he projects the utter disdain he has for us, the utter reactionary nature of his project. Not to mention how undemocratic his reaction is. Venezuelans are moving more and more into the global world and Chavez wants to hold them down, to silly communal farms, to meager XIX century like cooperatives, to outdated values. Even the old social and economical terms, he fails to update them into something that could be constructive, significant, appealing beyond the members of the cult. 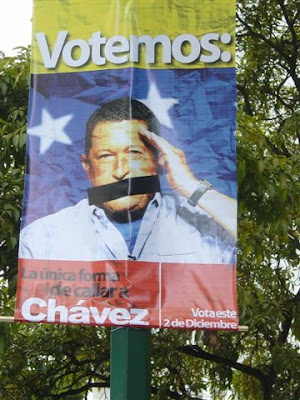 When all is said and done the reason we might have said NO is simply because we got sick and tired of Chavez incessant verbiage. This one has gotta be the best campaign poster of the 2007 season: "the only way to shut up Chavez, vote on December 2". 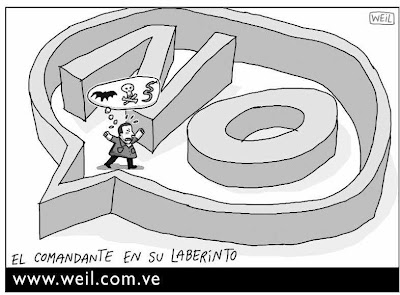 I do not know what is next, besides a possible restful Christmas once Chavez spews out his bile. However one thing is certain: Chavez is trapped in an impossible situation. The mismanagement of the referendum proposal, the greediness exhibited everywhere, have placed Chavez in a labyrinth from where no matter how much he screams and insults us it will be very difficult for him to escape. In fact, if he does not start taking in the defeat and the realization that the Venezuelan people had told him that he has 5 years in office and that is that, he might not even reach the end of these 5 years.

PS: for those who might not get all of these pictures, details are in the preceding 10 posts of this blog. This post is a summary of sorts.