The Venezuelan 2008 election: update 7. Still these many homeless?

I was thinking about writing another update before traveling but time did not allow. but I left this short post to illustrate in part why Chavez is in so much trouble. After 10 years in office almost the Guaire river still has many homeless camping in its crevices. Thus I think that these pictures by themselves are a perfect electoral update. All taken by me when I was stuck in an awful traffic jam in Caracas a few weeks ago. 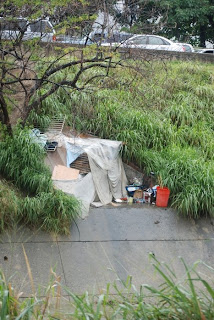 You can see the cars above stuck in the traffic jam. Below, just on the edge of the river contention, a homeless person has made quite a make shift construct out of cardboard and plastic sheets. I sure hope for them that they are careful at night as any sliding on this concrete slope would lead them to the heavily contaminated Guaire, with a sure death from infection or drowning if it is a rainy day.

This next one is not as glamorous. I do not know if it is abandoned or under construction. Considering that it is under a bridge, there might not be a pressing need for a roof. 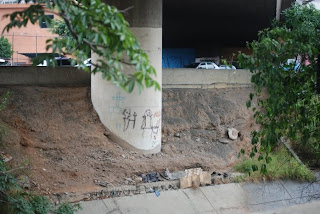 But if the government cannot be bothered with the homeless problem, it sure finds time and money to decorate politically a gas trucks also stuck in traffic above. 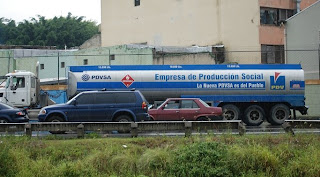 And then you wonder why for the first time chavistas are in trouble. After ten years, such sights from a "socialist" government are harder and harder to take.