Gustavo Dudamel finishes his first tour with the L.A. Philharmonic 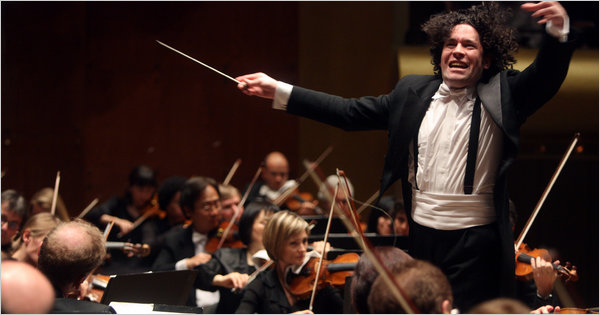 Gustavo Dudamel, the Venezuelan wunderkind that made it to director of the LA Philharmonic before he reached 30 years of age has just finished his first tour of the US.  The critics are not bad but not that good.  Unfortunately I am not surprised.

Dudamel is a product of the very successful youth orchestral system in Venezuela, a country who has always taken its musicians seriously, though demanding entertainment rather than weight.  In fact it is rather a paradox that a country where the infamous reggaeton is king today that such a cultural gem manages to survive, a perfect example of parallel countries if any.  Indeed, the youth orchestra system (also extended to jails) is one of the very few things that Chavez has not dared tamper with, yet.  The international reputation it gives Venezuela in the cultural spheres and the talent of its creator Jose Antonio Abreu to pass for chavista when needed has preserved the movement for the time being even if it is not as vigorous as it used to be before the Huns arrived in 1999.

Dudamel is indeed a product of that system in that he has inherited its brio but also its superficiality up to a point.  After all he has had the talent and the discipline to make it to the top orchestras of the world but as the critics pointed out (the Philadelphia Inquirer was the most negative) he lacks cohesion in running the orchestra, and even if not specifically mentioned, he suffers an implied lack of depth.  What he brings in is exuberance and excitement, which might be what classical music needs the most in this times of financial trouble....

I suspect that the problem is that Dudamel went too high too fast and that his appointment in L.A., if he is not careful, could result in a certain relegation to the pack.

I have been an early supporter of the different orchestras of the "Sistema", religiously attending performances in the late 70 ies among the gravel that the Teresa Carreño music center was shedding as it was being built.  I remember well these first enthusiastic concerts at the Felix Ribas hall of the Orquesta  Juvenil Simon Bolivar as sometimes construction workers were hammering who knows what somewhere else.  During my long years in the US I always tried to attend one of their concerts during my vacations home.  Who knows, I might even have seen one day a young Dudamel playing his violin in some performance.

Returning to Venezuela I was not anymore in Caracas and thus slowly I lost the habit.  Though considering the traffic and security concerns of Caracas, going at night to the symphony looks more and more like an expedition.  Still I managed to see Dudamel a couple of times.  Indeed, I sensed his talent, no question about it, even though the orchestra was not what he deserved.  That is not the fault of the musicians: in Venezuela they simply cannot afford the quality instruments the great US orchestra have.  And also youth and enthusiasm cannot always compensate for experience and trade.

I suspect that the main problem of Dudamel is that too many people want a piece of him and as such he has not been able to focus on what great directors are all about.

When I lived in the States I went as often to the symphony as my meager resources afforded me.  The best years where those in Baltimore when I befriended a co worker who was married with one of the main violins.  They knew I really liked the stuff and that I really liked the Baltimore Symphonic work.  Quite often when they knew it was not sold out, they let me in through the artists entrance to seek an empty seat (which did not stop me from having my season's subscription in due form, a fact they appreciated).  I know every corner of the Meyerhoff.

I have been able to listen to the great ones; the three of them, in my humble opinion, are the ones from Boston, Chicago and New York plus the Met one (though I thought that the Baltimore one did not have much to envy the big names).  I remember the excellence of Seiji Ozawa with Baroque and XX century  music while he sucked at the romantic repertoire (you need to be a Westerner to be good in that one, I am afraid).  And James Levine Gotterdamerung and Otello will remain two of my strongest musical moments ever.  I managed to see once Georg Solti with the Chicago on tour but I never fell in love with the New York Philharmonic and Avery Fisher Hall.  I suppose the shadow of the Met was just too strong for me and I preferred to scrap my scarce dollars to watch operas from the only seats I could afford, highest and most distant ones (one time I was so much on the side and high that I could only see the legs of the Tenor in a not so memorable performance anyway of some bel canto).

The problem of Dudamel is not the LA Philharmonic who is a good orchestra though I suspect one with less demands than the ones East Coast as glitz permeates everything in Los Angeles.  His problem is not that he tries to encompass too much repertory, falling to the trap that contemporary composers must be promoted regardless of their output quality.  Many of the recent great directors have directed all from Monteverdi to Gorecky.  But all have made a specialty somewhere which made them great.  I have the nagging suspicion that Dudamel has not given much thought about that (and promoting Latin Music as he did at a recent concert which included Helen Hunt is not what I have in mind).

Dudamel needs to focus on something he wants his name associated with.  A period, a composer, not just an area.He needs to demand more from himself so he can demand more from his audience. That he is director of a top orchestra (in the 5 to 10th US position) does not exempt him of the exercise. Only though this he will get the insight he needs to explore pretty much everything else he wants in the repertoire.  That is, of course, if he aims for more than the Venezuelan superficial glamour that is valued as a quality here....

If I may dare give him a piece of advice I would suggest that he works for a few years on Haydn, in particular his London Symphonies.  They do not have the dash of the Mozart ones perhaps, nor the emotion of the Romantic warhorses, but they seem to me to be best suited to focus the wild enthusiasm of Dudamel by teaching him tasteful restraint, something essential to avoid falling in the hysteria of some pieces like the Pathetic of Tchaikovsky for which Dudamel was panned.  I think Dudamel would be uniquely suited to bring back lively to the forefront Haydn, a great composer that has been rather neglected lately.  They might be mismatched in temperament but if anyone can make shine Haydn it would be Dudamel and if any composer can focus Dudamel intuition, force him to understand the essence of smoothness in musical transitions it is Haydn (I have in mind the E and B flat symphonies of the London set).

(Post written listening to Beethoven Triple concerto and Brahms double one).
Posted by Daniel at 10:11 PM