First week campaign round up: Chavez to the museum

We are Friday night and it is fair to evaluate how the first week for our flash elections went. 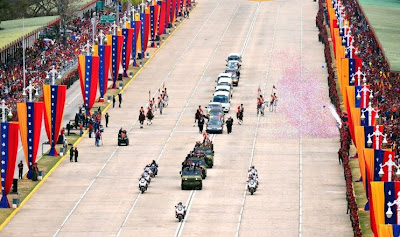 Needless to say that the marking moments have been the use of Chavez never ending funeral until today when he has been finally placed, for at least a few month, in a museum. How fitting for his backwardness of mind.....

Today images were quite disquieting as to the increasing fascist tone seen all around. I am parsing this post with a few images that show the clear Nurembergish concept,  including a very fascist arm band that even Tibisay Lucena, head of the electoral board CNE wore a few days ago. So much for an impartial umpire. You'll find her in a white shirt in one of these pictures.


In short today the regime stopped playing popular grief. Chavez is entering whatever Valhalla they have in mind. It was the real corpse in the casket and as such no chances were taken that the adoring crowd could touch it as it was the case a week ago when we thought that Chavez body was carried through the streets of Caracas when in fact the casket may have been filed up with bags of yucca. 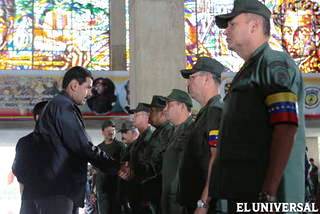 All was organized today to focus on the military, fascist arm band and all, even if one of the speakers said that Chavez arrived dead from Cuba... Today was meant to underline that the army was behind Maduro and that the only thing that counts in the country is the army. 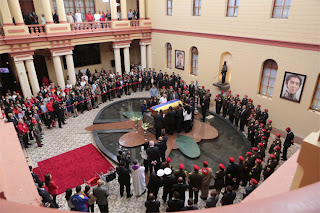 To underline this Chavez, of course, went to a military museum, where his provisional resting place is between two portraits of the Bolivar he invented. In the picture you can note that only military and family were allowed around the spot, a cord separating the civilians on the left. Sometimes I winder if they are themselves able to catch the irony or if indeed they are sick enough to do it on purpose.

At any rate, the imagery does not leave any doubt on Chavez link to Simon Bolivar even though this link was more and more frayed as his rule progress, as it was becoming clear that a child of the enlightenment could under no circumstance be associated with the historical regression that chavismo has represented for Venezuela. I write "represented" because the deed is done, now we must look for our way out of this mess. 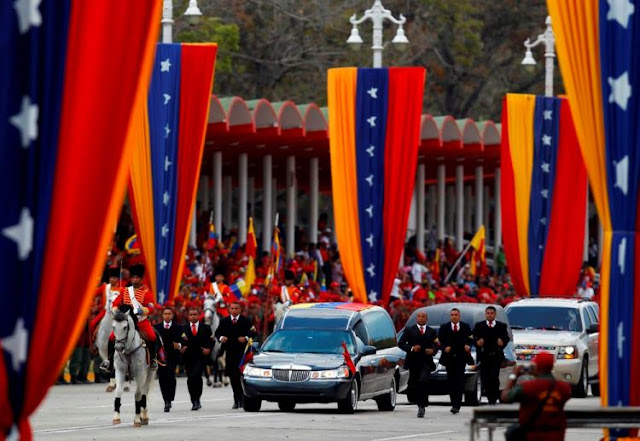 But has this been that good for chavismo? In a way I suspect that so much melodrama is tiring at least some of the supporters, amen of 10 days without beer sales in the country. I suspect it so because cadenas were up today but also tonight where the speech that Chavez made to name Maduro his heir was re-transmitted, and will be re-transmitted all over in cadena I am sure until April 14. As a matter of fact, Maduro having revealed himself to be an even worse candidate than one expected it is certain that Chavez will be doing the campaign once again from the grave, courtesy to MP4 formats.

The problem with this strategy, well, one of its problems anyway, is that it makes the measure of success of a Maduro election repeat the percentile score of October 7 2012. I am not saying he cannot do it, but if he presents himself as the heir of Chavez as the only thing that counts, any victory with less than 55% will make him weak, in the eyes of chavismo itself. 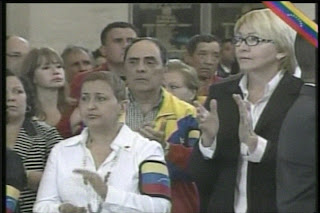 It is true that the help of the CNE will be tremendous but even though, besides actually stuffing the ballot boxes the CNE can guarantee a victory but not a 55% one. The big problem for Maduro campaign is that too much of Chavez emotionalism may have a perverse double effect: link him to Chavez but also project such an aura of victory that many chavista simply will not bother going to vote considering it a done thing. Without mentioning those, more numerous than you may think, who do not like Maduro, nor his work in his first fatal 100 days of rule. By the time we reach April 14, the country in 4 months may have reached a 10% inflation, a near 40% devaluation and a significant overall slowdown in production, aggravated by a dry season turning out to be drier than usual if the trend persists.

The opposition chances did not get any clearer this week. Besides accepting the challenge there was little that Capriles could do in a time where the regime has such an excuse to dominate the air waves. This is not going to be possible in the next 4 weeks, but they certainly will try to create other excuses. The opposition was thus deprived of its first week of campaign.

But all is not negative. The opposition alliance,  MUD, has proven solid this week as the campaign commando was set up without a hitch, including more folks than last election. It also seems that the electoral mobilization of the opposition is happening and there is no apparent reason why Capriles should not find his vote number of October 7, which should be enough to go above 45%, already a good result in the present circumstances. The abuse of the regime this week surely will repulse enough inside the opposition to drop any misgivings about going out again to vote, while it is not certain the abuse will mobilize in full chavismo, suffering of more abstention than it would like to admit.

But all of this is mere speculation at this point in the campaign. We can still count one full score for the opposition as chavismo has dropped its pretense to put along the presidential vote an amendment tot he Constitution to allow Chavez to make it to the Pantheon as of April 15. It is certain that such an amendment would have been a way to put Chavez in the ballot on April 14 and there would have been not the slightest chance for Capriles to win.

Why did chavismo pass on such a potential trump card? Well, there were "technical" constitutional problems to rush such an amendment. Not that this is a crucial point in a regime that has repeatedly violated the Constitution over the years, to the point of creating an illegal regime since the constitutional outright coup of January 9.  We must thank for this the real heavy weight that did not stay for the swearing in of Maduro: Roussef, Lula, Santos, Prince Felipe, Cristina K...  The message was clear: make an election clean enough that we can recognize. And putting an amendment along the all pervasive cheating already known would have turned this one into a fraudulent plebiscite and give credibility to opposition charges of electoral fraud. Not that these guys would have done much to help the return of democracy in Venezuela but the regime has already enough economical problems to add to it an opposition with increased credibility on the fraud thinggy.