For yours truly, of course, no objectivity here. (1) 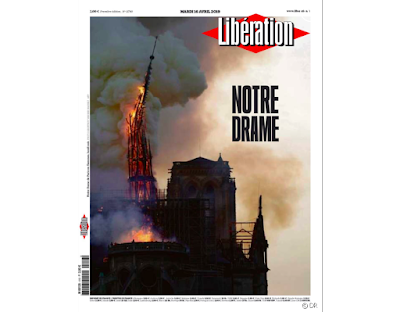 I pick as the marking moment of 2019 the burning down of Notre Dame in Paris. Why? Because it was infinitely more than a Church going down in flames, it was a hit on one of the main symbols of Western civilization. Period.

On the right the newspaper cover that is my "cover of the year", by Liberation, a progressive newspaper that was able to put aside any religious content to convey all the meaning on the moment. Notre Drame means our drama.  A truly national drama in France.


For Venezuela I will pick up how fast Venezuelans ditched their currency, Bs., for the regime hated greenback, the imperial USD.  After years of howling against the dollar, the regime this year allowed its private use and today maybe more than half the transactions in the country are made in cash or transfers in dollars.  There is no better way to illustrate the economic failure of communist chavismo but for this one to accept the demise of its currency. Amen that it is a good way to launder narco money.

For Latin America, the year of the protest for the sake of protesting. You know who you are. With a side medal for a kind of journalism that takes upon itself to decide which are the good and bad protests.

For North America I want to point out that Lopez Obrador caved upon the demands of the narco groups of Northern Mexico. Draw your own conclusions.

For Europe, Brexit. A sad moment when an exhausted UK picked a populist prime minister to finish Brexit, an event that perhaps a majority do not want anymore but want to get over with it.  But since there will be no second referendum we will never know.  And if brexiters think they are done with Europe, they may want to think again. (2)

For Asia apparently too many to pick, from Chinese concentration camps to India increasing authoritarian Modi. But one emerges without a doubt: the fight for democracy in Hong Kong. A brave people they are.

Africa? Its usual mess. Oceania? Its usual civility.  But a mention to the democracy protests in Algeria and the banning of assault weapons in New Zealand. Yes, you can!

1) Outside of mu personal grief from the loss of my life partner in December 2018 to the loss this year of my Dad, my mother in law and my health.

2) I was tempted to add the arrival of pro Chavez PODEMOS as a junior partner in the oncoming Spanish government, but it has not been sworn in yet as I type.  Poor Spain......
Posted by Daniel at 10:00 AM