And thus we reach the eve of the election. I have been postponing as long as possible giving my final predictions because, well, they were changing back and forth as the days went by and as I dug further in regional parameters. Thus before I give my predictions it might be good to review what happened in the last months of campaign and how that might have affected the outcome.

Did Chavez benefit from his aggressive style?

A difficult question to answer. Certainly I think, as some serious pollsters do, that Chavez did mobilize better his hard core base. But did that work for the chavista closer to NiNi-ism?

The fact of the matter is that in 2007 Chavez went missing 3 million votes. Note: the opposition missed half a million itself. I think it would be easier to quote myself from last December analysis:

Chavez has claimed that 3 million votes were missing. This is not quite true. If we assume that all that the CNE says is to be trusted, not a small IF, Chavez went down from 7.309 K in 2006 to 4.379 K [December 2007]. But of these 3 million as much as 500 K belong to the opposition abstention [itself]. The 3 million [chavista abstention is] in fact 2.5 and split 600 K to the NO and 1.900 K actual abstention. How much of that 1.9 million is actual "normal" abstention or a deliberate staying at home rather than go and vote NO is not known. Of course, chavismo is not prepared to say that at the very least half a million "chavistas" went over to the NO and prefers to present it as 3 million "lost" to abstention votes.

The strategy of chavismo was thus to bring back these voters, assuming that they were chavistas that did not vote then but surely would vote again for Chavez, not for the opposition. Thus massive spending was made to try to diminish as much as possible the negatives of 2007 such as food scarcity. That seems to have worked some, Chavez personal numbers improved somewhat but Chavez associates did not...

The ensuing radicalization of the political speech certainly did mobilize the core, revenge-seeking chavista base, a portion that probably abstained significantly in 2007 because the issues were too complex for these people interested in immediate rewards, monetary or revenge, it does not matter. Maybe Chavez violent insults and threats did appeal to this people, but they also displeased some more civilian chavistas. Which shift is larger? My guess is that Chavez will recover some of the 2.5 million lost folks but not all. A million maybe because his violent speech cannot compensate for the failures that people observe at local level from the chavista crop of elected officials in 2004.

Did the opposition win in 2007 or was it abstention?

This question is asked in a facetious title because it is the great unknown of 2007. If the opposition lost half a million of its voters from 2006 to 2007 did it win because half a million chavista voted NO? Will these vote against Chavez again? Hard to say. However we can be sure of one thing: there is no reason to expect less voting this time around for the opposition. In one year Chavez has done nothing to bring back the cross over voters. In fact by stating clearly that the only thing he wants is reelection by proposing a future amendment he alienates once and for all these cross over voting. I expect that the opposition will not only get its 2007 number but recover a large chunk of its own abstention. Thus the opposition number might rise "naturally" by half a million, remaining behind chavismo by half a million only. If this happen then the opposition will not win more than 5 states because a large chunk of its increase will come from Zulia alone.

This time around I cannot predict the actual number result as I did in 2007 to a surprising success. Nor should I try. A referendum has clearer parameters to allow a prediction for final numbers. In regional elections the parameters can vary wildly due to local issues and local candidates character. Thus I will limit myself to a range into which each camp will fall (note: prediction at the governors level, without counting the Alcaldia Mayor of Caracas who would count as double voting).

I know, I know, it is a cope out of sorts to give such wide ranges so I will add that chavismo will get more votes than the opposition but that it will be less than 500.000 above. In other words the 3 million difference of 2006 between Rosales and Chavez would have been reduced to half a million difference with all the consequences that this will bring. Note, I am not counting the dissident vote as in the future they might go either way. They could reach more than half a million themselves and explain why chavismo will not get more than half a million above total opposition vote. BUT, and this is important, the opposition+dissidence will go within less than 200.000 of chavismo, if not barely above. Below chavismo still but way too close for comfort for Chavez future plans.

In this table below I have regrouped all the predictions I did in the "regional politics" series. I have simplified by cutting off many town halls of interest just keeping the most significant ones. I have also updated some results as new data reached me. Click to enlarge. 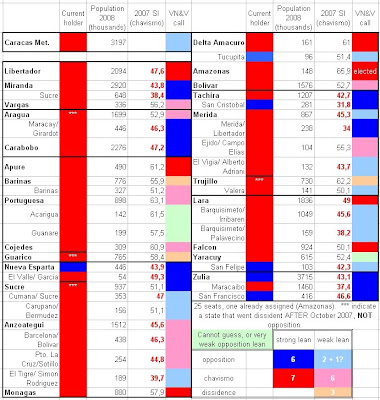 You can observe that I put the Chavez radicalization effect at recovering states that were weakly leaning for the opposition such as Anzoategui or Aragua. That is, what was gained by the opposition seems to remain gained, but what could have been won, is not anymore.

Clearly, if I get only 80% right Venezuela will have a much more varied political landscape Monday 24. Note: contrary to the chavista propaganda I include the states that were fully pro Chavez until October 2007 as red states. After all, Guarico and Trujillo became "opposition" not even 6 months ago. Chavista spinning at its silliest. I might try to write a post on Yaracuy tomorrow explaining why I refuse to decide where it will go.

How to decide who will win, REALLY?

The point here is that when Chavez decided to turn the election into yet another plebiscite on him he improved his chances to win more states but he also decided to risk carrying the full brunt of any loss that might occur. That is, in July 2008 an 8 state victory of the opposition would have been considered good. A 10 state victory a major blow to Chavez. Now, 8 states will be a major blow to Chavez and as low as 5 states would be an excellent result for the opposition, depending on which are those states. For example, how can you spin positive for chavismo that the opposition "only" won Miranda, Carabobo, Zulia, Aragua and Caracas at large? Replace Aragua by Sucre and Nueva Esparta and the spin does not work any better.

To try to convey this into a visual I have crated this graph below, a little bit complex at first but follow me and you will understand better. 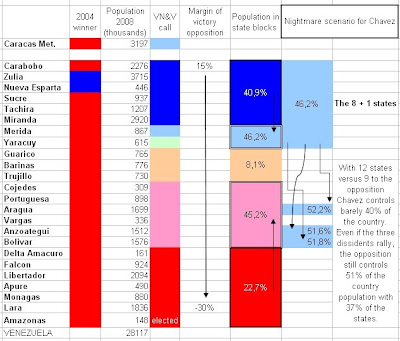 In the first column after the states name I rate each state as it was won in 2004, not getting into the "how long it remained chavista". The second column is a rounded population number in thousands. Third column are my predictions, with a non call for Yaracuy and a wild guess for the three states where dissidents have a shot. The next column explains how I classified the states: by margin of victory. Thus I have put Carabobo first because I think that Salas Feo is going to trash Mario Silva even though he might not reach 50% of the total vote. The trashing is artificial, due to the Silva/Acosta split. But Zulia could easily reach a 20% spread too. And so on until the lower states where Lara is going to be a walk in the park for Henry Falcon assured of 30% more than his immediate follower.

The 5 column is more interesting. There I have calculated what percentage of the population will be under opposition administration AFTER November 23. If my predictions turn true, of course. Same thing for chavismo. As you can see the chavista "sure states" do not even reach 30% of the population whereas the opposition "sure states" reach 40%!! Now, if we add to this all the "tending to" states, chavismo now gets more states than the opposition but still does not get a majority of the population!!! in other words Chavez ability to keep running the country as he wishes will depend on whether he can beat the "dissident" or come to terms with them if they win next Sunday.

In other words you can see by yourself that if the opposition wins "only" the six states I indicate it will still be a good win for it and a defeat for Chavez. A paradox from afar but a reality when you know what is going on.

But there is a "nightmare scenario" for Chavez. Let's assume that the opposition wins its 6 seats and the two weak leanings of Merida and Yaracuy. If any of Aragua, or Bolivar or Anzoategui were to also fall in the opposition hands, this one would rule over 50% of the country (the three arrows in the column) . With only 8 + 1 states!!! And this in spite of 15 pro Chavez and dissident states....

In other words, when you see the results Sunday night, it will not be a matter of whom has the most states to decide who won: Chavez will get the most states. The victor will be the opposition if it reaches more than 40% of the country population. Not even 50% are needed because the incredible unfair advantage of Chavez during election could make a 40% victory a stunning one. I can assure you that even the chavista hoi polloi will get that!

PS: of course, the result of 23 night night that might eclipse any other result is a dissident victory in Barinas, Chavez home state.