VN&V electoral map courtesy of AM

AM blog has also been following the election and putting up polls that I have used, as well as maps and other goodies. Yesterday he put up the map with his predictions, Caracas Chronicles' and mine. Thus I am taking the liberty to post here the lifted map of my results and for those who can read Spanish his link so you can go and visit, look at the other prediction maps he has (pollsters and bloggers) and thank him for his hard work. 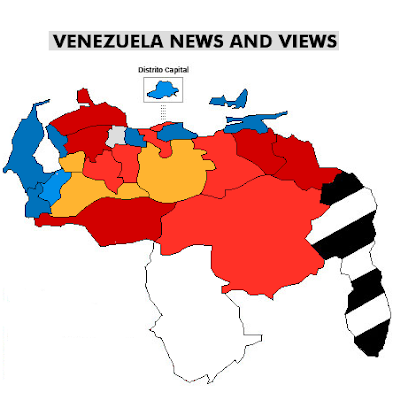 From AM format he considers Distrito Capital what I call Caracas Mayor at large. That is why it appears in light blue. Nobody really seems to care about Libertador even though it is the largest municipal district in Venezuela. Oh well... I am the only one that gives that district to Ledezma, by the way.

Otherwise there is really not that much difference unless you go into the pro Chavez pollsters whose red is so deep that it risks overflowing Curaçao, Guyana and Colombia....

Some folks think that I am too optimistic, some too pessimistic. Some are pessimistic themselves and ready to downgrade their predictions, like Quico who has been burnt once too many at this prediction business. I suppose that in a way I am optimistic in that I decided that the anger over potholes remaining unfixed and power outages will be able to overcome any chavista machinery at play tomorrow. I also assume that the mayor candidates who feel they have a chance at winning will make sure to have their own local machinery at work too, which should benefit the opposition candidates for governor. The Chavez machinery will make a difference in the states painted pink. Thus I am at peace with my predictions and feel no need to change anything. After all I am conservative in a way since I only give 6 for the opposition and a possible Merida as 7th. The reason of my inner peace, so to speak, is that I consider a 6 states gain a solid victory, not great but solid, improved by whatever the chavista dissidence manages to get. After all the opposition has made too many mistakes and it cannot hope to turn the tables in one single election.

AM considers Henri Falcon as a dissident. I am not ready to give him that label but in truth he probably is. I do happen to have a chavista relative in Barquisimeto. Yes, all families have a black sheep. I was astounded when he told me yesterday that he was not going to vote for Falcon because he considers him a traitor. He was angry enough that he will not vote at all, not even for the mayor election.