Long time readers of this blog must recall my love of maps and charts, and the electoral ones best.  The French are truly the masters of the genre.  In a previous post I pointed out the ones from Liberation which I judged in the past easiest and best.  But this time around Le Monde came back swinging and bringing some real great stuff, not only to analyze the result of last Sunday but also to start looking at the implications for the legislative vote of June.  Oh dear...  if in Venezuela we could get something a quarter that good...  but then again, what for?, considering the elector motivations in this joint.....  So, for those of you nerdy enough to love such stuff, click on and enjoy.

Le Monde gives us an interactive map that works, really works.  It goes down to the individual municipal councils which in France can be very small, to barely a couple of hundred voters.  You can play with all sorts of parameters, from the districts where Sarkozy won by more than X% to those where Hollande and his socialists scored more than in 2007.  Plus the 2007 results if you wish.  I pulled out a couple of these results.

In the first one I set the criteria to those districts where Hollande got more than 50% and Sarkozy more than 50% (you can drop to a faint hue with 30%).  The idea is to  illustrate how stark the division of France has become.  The Socialists do control now the South West, most of the West and a densely populated strip in the North.  To which you must add the conquest of Paris which used to be the stronghold of the right in the times of Chirac (Paris is magnified in the top right, and on the left the different islands that are France elsewhere in the world and which are for French law equal to anyone living in France). 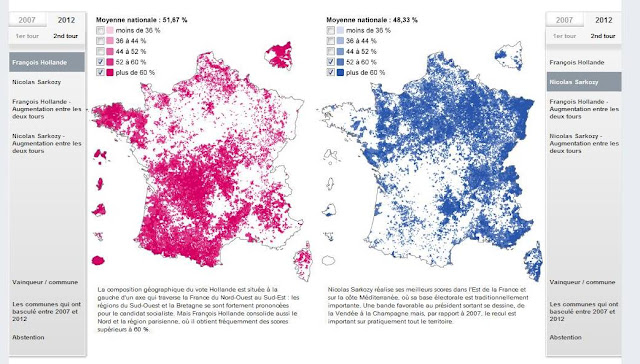 I am not going to go into a historical explanation of this because this is after all a blog on Venezuela.  The point here is to show how maps should be made to be meaningful (questions on French political culture in comments if you wish).  Observe that the interactive map above has an equal set of controls on each side.  That is, you can even Compare Hollande with Hollande if you wish, for example the distribution of his medium scoring districts to his high scoring, or 2007 versus 2012, etc....  In other words you really do not need a pundit like yours truly: just go and make the map that allows you to understand best or that has the most meaning for you.

The second one I am showing are those districts that switched side (regardless of their actual population) from 2007 to 2012. 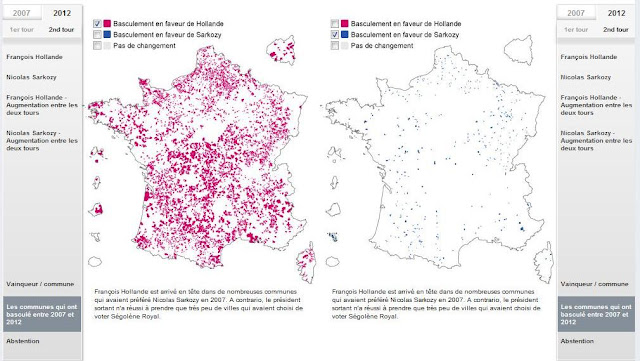 This map I like a lot because it reflects the burden of politics: you cannot please everyone.  Sarkozy did please many people, as seen on the right where not an insignificant number of districts did go left to right (in spite of his personal decline). But he was overwhelmed by those who he pissed off as the huge number of districts that went right to left shows on the left side.

I cannot resist to add one more map out of this "game": comparing where Le Pen got more than 13 % and where Melenchon got more than 10.6% (I do not know why Le Monde uses different criteria!). 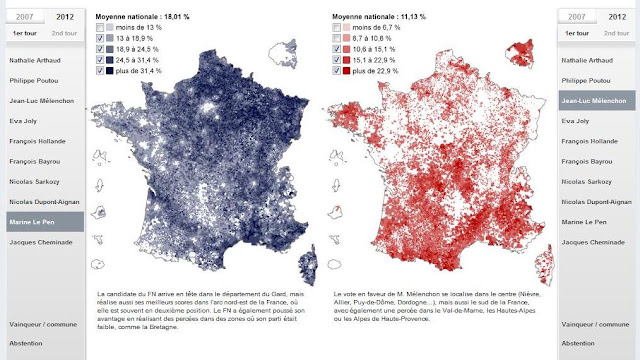 Clearly the map of extremes complement each other and, interestingly, do not match necessarily the extremes we would expect from the previous maps.  That is, a victory of Sarkozy does not imply a strong showing for Le Pen, like in the West.  Similar observation for Hollande's push in the South West corner not quite matched by the protest vote of Melanchon.  Or the islands which seem immune to the protest votes in France.  Whatever, adding up these two maps in your mind, you can conceive by yourself that everywhere in France more than 20% voters did the protest thinggy.....

Le Monde also started projecting these maps on actual electoral districts for representatives (they usually including several municipal districts of those shown above).

In the first map Le Monde looks at how the theoretical numbers would work out, based on last Sunday totals. 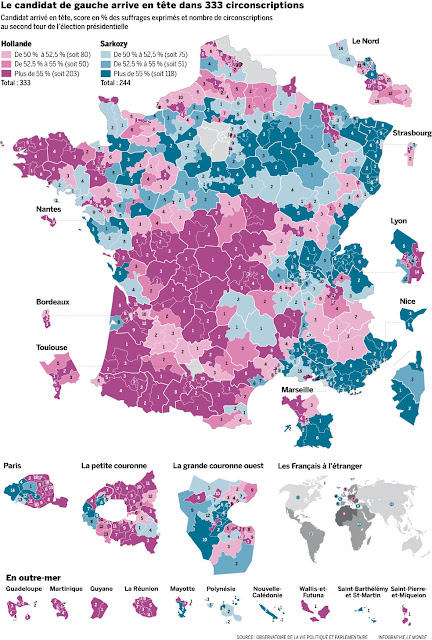 Clearly in intense colors the "safe seats" for each side and in paler hues the battle grounds.  Hollande's coalition should win a majority.  It starts well, with almost twice as many safe seats as his opposition.  However not all is hopeless for the opposition because the socialist have more battle ground seats and those tend to have less FN presence, thus increasing the chances for the UMP to make a few upsets (in particular in the West).

In this second map there is how Le Pen and her Front National could screw up the chances of the UMP to make a decent electoral showing, in accordance to its vote share. Note: this map is based on the results of April first round, so the "predictions" or red dots and blue dots do not always match those of the preceding map. 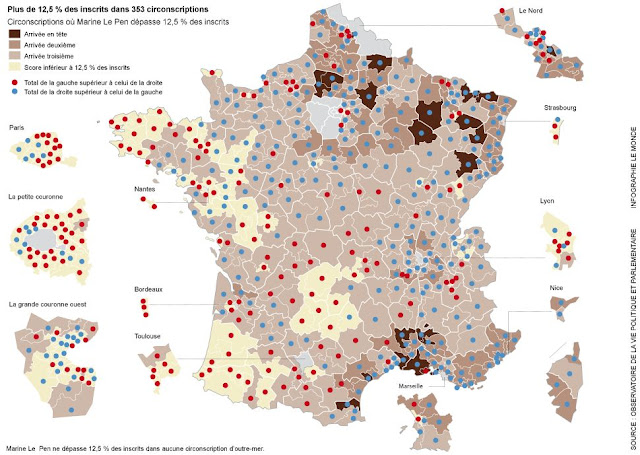 In short: where the right is in deep blue, that is also where Le Pen tends to be strong and in case of no electoral deal for the second round, those safe seats could evaporate real fast and allow for a socialist undeserved landslide.  The French electoral law allows for any candidate who pulled more than 12.5% of registered voters to run in the second run ballot (unless one of them gets already 50% in the first round).  In historical practice it has happened that up to 4 candidates manage that feat, though it is rare.  But three ways may happen in quite a few districts though in general one of them withdraws to favor a given coalition (electoral bargaining is notably hard in between two electoral round sin France).  The National Front could manage to place someone in almost 10% of the districts based on the presidential vote (though in legisaltive vote people are more pragmatic and the FN barely manages to make half of what it made in presidential votes).  That is, to be the wanna-be troublemaker, Marine Le Pen crowd needs to get at least a 10% of registered voters (13% cast votes?).

Plenty of other paeprs and magazines have their chart systems.

In the map before last on the bottom left you can see a world map.  This year French people residing overseas are allowed for the first time to elect their own representative.  In Latin america we get one seat, from the Rio Grande to Patagonia.