Before I am accused of being once again misleading, there is no good news in Venezuela, even if Diosdado were to be taken in chains today a la Noriega. The country is far too advanced in its decomposition for such an event to be positive on the spot. Witness of that are those people that still manage to bemoan that it is a mistake, that bothering Diosdado with such "attacks" only strengthen chavismo just when finally, just now, really, this time is the one, no kidding, we were going to win elections and reverse the whole thing. It is not that some people never learn, it is that they do not want to learn...


The thing is that this week confirmed that the tectonics of Venezuelan politics have been changing no matter what those in charge have been pretending. What has been a status quo of sorts since the eternal reelection referendum of 2009 is finally moving and we may finally be entering into the post Chavez era. For better or for worse, mind you. (1)

Inside the opposition the parties that chose the "accommodation" ways with chavismo have been weakened. the primaries of last Sunday have established that the dynamic opposition voter, the motivated one, the one that the opposition needs to rely on to win any election are now on the side of the political parties that want a more confrontational approach, that call the regime and outright dictatorship and want to deal with it as such.

If we refer to the electoral analysis of Eugenio Martinez (2) we get the following table (note: only some districts went to primaries and primaries always have low turnouts). 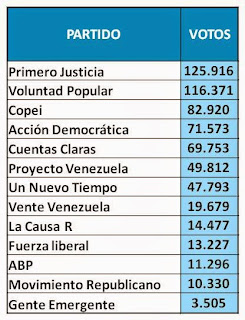 The main parties that want a more direct confrontation are Voluntad Popular, Cuentas Claras, Vente Venezuela, and ABP. Their total is roughly 217. The "dialogue" group of Primero Justicia, Accion Democratica and Un Nuevo Tiempo get 246. Copei and PV going either way according to circumstances, but likely toward confrontation (my attributions, of course).

In short, the protests of early 2014 and the repression that followed have had an impact and the staus quo parties have lost their hold. Capriles of PJ for one seems to have understood that clearly and looks like recovering some gut over the Cabello affair. And the regime is so afraid of Capriles becoming gutsy again that they promptly announced that they would sue him over "unfounded" accusations.

At any rate, for better of for worse, the hard opposition is now led by VP and the more "moderate" one by PJ. Though the trend is clearly toward a more confrontational approach.

This is neither good news or bad news for the regime as a much worse confrontation is in store within.

The Diosdado affair is a big problem for chavismo. Not that it is an ethical matter, chavismo is too far gone on corruption and drug trafficking and repression and violence to care anymore at this point. It is a matter of Maduro or Cabello.  One of them is too many. Maduro cannot defend Cabello for too long. But Cabello is still too strong to go away peacefully in the sunset. Cabello needs to cleanse his name if he wants to become sole ruler of Venezuela but even his closest allies may wonder about how good for them that may truly be. I am quite certain that a few of the close allies that until a few days ago still thought they could weather the ill winds under Cabello's protection have second thoughts now. Bargain chips are sought.

1) Since Chavez reelection of 2006 the country has been under the false impression that Chavez was basically invincible even though the constitutional reform of referendum of 2007 was lost. As such chavismo shut down its internal divisions at the cost of becoming a narco corrupt system while the opposition played a game of survival pretending that there was still a democracy in Venezuela. The death of Chavez did not change that structure except that the those disagreeing with it inside each side became more vocal inside.

2) Remember, VN&V is not doing its own analysis this time around and thus will have to rely on other numbers to emit opinions for which it cannot be held accountable.
Posted by Daniel at 11:34 AM