The Venezuelan Narco State is getting an international definition

The Wall Street Journal published yesterday the first comprehensive account on the multiple investigations in the USA on Venezuela's drug traffic links, and possible long term consequences of those. In Spanish here for free for those who do not have subscription in English. Short English Reuters note here. (1)

Of course there is nothing new here for those who have been following closely Venezuela here. Already ABC in Spain has run into trouble for accusing Diosdado Cabello to be the head of the main drug cartel of Venezuela. What is noteworthy in the WSJ work of Cordoba and Forero is the compilation nature of the thing, of not unnecessarily stressing the role of Cabello. The implications are frightening: the tentacles of drug trafficking that Chavez allowed go much, much deeper than what anyone may suspect, even today.

Because let us all be clear about one thing: this has happened because Hugo Chavez, the hero of the left, has allowed for it to happen, has encouraged it to happen. Diosdado did not come out of thin air. That maybe he became too strong for Chavez to control is another story, but Diosdado Cabello is a Chavez creation, just one of the cogs in the drug machinery that Chavez set up to help the FARC against Uribe. And the cogs are many, including noteworthy high ranking pieces like current Aragua state governor.

But what is the most worrisome line in the whole piece is the quotation from someone who knows Cabello from afar. Julio Rodriguez, a retired Colonel who was Cabello classmate or something, qualifies him as a "kamikaze", "someone who will never surrender".  In other words, Diosdado Cabello will take down with him as many as he needs to take down. He will take the country down with him if he needs to.

Thus, even if the primary elections results of yesterday were a very positive sign for the opposition, even if chavismo sent out its loud mouth pieces to vilely trash them the best they could, that is not the issue. The issue is the nature of the beast true civilians in Venezuela are facing.

At least we can take some solace in the comfort that after ABC in Spain, the WSJ piece of yesterday (front page today) will not allow for international public opinion to look the other way anymore. Diosdado Cabello may be able to close the last information outlets in Venezuela but that will only confirm what these newspapers have been writing and making public. Venezuela IS the NEWEST NARCO STATE and as such Venezuela is now a major problem for the west, just as northern Mexico is, just as Colombia was. Just keep in mind what the drug war of Northern Mexico is costing, what Uribe and the US had to spend to control Colombia and you will know what will have to be done about Venezuela if international pressure does not grow faster. In particular from the rest of Latin America which are going to be the first victims, by the way. But possibly drug traffic money is also reaching there deeper than what we may already suspect.

PS: the strangle hold on remaining "free" Venezuelan media can be seen on Google news which has become nearly useless. With all the state media supplemented with allied stuff like Cuba's Prensa Latina, the Google page on Venezuela is crowded with favorable news for the regime and one needs to scratch hard to find more critical coverage unless foreign newspapers make headlines out of Venezuelan news.  Well, today it is such a day where regime sponsored media cannot overcome bad press as seen out of this screen shot at 1 PM Europe time. 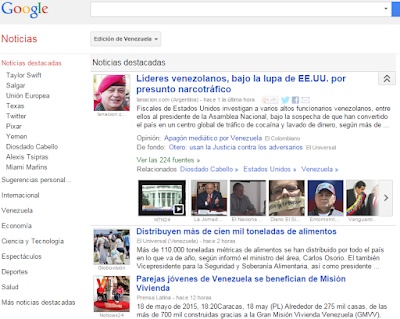 In spite of all regime set ups, the investigations on Diosdado is number one main news leaving in second propaganda "news" on food distribution (100,000 tons, yeah , right) and how young couples benefit from new housing (yeah, right, as long as they have the right red connections).

1) Is it necessary to remind readers that investigations on crime in the US are independent from the executive branch as there is separation of powers and that the intervention of this last one is reserved strictly on actions that may be taken according to national interests?
Posted by Daniel at 10:00 AM