Salvaging the Recall Election in Venezuela
A Special Report from Guama

Guama is a small village West of San Felipe. If during our XIX century civil wars it had a rather violent past with the battle of Guama on September 21 1870, it has become a sleepy and pleasant village of a few thousand people, playing a rather artistic role in Yaracuy with its famous Saman towering and providing shade to one of its square, a favorite target of many a painter. Certainly one of the most handsome villages of Yaracuy, at the foot or the Sierra de Aroa.

But this bucolic image hides a rather perturbed present.

I did contact an opposition member helping in the coordination of the validation effort in the area, and off I went to visit. It was worth the trip to see how the struggle for the Recall Election plays everywhere, from Caracas to rather remote areas, with the same will. I was told of the local mayor, Ramon "Monche" Liscano, a Chavez supporter exerting outmost pressure on public employees and their relatives to have them withdraw their name. The pressure has been rather effective and Guama reports so far the highest percentage of people withdrawing their name from the Recall Election petition. The mayor gets away with it since Guama has a limited source of jobs, a few in the agricultural and commerce sectors, more jobs commuting to San Felipe, leaving town hall as the largest employer. In a depressed area, no matter how bucolic, a minimal wage is hard to give up.

This is actually tearing apart the community. As a long established village, pretty much anyone in Guama is the godson of the cousin from the aunt of the sister in law of the youngest brother of so and so. It looks like Guama has resented very much the division introduced by the pro-Chavez mayor and this one has a near zero chance of reelection next September. I did confirm this, by the way, from next door San Pablo people I do know. From San Pablo I was also told that Guama is a rather religious community and certainly Chavez attacks on the Catholic Church have not helped the Mayor.

The opposition thus set up shop. This first image is the "meeting room", tabulating results. A simple adobe like structure, ventilation through open blocks instead of windows. You can see the kitchen table meeting, on a plastified table cloth, old metal chairs, a couple of cellular phones, under a RR poster, (Referendum Revocatorio or recall election). This is what has Chavez so scared, for all his armies, dollars and tricks. The people, humble people, organizing themselves, with pen and paper to collect signatures against his rule. 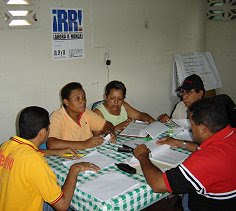 This next picture was another meeting in a hallway, people looking through the lists to try to figure out who lives where, has not validated yet, and to contact them to offer help to go and validate their signature. 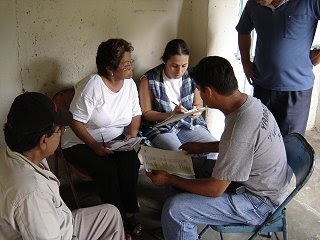 While I was there I was introduced to the representatives of three different political parties that were bringing in reports. One of them announced a threat by some soldiers of house search against someone in Guama that happened to have a computer and Internet at home!!! A computer seems a threat in Guama!!! A volunteer lawyer was promptly dispatched. It was quite something to see people from all local walks of life so united and determined. 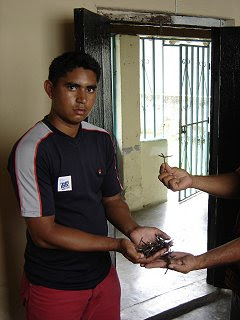 All in all a rather inspiring moment. An emotional hard struggle for these people. Perhaps they have been spared, so far, direct violence as in big cities, but it was very sad to see that their quiet world had changed in the last 3 years. I saw a determination that I did not know existed in Yaracuy, and I was very proud of having met them and having gained enough of their trust to be told the tale, and allowed to take the pictures.

And of course this way I fulfill my promise to show the readers of this blog something that will never make it to CNN :-)