OMENS IN VENEZUELA?
Maria Lionza breaks her back

The racial origins of Venezuela go a long way in explaining why we are such a superstitious country, a country so open to spiritual influences from all type. Thinly settled by native Americans that were hard to subjugate, late to be colonized by the Spaniards who were more interested by the gold found elsewhere, a rather significant input from slavery, many slaves able to escape to the Venezuelan wilderness and mix with the natives, probably allowed to the persistence of many local spiritual practices that the Church and the Spaniard master could control better elsewhere. Thus, like Brazil, Venezuela has a most vigorous santeria/voodoo/cadomble cult.

By far the main cult in Venezuela is the one of Maria Lionza, "La Reina" (a blue eyed Native princess) who forms a holy trinity with Negro Felipe (the African American element, a maroon slave) and Guaicaipuro (a famous native chief who resisted for a while in the Caracas area). Though this trinity can be quite increased in numbers according to local variations. It is basically a syncretic cult that represented the suffering of the lower social classes through Venezuelan history. Hence its success and persistence.

It is difficult to quantify its followers, a task made even more difficult since you can be a Roman Catholic on Sundays and have an altar to La Reina at home. But the proliferation of shops selling Maria Lionza paraphernalia with all sorts of potions are a sure indicator that we are talking of several millions. Whatever the numbers, even the non-believers are very familiar with Maria Lionza, if anything by her imposing statue smack in the middle of a busy Caracas highway. There in the buff she rides a danta, our local tapir variation [1]. Certainly a very natural image for the goddess that protects the water, plants and animals. 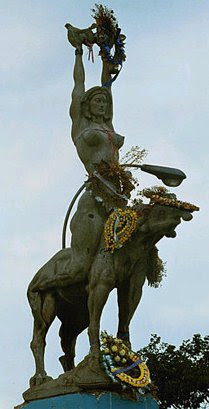 Followers brave constantly the perilous crossing of the highway to cover with floral offerings their deity, and that image is now iconic in Venezuela [2]. But if the statue of Maria Lionza has mystic appeal, it is still not of very great artistic value, IMO. And since it has been placed there in the early 50ies, it has not been taken care of, damage increasingly visible. Certainly the steel and concrete nature of the statue, subjected to the acid rain of traffic has not helped. On Sunday morning the statue, undergoing a spectacular restoration legal battle, collapsed. And on the eve of the chavista march of Caracas, 3 days after Chavez acknowledged that he must face a Recall Election. 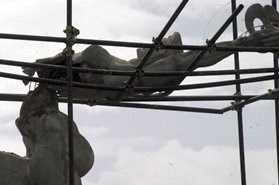 The omen of the fall of Maria Lionza were clear to all of us, even to non believers. It has been a constant observation that chavismo includes a very large amount of Maria Lionza followers. Actually credible explanations on some actions of the regimes based on the predictions of the babalaos ("priests" of Maria Lionza) have been advanced: dates, symbol choices, choice of words... Chavez religious ambiguity has helped further these interpretations. Certainly, good indirect evidence has been the ongoing legal battle where the government is trying to move Maria Lionza to a rather unsuitable site, without any satisfying reason advanced. Suspicious minds of course assume that there is "promesa" to be paid by a high official, a vow made to La Reina (to reach office?)

Yaracuy is the accidental seat of the Maria Lionza sanctuary. It is the beautiful mountain of Sorte, not even half an hour from San Felipe. The orientation of the mountain to the trade winds makes it always receive some rain even in the middle of the dry season. Probably this almost permanence of water gave it a sacred character to the original inhabitant of the area. Even if it is not particularly high Sorte sits on a fertile plain that enhances its aspect vis-à-vis its local mountainous neighbors.

Every year during the October 12 long holiday the area swarms with people that come to practice the cult. No sanctuary or temples. People seek the streams flowing from the mountain, the pools that form naturally and under the jungle canopy perform all sorts of rituals that are best left undescribed.

But Yaracuy, to my surprise when I moved to the area, is not very fond of Maria Lionza. Actually for some it is rather an embarrassment for Yaracuy to host her cult. And the tourism it brings is not very welcome except by the local administration who sees the money it brings in. Perhaps we are aware that the danta is now extinct in our state even though the danta is our state animal and thus if Maria Lionza cannot even protect her animal in her own state...

Still, the streets were abuzz: all of Yaracuy knows that the break of Maria Lionza is a bad omen for Chavez.

And they are not the only one. Some TV talk shows do bring astrologers and other fortune tellers to give their version. A mission of babalaos is on its way to Sorte. Numerologists are having a field day since Maria Lionza broke on 6/6/2004, and 2 + 4 = 6. Some even remembered that the equestrian statue of Bolivar in Chacao broke in 1998 and a few months later the rising political career of Irene Saez, the Chacao mayor, came to an end in the hands of Chavez.

2- Maria Lionza statue was already surrounded by a armature to allow previous restoration work until the legal battle decided of its final location (picture). Probably one late night disciple climbing recklessly to the top to put its floral offering was too much weight and it snapped. Fortunately the armature held the torso that otherwise would have hit the pavement and probably break into pieces making the statue irrecoverable. Incidentally the statue was used during a recent march of the opposition when a banner was attached to it asking La Reina to take Chavez away (picture). Have they been heard? The answer anytime soon.