Recall Election in Venezuela: the celebration in Yaracuy
A picture description of a small state political march, as not seen on CNN (or even Globovision)

Caracas opposition march did take place yesterday, quite successfully in spite of the rain. Today it was the turn of the provinces to have their time under the sun, were it to show up. Yaracuy under Governor Lapi (Convergencia), one of the main characters of the opposition, in particular since he participated in the negotiation table of the first half of 2003, demonstrated once again his appeal in the state. His party, Convergencia, controls only this state after having been in power just before Chavez. But Lapi has kept it more than alive in Yaracuy to the great displeasure of Chavez.

The march was called at 10 AM, at "la Concha Acustica" all the way up in San Felipe. The sun is harsh at noon, the idea was to walk downhill and be done for lunch time. I have selected a few pictures, hopefully small enough to avoid a heavy page. Some pictures are just a link for those wanting to look further.

The first picture is the atmosphere while waiting for the start. The truck carrying the media, and the signs from at least three political parties mixing together. A group of people waving a huge Yaracuy Flag.

In the depth of the Convergencia contingent.

This picture shows clearly the white bourgeoisie of Yaracuy that opposes Chavez. 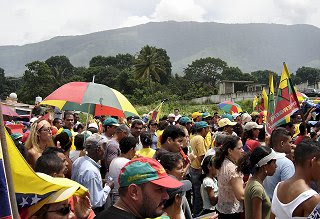 Going down Avenida Ravell. You might notice a lot of umbrellas through the pictures, they were not for rain but for sun protection, a common practice in Yaracuy.

Along the way, a family from Convergencia! 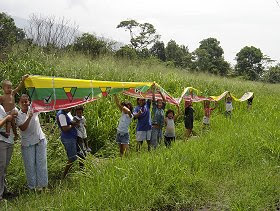 Along the Avenida Cedeno 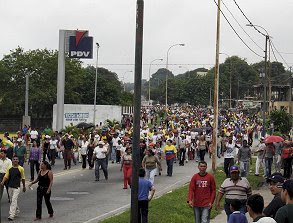 Two old ladies prefer to watch from home, but their heart is clearly with the marchers. 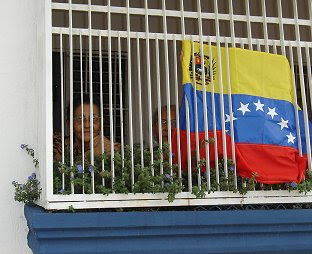 One nice thing about small town political rallies is that you can manage to get close from the action if you are daring enough. I did manage to climb half way to the podium at the end point and take this picture from the rally. I even could take pictures of the Governor doing his speech! Well, one of them taken by his body guard... 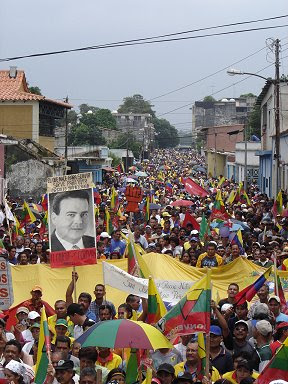 A view toward the podium from about 2 blocks, observe the ever present aerial cables in every Venezuelan town

The Governor working the crowd (the only pic I did not take). You can notice the large umbrella protecting the press stand. By the way, the press was posted at all critical points during the march, local TV must have had real good images tonight. The Governor at his podium, from below and the activity around the Governor during his speech, one reason why I could not get any higher. After all, I am just a blogger :-)

I hope you have enjoyed. I had a great time myself and came back quite energized, if exhausted by the sun and the heat. I have not even checked out how were the marches elsewhere, but San Felipe had a very good show considering that we are only a 150 000 people area.