A picture is worth a thousand words

I could not resist making this picture montage. One from El Nacional, one from Tal Cual via Globovision and the last one from Union Radio.

The picture on the front page of El Nacional raises quite a few questions. On that picture you can see as Otoniel Guevara, just arrested as a suspect in the many facets of the Anderson affair, is taken into custody. 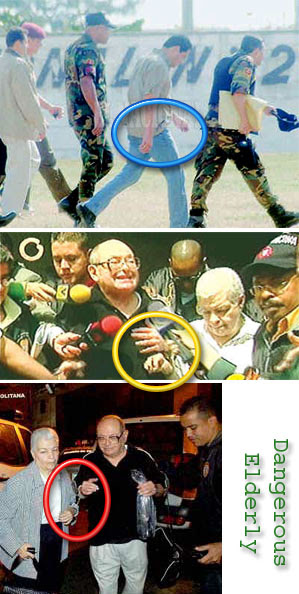 Two days earlier the parents of Lopez Castillo were taken into custody themselves. Two elderly people, handcuffed to each other. A very visible security threat. Even though the old lady is allowed to keep her hand bag (where a small grenade could well be hidden) and the elderly gentleman is carrying a bottle (that could well be a Molotov coktail).

Now, why such a different treatment? These two people had just lost their only child a few hours before (note that they still manage to wear dark clothing). The above one used to be a "colleague" in the security forces of Venezuela.

So Jesse? Any logical explanation?