I am officially on vacation until January though of course management has to work a few days during vacation. At least it will be work at home, or at the closed office, in shorts and sandals (without any sandalista around, mind you!)

No Christmas spirit this year again. The third in a row. I think people are starting to get used to it. Only one apartment in my building did put some lights out. A little plastic tree in the hall way and that is all. The blessing is that with the lack of enthusiasm, and money, the usual petards exploding at any time of day, or night, have decreased to almost nothing, at least in San Felipe.

As usual the country is pretty much shutting down except for food stores and present stores. These last ones will be closed by the 24 at noon and the country will be lethargic until the second week of January. Only resort areas will show some activity, perhaps as much as usual due to the fact that less people can afford to travel overseas for the holiday. But less people can afford to travel too. So local tourism has not improved much.

Still, people are organizing their family gathering, a few toys are been bought, some discrete decorations are finally appearing. This cartoon of Weil expresses quite well the prevalent mood. With the repressive laws voted, or about to be voted, it is quite clear that next year things will be different. A few do celebrate Christmas. Perhaps some chavistas that did hit the jackpot and do not realize that they will eventually be affected. Perhaps a few NiNi of early this year that are unaware of reality. But I can assure you that most people from the opposition that I know and who are cognizant are limiting themselves to a family gathering with little extravaganza. They are not on that boat, even if part of society might be embarked on it. 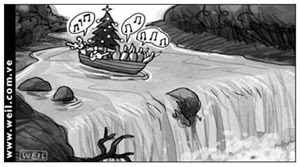 As for myself, in a few days I will be leaving for Caracas. There in between family obligations I will concentrate on a backlog of books to read. Thus I expect less blogging as of the middle of next week, not to mention that politically I think that not much will happen. Chavistas have grabbed everything and I suppose that now they will rest. I do have a few things to get out before I leave. Thus you can keep visiting until you go off on holiday yourselves.