A welcome letter to the participants of the group saving us

I am writing to you who are gathered in this august assembly in the Teresa Carreño. The Encounter Between Artists and Intellectuals has been receiving a mild coverage in the press, if not a sarcastic one, but this is probably due to the fact that they have not realized that you were invited by more than the Cuban government. These insensitive weirdoes should remember that poor Fidel is sick, and probably sick of having to receive you regularly in Varadero, amen of catering to you: jineteras are there for dollar paying tourists! No! Fortunately El Supremo the other night set the record straight by saying that it was a CUBANOvenezuelan initiative.

You were all with him that night, gawking at the new anti US knight in fashionable suit, when he announced that you were all in cadena. And you all cheered in triumph as El Supremo announced that you were in Cadena. Not your first time in Venezuela, isn’t it? You have learned about our little Supremo media practices, practices that Eva or Ignacio would not tolerate a single second from their local supremitos. I mention these guests since Chavez called on them during the cadena, I mean, his welcome speech.

This was quite a cadena, was it not? He told you all about his recent vacation visiting all of his pals. Some are not too happy and got quite a hangover. Moratinos comes to mind. Other did not get a hangover but then again their religion forbids them to drink. Unfortunately the format of the speech did not allow for pictures of his vacation. Do not worry, here you have the pics of Chavez with some of his friends, all known people lovers, humanity saviors (well, at least they are known for saving their own humanity, that must count for something). 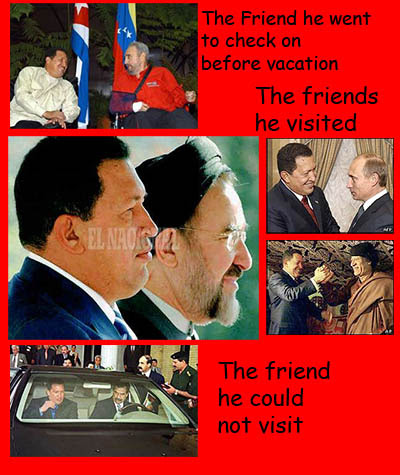 No prize for naming all of his friends.


How long was the cadena? I do not know, I bailed out before the end. After all, you know, I have heard what he says hundreds of time now. It is always the same speech, all about ME! The Victim! But I did hear that Chavez wanted you to work hard and have a good time. He was very worried by you producing a significant document to crown this hallowed reunion. But considering the season I am sure that you will write something worthy of the remains of a Christmas bazaar.

The other thing he was worried about is you having a good time. I will help my president here! I like our guests to have a good time. Unfortunately the beaches of Vargas are still a mess 5 years after the wash out. Varadero it ain’t… but worry not, I have a list of alternate activities.

For the serious minded ones around you, you need only walk within a mile of the Teresa Carreño to see a perfect inventory of all of Human Misery that you are here to rescue us from. Street kids, pushers, prostitutes, thieves, peddlers all inhabit this “post-nuclear” landscape that Caracas has become, according to Ms. Socorro. But Chavez in his magnanimity has allowed Bernal to be re-elected mayor so he will have a chance to demonstrate that things can be kept as you see them, like a reference point for progress elsewhere, a museum of sorts of the effects of neo-liberalism.

For those that want to have fun and travel I can suggest our own version of “Where is Waldo?”: “where is Silvino?”. If we are to believe El Supremo underlings, his buddies disguised as security forces took him away over a month ago for some real partying. No one has heard from him since. Now, that is a heck of a hangover! Though he called from Valencia his sister, or so she thinks. But nothing else. Thus as you visit our beautiful country look around! Fun!

If you come to my home state of Yaracuy do not miss the Sorte mountain and the cult of Maria Lionza. There among other magical activities you can probably practice spiritism and calling the dead. You might find there our state prosecutors and top detectives trying to call the people shot in the Anderson investigation before they had a chance to declare. Worry not, this is a practice that existed before Chavez came to power, shoot suspects first, interrogate after. You know how El Supremo respects traditions, in particular when convenient to him.

And of course you can visit one of numerous cyber cafés where you can write your loved ones at home. Soon these will be hotbeds of information as the "gag law" will limit real time transmissions of news. Next time you come you might not see that café again. While writing your squeeze sweet nothings, you can also vote to nominate El Surpremo to the Nobel Peace Prize. A given considering all the peace he has brought to Venezuela.

All in all have a good stay. Just stay clear from the Colombian border, from the mountains around Barquisimeto, in the streets after sunset, away from Maracaibo lake (unless you plan to go to the Delaware River area which is full of Venezuelan oil). Well, now that I think of it, you are better off staying in your hotel unless a native ferries you around. Trust me on that one.