Winds of change in Yaracuy

This title could have sounded optimistic considering that now Yaracuy will have a new governor. But with barely a month in office, I am not too optimistic. Indeed some changes are taking place.

The glorious revolution has arrived

In spite of claims of bankruptcy, mismanagement, deficient services (standard in Venezuela when we change administration but nobody ever goes to jail) funds have been found to put yesterday this glorious and expensive poster. First things first! 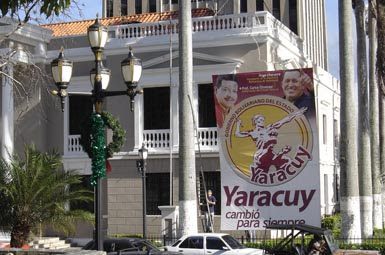 Thus when you visit the State Capitol you will know without the shade of a doubt that Yaracuy has now a "bolivarian" government and that the one in charge is Chavez via HIS governor. Note that the colors used are the ones of PODEMOS; technically the governors party instead of the flaming red of Chavez party. This red is already found in all the T-shirts of public employees of the highway that crosses Carabobo. There, within a few days of Acosta Carles taking office, all the T-shirts of the employees went from yellow to the brightest of reds with a logo of "gobierno bolivariano de Carabobo". Toll stations are now colorful.

I wonder how long will Gimenez be allowed to keep his colors. I worry for him.

The company they keep

This little advertisement appeared early this week in El Yaracuyano, one of the two local papers. In it you can read that the insurance cooperative (¿?) UNO is opening an agency in San Felipe. Just in time for the new administration?

Now, there is nothing wrong with a new insurance option in Yaracuy, the good Lord knows that we need all the insurance we can get in Venezuela! But strangely it comes as a cooperative organization which is one of the battle horse of the "new solidarity economy", or some other PC expression. I can see cooperatives for milk producers, coffee growers or school supplies. But insurance? Does not that require some significant capital?

However the reader could say that this blogger is overly critical and skeptic. So I will retort that the real problem in the picture is the director shown on the right and photo shop enhanced: ex banker Orlando Castro, who acquired quite a reputation during the banking collapse that Venezuela experienced in the first half of the 90ies. You can make a google search for the man figuring in this picture and you will not be disappointed.

Interestingly Mr. Castro came back from "exile" once chavismo was solidly in place and has joined the revolution. As did other luminaries of the financial past who now are making a social come back as seen in the social sections of newspapers recounting the parties thrown by members of the new revolutionary elite.