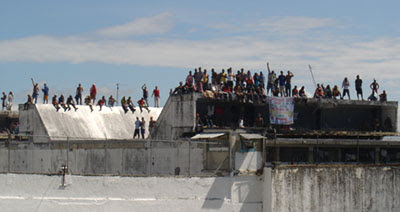 In a country who is now plagued by so many shameful social problems, the situation of the prison system is a particularly painful matter, a human rights calamity. After almost 6 years in office (February 2) the Chavez administration not only has not dealt with the most degrading human right abuse that our incarceration system is, but, as a matter of fact, has made it worse.

The picture above was taken by yours truly in San Felipe this morning, around 10 AM. The people you see on the roof, who look miserable enough (I can send the full pictures for those who care for more detail), are part of the prisoners of the San Felipe jail who are on hunger strike (and I presume managed to take control of a section of the prison allowing them to spend their time on the roof). Their main wish? That the judicial system shakes its butt and either condemn them once and for all or free them. In addition of course to all sorts of valid complaints which, if not met, will result in an aggravation of the strike. Perhaps they might end up in a "blood strike" where prisoners among other activities injury themselves to force their evacuation to hospitals.

And this is going on in about 15 of the Venezuelan detention centers (it started yesterday in San Felipe). The very same type of scenes of occupied roof tops is seen in all jails, while all sorts of anguished relatives hang out in areas where they can have a view of their jailed dear ones. Even if you think that most of these people deserve perhaps worse than what they get, you cannot fail to feel anguished in turn when you look at the deep human misery on display.

Why this situation? Solving it does not yield votes to the Chavez administration even if supposedly most of these people comes from the natural constituency of the regime: the lower classes. In all fairness the regime inherited that attitude from the preceding ones. But unfortunately for Chavez, his tinkering of the judicial system had made it much, much worse, creating jails of abject squalor where in the XXI century people die of typhus. Even if not in the books, the death penalty exists in Venezuela: 5 years in jail usually take care of that, even if you did not get your trial yet.

And it is going to get worse. The military nature of the regime is certainly not going to bother about the nature of jails: no military regime EVER had a decent prison system. You need evidence? Look at the recent decision of the Supreme Court (TSJ). It concerns a case in Bolivar State ("Vista Hermosa") where apparently 4 Nazional Guards were in cahoots with 3 wardens and killed a whole bunch of inmates in a local jail on more than suspicious conditions. The pile of bloody bodies made the front pages. Well, due to "procedural matters" the 4 Nazional Guards have been released so as to go on trial as free citizens while the wardens will remain in jail during the trial.

The reader will agree that no further comment is needed.