Tal Cual editorial today gives the numbers of public housing built by the last three administrations in Venezuela (1). The simplicity of the figures deserve an illustrative table. To the number of lodgings built in total and yearly, I have added the major problems faced by each administration, as well as any political advantage that they might have benefited during their tenure.

The numbers are eloquent by themselves. Just as the 1999 Vargas disaster was followed by inefficiency and corruption, so is the public works program and, more essential, the public housing programs mired in at least inefficiency.

Interestingly chavismo does not even pretend to deny these numbers and instead launches in a campaign to make believe that housing is sprouting everywhere. The latest show was actually Chavez in Yaracuy yesterday doing his "Alo Presidente" Sunday talk show. This picture from the Bolivarian News Agency shows Chavez and the new Yaracuy governor Gimenez supposedly inaugurating just made buildings in Cocorote where, we were told, some of the refugees of Vargas 2 will find solace. 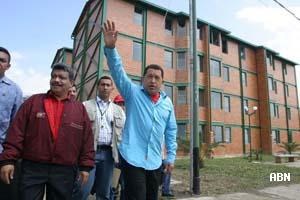 Well, it is all at least a semi lie. The pair of buildings have actually been built since the middle of last year, AND NOT even in the district, Independencia, of Gimenez, now the governor of Yaracuy. But that does not stop this one from taking all the credit and put hound-like the glory at the feet of his boss. How do I know that? Well, I drive in front of them occasionally. I was actually wondering if I could buy an apartment myself there but was told that all was "reserved".

And after that how can I believe that the government will build 200 000 homes in the next couple of years?

Added later. Miguel did translate this editorial.
Posted by Daniel at 2:58 AM