The dehumanization of the opponent in Venezuela

One characteristic of fascistocomunistotalitarian regimes is to remove the human nature of whomever opposes them. This can be done in different ways, from amalgamating opponents in a simple group that all can hate ("the jews!", "the commies!", "the fascists!", "the XYZ!") to simply denying the existence, the relevance, the basic rights of the individual. If we cannot say yet that chavismo is doing this in a large scale we can already observe that the readiness to do such discrimination exists in its followers. I am not talking here of the Tascon list, a flagrant example of the apartheid mentality that already exists in some chavistas. But I am talking about how the desire to obviate people that do not agree with you already exists in the underlings of the regime. This is not a polite way of "ignoring" someone pretending that one did not see that person arriving. No, we are talking at the deliberate strategy to make folks non-entities. Let's examine an example.

The ABN was founded by the government a few months ago with the objective of projecting "real news" on Venezuela. On occasion I scan it. Today their picture of the day section give us quite a story. I have saved a snapshot of today's offering below. 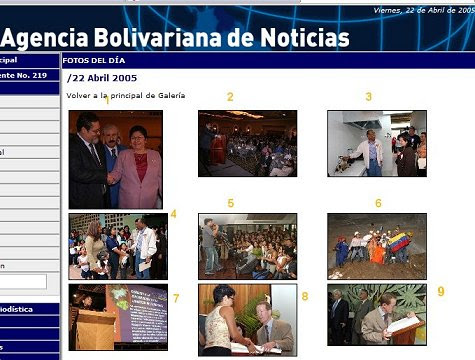 This might not seem much, but when you click on the different pictures, the legend tells us quite a tale. (The golden letters were added my photo editor, otherwise the rest comes from the 'print screen function').

The big news, so to speak, was the apparition of Caracas Mayor at Large at an event sponsored by FEDECAMARAS, the private business association of Venezuela, ill advisedly involved in the April 2002 events. Well, water has run under the bridge and FEDECAMARAS as well as the Venezuelan government are calling a truth of sorts, to try to make some business deals. But in the legends we only see the name of the mayor, Barreto, and not the one of Albis Muñoz, the lady in pink and the president of FEDECAMARAS, the hostess of the event.

The US embassy has sponsored for Earth Day a few activities to try to promote a rapprochement between the two countries. But the name of the ambassador, William Brownfield, does not appear in any of the two legends, and yet he is at the center of both pictures. We only read "La Embajada de los Estados Unidos".

The names of public officials that appear in 3, 4 and 7 is spelt correctly in the legend.

Now, this is too much of a coincidence, I think. A little Granma in the making?
Posted by Daniel at 4:09 AM