From Venezuela: protest at the US embassy and folklore

I am not sure what an impact Chavez had yesterday with his threats to break up relations with the US. But in Venezuela it was a bust.

So far, opposition personalities have announced in unison that this was just a maneuver of Chavez to distract from PDVSA and the mounting domestic problems. In other words, the opposition will not be dragged into an artificial fight that only benefits Chavez, and certainly not Venezuela. Liliana Hernandez of Primero Justicia even said something like that: "Please, president Bush, send Posada Carriles to Chavez! We want to talk about real issues, here, about the missing money of PDVSA, about X, Y, Z. Let's get over with the Posada show!"

Meanwhile, as expected, the knee jerk chavista machine organized a protest in front of the US embassy. The same usual scenario, a few hundred people with amazingly fast made consigns, reflecting exactly what the beloved leader said a few hours ago. But the US embassy has seen much worse elsewhere and it was not going to be browbeaten that fast. The second in command of the embassy surprised every one by coming out real quick and defuse very amiably the situation. Actually, I am not sure that Chavez is going to be very pleased at how easy Mr. McFarlan got in good terms with the protest delegation he sent over... 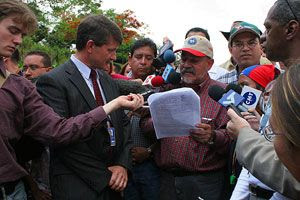 The ABN was rather subdued in its coverage at 1 PM, no big crowds to show?

This still should not distract from the gravity of the situation for the US. After all, Posada Carriles has terrorist links that are not to be doubted, as well as CIA links, even if he is a leftover of the Cold War. It would be really bad that the US hands to Chavez an issue that it could win very easily if it uses some lightfooted diplomacy. Looks like Ms. Rice has her first serious challenge there. She will get some help from Chavez though: apparently yesterday he said a few things that are completely out of the extradition protocol that already exists between Venezuela and the US. He probably will end up messing the issue so much that the US might walk away waltzing. Unless of course Castro takes matters in hand....

At any rate, the US will be well advised that the bragadoccio of Chavez yesterday is also a mark of his weakness, of an administration that is again in deep crisis and that this time finds no one at home to blame for its incompetence. Heady days ahead?
Posted by Daniel at 8:05 PM