I have been away for a full week but now I am back. The little slack experienced in this blog did not perturb the good march of my Internet colleagues as one of them, Gustavo Coronel, reached a little bit of well deserved fame. All, of course, as his predictions of a collapsing PDVSA is finally happening, and even picked up by major media outlets. Then again Gustavo, not foreign to this blog, is not quite a blogger: let's call him an oil expert that dabbles in Internet journalism, and with great success lately.

The good news for me as getting back home rather tired is that I need not to write much, all has been covered and even translated. I just need to organize it "my way" as Blue Eyes.

It all started in an open letter written a few weeks ago by Gustavo. The rather strong letter is translated here, Spanish first, English later.

That strong letter is cited from the start in last Sunday El Universal. Roberto Giusti, a star reporter in Venezuela, describes without mincing words how PDVSA is collapsing. A translation has been published here. The strong analysis of Giusti leaves no essential stone unturned. The reports of incompetence and corruption in a normal and democratic country would provoke at the very least a major inquiry that would probably result in the fall of the government that presided such mess. But here, in El Supremo realm, he would rather vituperate, make excuses, claim lack of information, lie outrageously, etc, etc... but would certainly not fire the supremely incompetent oil minister cum PDVSA president who obviously is overtaken by the whole thing, refuses to declare to the National Assembly and plays Lego in building PDVSA offices in Havana, when not naming his wife the president of the cultural branch of PDVSA, La Estancia, nepotism not seen in previous PDVSA managements.

Today, El Universal editorial (already translated) examined the contradictions around PDVSA. This as a nice introduction to the description of Chavez Sunday's tirade. Tirade by the way where El Supremo started showing signs of emotional distress. No wonder, he even admitted last Saturday that "pamphlets were circulating in the army barracks". But today's article had a picture of Chavez holding the offending article of Giusti, on the very same day it was published, demonstrating that Chavez reads El Universal, no matter how "golpista" this one is. The picture is wonderful as the name of Gustavo Coronel is barely two inches from the Chavez right hand index. Let's hope that if he touched it, it would not set a curse on Gustavo. 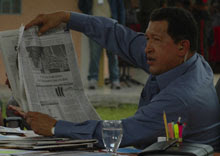 Of course, I must dedicate this post to Gustavo Coronel (who probably appreciates Blue Eyes too), because at the same time it allows me to cover the collapsing PDVSA while discussing a more general theme: the strength of Internet and blogging, even in Venezuela.
Posted by Daniel at 2:06 AM