The Tascon list is the infamous list that was published by assemblyman Luis Tascon, a list that was used to start a McCarthy like system to purge public administration and deny public services to all of those Venezuelan citizens who according to article 72 of the constitution exerted their constitutional right to request a recall election on Hugo Chavez, president of Venezuela, once his midterm was reached.

The Tascon list became a CD and even a program that was ubiquitous in many a ministry and public service such as passport or ID card issuers. People who had the misfortune to have signed the petition faced simple things such as refusal to have a passport issued to graver things such as loss of job if they were public employees, even if they were holding menial jobs certainly not threatening the republic.

The Tascon list was used during the electoral process of 2004 to exert undue pressure over the electors, from blackmailing them in order to have them withdraw their signature and try to invalidate the Recall Election process, to all sorts of civil right attacks, denigrating basic Human Rights. No legal resource would hear the few who dared complain (1).

But times have changed. The charges have been piling up, and the political persecution could not be hidden anymore to the foreign governments who still show some interest for Human Rights in Venezuela.

Deciding that something had to be done, Hugo Chavez, in a show of pretense, decided that the Tascon list should be "buried", knowing fully well that its spread made this declaration only a symbolic one at best. No word from Chavez as of punishing abuses committed, or redress to the victims of the McCarthy prosecution of Venezuelan citizens, the worse moral and ethical violence that Venezuela had experienced since the last dictatorship of Perez Jimenez.

The government has been trying to protect the image of Chavez. The vice president, modern day Goebbels, has been reaching new lows of abjection trying to distract from the issue. This has become so difficult because no apology, no offer of redress have been advanced. No matter how much the attention was diverted to other players such as blaming SUMATE of the list, the attention did not drop. Even the High Court going against Tascon will not stop it.

Today we see now irrefutable evidence that Chavez was linked to the Tascon list elaboration. A letter addressed to Carrasquero, the president at the time of the electoral board, CNE, asks this one to allow Tascon to obtain all the information he wants from the people who signed for the Recall Election. The letter is dated January 31, 2004. (2) 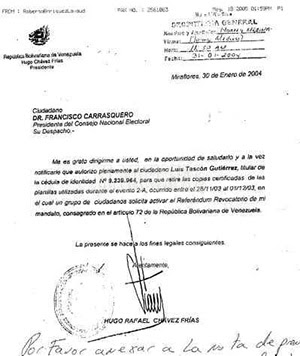 Grado 33 in Globovision has just shown a video from a Chavez Alo Presidente where he says that he asked for such a list to be made. The video is from the February 1, 2004 broadcast (3).

There is no argument possible. Chavez knew of the list. Chavez approved its elaboration.

Even if Chavez did not approve of the political persecution that resulted and keeps claiming that he knew nothing of it, the only way he can demonstrate his good faith is by asking a full inquiry, asking a full punishment to the perpetrators, offer a redress program for the victims. Not doing so will simply establish his complicity, his guilt, and give the Venezuelan people the right to impeach him for violating our Constitutional Civil Rights.

What is international opinion going to do about it? When I see for example that the Spanish socialist party refused to vote a motion to protest the Venezuelan "gag law" I wonder if Franco is casting a dangerous shadow over them. When I see the French embassy in Caracas kowtowing to all sorts of business as if nothing with Venezuela, the Monde Diplomatique rumored to be funded by Chavez, I can only wonder about what kind of Europe Zapatero and Chirac are building. And they want us to vote YES for that Europe?

What will the US do? Isn't that a perfect opportunity to expose Chavez? Will the US Liberals tolerate such actions in Venezuela? Where is the ACLU when we need it?

What will Lula and Kirchner and Lagos do? Do they want to appear innocent bystanders? Will they risk seeming to look for an excuse to do as such in their country someday, setting back Latin American democracy for ever?

There are times when we run out of excuses. This is one of them and people will be judged as to their response to the Tascon list.

1) Miguel Octavio's blog carries many documents on the witch hunt of chavismo against the opposition.

2) the letter shown here is taken from today El Nacional edition. I assume that it is a legitimate document. However the existence of such a letter, be it the one shown here or anther one is acknowledged by Chavez himself in the video. The text reads a request by Chavez that the CNE allows Tascon to obtain certified copies of the signature forms for the Recall Election.

3) look around minute 4 for Chavez recognizing that he signed such letter. There is footage of Tascon shown, and support from Chavez to Tascon then. Obviously Chavez is wise enough not to take full credit and let his underlings with it. But the video is quite clear as to Chavez full support and thus an accomplice. Added next day as video became available on the net.
Posted by Daniel at 4:27 AM