Really, the spectacle given by the government these past few days has revealed, yet once again, how incompetent and disorganized is the Chavez administration. It seems that it is unable to do anything right. The cases that bring this reflection is the Posada Carriles case and how this one is used to try to distract attention of the PDVSA debacle.

This is not a silly phrase, in fact it is the direct question that the US should ask Chavez as this one dares to defy the US demanding, DEMANDING, that Posada Carriles is returned to Venezuela.

I do happen to think that a terrorist is a terrorist and no matter where the crime is committed, the said terrorist should be condemned where the more heinous crimes were perpetrated. That is, Osama should be judged in the US and Posada in Venezuela or Cuba. However other countries that have suffered the attacks of the terrorists do have a regard as where an effective trial should be held. The US should protest if Iran were to try Osama. And Venezuela should protest if Posada were to be tried in Panama.

Because this is the basic contradiction of the Chavez administration. When Posada Carriles was arrested in Panama in 2000 for setting up an assassination attempt against Castro, Venezuela waited for the longest of time to ask for its extradition. Actually it seems that Castro had to complain more than once until Venezuela finally moved its butt and requested extradition. The then Panama president, Mireya Moscoso, knowing full well that the final destination of Posada would be Cuba decided to pardon Posada a few hours before she left office, setting up a diplomatic crisis that she happily bestowed over her successor from the opposing party.

But those were other days. Now Chavez and Castro have decided that the time of smiles to the Empire is over, and thus hysteria has reared its ugly head. Chavez "threatens" the US. Chavez sends all sorts of people demand the extradition of Posada to the US government. These people are gently reminded that in the US there is such a thing as separation of powers, the opposite of Venezuela where there is unity of powers in El Supremo. Gossip has that chavistas do not understand the concept, that indeed it is all up to Bush. And to add further embarrassment, the official documents for a bona fide extradition are not ready and radio stations play the game of "how many pages have been translated" of the dossier, mocking the foreign minister semi chastisement of last Sunday. Or should I say bullying, as Rodriguez Araque is doing his job explaining to Chavez that there are protocols to be followed while Chaves is only too happy not doing his job, rather spending Sundays talking off his ass.

But there is a reason for all this madness: Chavez must set an agenda so people speak of something else than the PDVSA debacle.

Ramirez goes to the National Assembly...

After weeks, months of dodging the issues, the oil minister and PDVSA president could not avoid it anymore: today he finally went to the National Assembly to declare. But of course the chavista majority had caved very easily on his demand to be interrogated only on some oil deals made pre Chavez. Another distraction, obviously.

Yet, for all of this, Ramirez himself further disgraced his cause and showed him to be a little man in spite of his great height. For one thing, the unacceptable conditions he set certainly showed that there are a lot of issues that he does not want to talk about, and that he hopes that one apparition will shut up the opposition for at least a few weeks until he must show up again. But he made all worse by coming with his court, that is, most of his managers and colleagues were at hand to make bulk. Don't this people have a business to run? A government to manage? Where they supposed to also answer questions?

But the best show was outside. A "spontaneous" gathering of "supporters of PDVSA" were chanting political consigns from the street. Gossip has that many were oil industry "staff" who will be paid anyway for the "day off". So we have reached yet a new stage in the bolibananization of the Republic, where now second fiddle officials copy El Supremo who always goes around with his court and jesters. 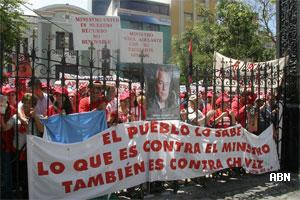 Supporting Ramirez. It reads "attacking the minister is attacking Chavez". Ah! Blind faith! And generic at that...

Oh, and by the way, did Ramirez achieve anything? Not at all (1). He was reminded that Chavez has been 6 years in office and that it was kind of late to "discover" the irregularities of the pre Chavez contracts (Helloooo! Where were you all these years?). People also noted that some of the decried tax breaks now so reviled were actually granted by the early Chavez administration. I am not too sure if I really can follow all of these details. But considering that silly Ramirez does not seem to follow them either, I feel much better.

One thing is certain: we are not any closer to know what really is going inside PDVSA. And closer to the point where only an independent and foreign audit could solve the problem. Obviously the current management does not know how to do arithmetic, nor wants anyone to do it for them. Gee, I wonder why.......

(1) He was even accused publicly of corruption duyring the session, as seen on TV.
Posted by Daniel at 6:02 AM