Castro In Venezuela, free oil shipping to the Caribbean

Well, the senile dictator of Cuba did make it to Venezuela after a long, long absence.

The reason is that Chavez is hosting a Caribbean summit on the resort area of Puerto La Cruz. In need of some glorified exposure after the set backs of Carabobo day and the failure to hold a three head summit in Venezuela with Lula and Kirchner, Chavez turned all his energy to make the Puerto La Cruz summit the biggest thing he could. And of course, having Venezuela oil bordering the 50 USD and a bevy of Caribbean islands strapped for cash willing to do anything for an oil bill discount, it was not too difficult to have them come and smile and take pictures with Chavez.

But in fact, close analysis of today's events show that this summit is not a real victory and might even end up as yet another diplomatic defeat for Venezuela. Let's see.

First of course, the joy of Chavez at receiving Castro home finally could not be hidden. I do not know about you, but I find this image highly offensive. 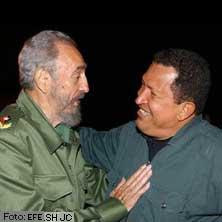 Besides seeing how prosperous the starved soldier has become in 6 years, his silly ingratiating smile, gawky happiness at the old tyrant that he is subsidizing to levels that have reached obscenity, makes me feel sick at heart. I must remind the readers that Chavez is constantly screaming against people like me as betrayers to the father land, and this one of the tamest insults hurled at on bolivarian Sunday School. But in fact the biggest betrayal to Venezuela is the one of Chavez, selling short our democracy, as it was, to serve the alien project of Castro, the anachronistic stalinist cum caudillo who is now the longest serving tyrant of Latin America, already reach in dictators for life.

But there is a funny part to it: the snafu about the announcement of Castro arrival. After the cancellation for the military parade (security reasons claimed), Chavez said Sunday that Castro was not coming. When rumor of Castro coming revealed too hard to contain (the security of preparations of Puerto La Cruz could not be hidden anymore) Izarra, the communication minister, became angry at the press this morning. Only to have to emit an apology this afternoon (after all, he had violated some of the clauses fo the "gag law" by promoting false information!)

But other symbols were quite telling of the evolution of the regimes minds.

First, in spite of Chavez glee, there was hard work at trying to pass the Castro visit as a last minute working visit. The ABN official page did not make a big fuss about it and Castro does not even appear in "today's pictures" section!!! Perhaps the guy in charge had already left for the day? But I doubt it as the arrival was duly reported as a piece of news.

Second, and more interesting, were the preparations. Chavez chose the wealthy and touristy enclave of Puerto La Cruz. He forced off boats from the marina, while invading it. The caravans of dignitaries and the security snarled traffic all day long. The treatment of the locals was, well, not too nice as probably not even Bush would create such disruptions... That is, when Chavez has a whim, all must suffer. Not seen since the times of Gomez! Of course I suppose that Castro and Chavez, always under threat of pseudo assassinations, must play that political show to the hilt, trash people's lives while basically blaming them from being trashed.

But this blogger doubts that this visit will improve Chavez image, even at home...

Buying good will with free shipping of oil

So, to justify the "summit" Chavez created PDVSA-Caribe. Will it be run from Havana too? Ramirez, the silly PDVSA head who cannot balance its check book, explained to us what was great with this initiative. Well, great at least for the small Caribbean islands who apparently will not have to pay anymore for shipping and thus save up to 4 USD per barrel. Is shipping cheaper through Havana or direct from Venezuela? Nobody seems to have asked that question.

Thus came them all, with their best smile to get the nice discount. But will this be good for Venezuela?

I must start by saying that I have always thought that Venezuela should have taken a leadership role in the Caribbean. It is, after all, our mare nostrum as we are the country with the largest extension of Caribbean coast. Even Colombia should not be a rival as it is divided by its attraction to the Pacific and the Atlantic. The Caribbean is not much more "culturally African" than us but much more than Colombia. The Caribbean is also our natural playground for tourism. And if you look at the map, well, Venezuela is closer from all the islands than any other country except the US to Cuba. It is a no brainer why Venezuela should be at the very least only second to the US in trade, business, investments, in the Caribbean.

I am not going to go into why previous Venezuelan governments never managed to play the Caribbean card well enough. Chavez has been more than willing to play it and has basically secured the OAS from outright hostility to him just because the Caribbean countries vote will at least abstain in time of crisis as they are too afraid of what Chavez would to them if they cross him: ask the Dominican Republic.

But Chavez will ultimately fail because his foreign policy is a blackmail one. He might not suffer himself its consequences, but Venezuela will as one day these islands will get revenge from the humiliations that Chavez impose on them, forcing them even to receive Castro as their leader with Chavez.

Remember, you read it here first.

And if you doubt me, I can already provide evidence. Leonel Fernandez, Dominican Republic president, has mended fences with Chavez. He actually got 4 pictures in ABN "today's pictures" section.

But that has not stopped him to pursue the CAFTA agreement with the US. No ALBA for him for the time being, though cheaper oil is always worth a few smiles and a short flight to Puerto La Cruz. So Ramirez can fill up his mouth with ALBA words, he is not any closer from having the Dominican Republic drop its US ties and jump in the castro- chavista nincompoop agreement. After all, amazingly, the Dominican Republic has a higher GNP per capita than Venezuela! And without oil at 50 bucks a barrel... So, does anyone think that Fernandez smiles are genuine? No, he is doing his job, which is making sure that his fellow country men get the best deal everywhere.

--- --- --- --- ---
24 hours later: A reader wrote in the comment section that the Castro-Chavez picture that I got from Union Radio is actually not from the arrival of Castro Tuesday, but probably from a previous trip of Chavez to Cuba. Thank you GWEH for showing us that there is added mystery to this visit as no good picture is found in any of the official media except for the one in the foreign ministry site that you linked to. Of course, the question if why did Union Radio dared show an old a picture when other media prudently avoided the trap. This is what is good about blogging. We find people that do catch up interesting info and pass it along to bloggers that do not hesitate to correct themselves. I would advice Union Radio to be more serious, 'cause if I fell for it, I do have sharp eyed readers ;-) But I do have another thought. Maybe Union Radio had that disgusting picture for a while, not daring to show it. But upset that Castro was so hidden from sight, published it to get back at Izarra's incompetence.

At any rate, the "real pic" is almost as good as it shows and even more decrepit Castro, someone that you have retired long ago to some Varadero beach house.
Posted by Daniel at 6:49 AM