I attended Wednesday evening the baptism of Teodoro Petkoff new book, "Dos Izquierdas". It is a slim volume, a few assays where he compares the two varieties of the left which is now the dominant force in Latin America, as it stands to get the last big prize, Mexico for Lopez Obrador. 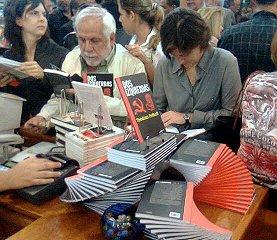 Brisk sales of Dos Izquierdas, with, on the cover, the archaic hammer and sickle and the modern rose in left fist.
Teodoro Petkoff is the editor of Tal Cual, a newspaper with the distinction of being almost as disliked by the right as it is nearly hated by the chavista left. Yet Mr. Petkoff leftist's credentials are impeccable: ex-guerilla, ex-political prisoner, ex-leftist presidential candidate. Until he came to his senses and realized that leftist ideals were not incompatible with pragmatism and general prosperity. However, the right never forgave him his guerilla years while the left, one of them anyway, cannot forgive him to have opposed Chavez even before his election in 1998, to have preferred then principles over madcap adventure.

But Petkoff ideas mutation started in 1968 when the Prague Spring was ruthlessly crushed. From then on the road was difficult but linear. As he said during his speech to greet the attendance, he realized that capitalism was unrivaled to generate richness, the wealth that must be created before any redistribution can take place. That he thinks the left is the best way to address Latin American glaring disparities does not stop him from being convinced to use capital to develop a country instead of the dead certainties that rule us today. Some of his words, from memory "Capitalism has demonstrated to be unique in its ability to generate plenty".

Teodoro Petkoff at the microphone
His speech almost sounded like the one of a candidate for office, and certainly he exposed some of the themes that could be used by any serious candidate wishing to square off with Chavez in 2006. It is actually quite simple, a no-brainer for any one from the democratic left. His thesis is that the Latin American left time has arrived but that it must chose between two versions. One is an anachronism, even reactionary in its ways, the left which holds power in Havana and which is slowly but surely tightening its senile grip on Venezuela while it tries to get its next prize in Bolivia. The other left is a democratic left, without inhibitions, which has reached great success in Chile and seems to be on the way to success in Brazil, apparently in Argentina and likely in Uruguay.

The message is only starting to reach Venezuela, after years of extremist posturing from chavismo and opposition. Petkoff visitors were a selected few, but very high in quality, from the intellectual elite of Venezuela to the remains of its democratic left, many who followed Chavez earlier until they realized that they had made a Faustian bargain in 1998. Many of these last ones were there, minority deputies in the National Assembly now, some who would have expelled Petkoff from the MAS in 1998 if he had not resigned first. But there was also Pompeyo Marquez who ran into trouble with the MAS in 1998 and who became the voice of conscience when Chavez repression started in February 27 2004, another guy with impeccable leftist credentials.

I did not see people from the traditional parties, that is AD or Copei, nor from Primero Justicia or other new franchises. But the democratic and social conscious right was represented, the economists who claim for social programs but a balanced budget, many of the important OpEd writers, those who do not espouse all of the opposition tenets, in particular its hope of a solution from within the army or form outside of Venezuela. That Petkoff is the editor of a paper where many would like to write on occasion was not enough to explain their attendance. Petkoff has become over the last few years a prominent leader of the opposition even though he probably did not intend it, and one that got no help on the way from any quarter. His pen in Tal Cual more and more sets the tone of the debate within the diverse opposition. Incidentally, Chavez has not attacked Tal Cual the way he has excoriated El Universal or El Nacional. Perhaps he knows that Petkoff sees right through him, as he sees right through his henchmen, in particular Jose Vicente Rangel. Not to mention that Petkoff can find the right words to expose them, such as his felicitous "izquierda borbonica" (1).

The atmosphere was relaxed and congenial. Everyone there, even if holding a seat at the National Assembly, is now far removed from the hallways of power with not much hope to get in for quite a while. Maybe why a blogger like yours truly could mix and mingle and take the pictures above. Unfortunately it was so packed in the rather small bookstore that I could not really capture in images the feel of the moment. Not to mention that it was my first foray with my new cel phone camera. Still, I did get the pics above, and my book signed, even telling Tedoro that I am one of his translators as the English language internet in Venezuela has long shared many of his views. All the major media came, but not the governmental one. All the people that could fit in the book store, perhaps up to two hundred, listened to every word in rapt contemplation. And the large crowd overflowing in the mall did not leave even though they could not hear the speech.

Thus Petkoff started becoming prophet in his own land.

(1)The Bourbons, the French royal dynasty overthrown in 1792 and returned in 1815, did not learn much from its long exile. Charles X, on his return and before he became king is told to have said that he had "learned nothing nor forgotten anything". The Venezuelan left now in office is the one that failed miserably in the 60 to take over violently and whose discourse was made useless by the successes of the first three democratic governments that ruled until 1973. Even when the political system started failing, it was unable to make any serious headway until finally Chavez took them out of the oblivion from which they could never escape on their own. And obviously they never realized during their own internal self created marginalization that the Berlin wall had fallen nor that the Castro regime had become a neo-fascist system.
Posted by Daniel at 4:12 PM