Preachers: Robertson and Jackson do Venezuela

I was trying to stay away of this subject, but no… After the nefarious words of Pat Robertson a few days ago, Chavez serves us Jesse Jackson as a honored guest of the National Assembly, taking the opportunity to give him the Simon Bolivar order.

But before I get going again on this topic, let me state something which will make things clearer. Jesse Jackson is to the Democratic Party of the US what Robertson is to the Republican Party. Each one in their own inimitable way (mercifully!) suffer from credibility problems, each one is definitely a pain in the neck to their political "allies".

To say that his words were totally out of place is becoming repetitious. However Chavez can be very thankful to Robertson. The blunder of this one has come at a perfect time for Chavez when some of his recent international forays had tarnished his image, when the US press tended to be less and less favorable to his persona. With a single totally stupid declaration, Robertson has done more for Chavez image in the US than years of paid propaganda through the Venezuelan embassy, the VIO and other paid agents mentioned through this blog history. Chavez debt to Pat is huge and he should leave a significant offering at the Virginia Beach collection plate. Actually, the announced intentions of suing Robertson and the expressed wish to deport him to Venezuela as a terrorist is even more fodder for both of their popularity. Meanwhile of course we do not discuss Venezuela true problems.

His visit is not much more beneficial to the Venezuelan people. He came under the excuse to give a speech to the Venezuelan National Assembly to commemorate the 42nd anniversary of the "I have a dream" speech of his mentor (who I always wondered what he thinks of Jesse up high in Heavens)

He did give a good speech at the National Assembly, urging Venezuela to "be strong":

Unfortunately one could not tell if this was pious wishing, an approval of Chavez actions, or a general human rights policy statements. It seems that actually his was more of a ringing endorsement of Chavez policies (while helping Jackson's own anti Bush agenda). For example reverend Jackson had plenty of time to even go to PDVSA (also looking to fill up his own collection plate?[1]) but he did not find time to meet with opposition representatives (where there are a few African American ones, I will hurry to point out!). In fact his timing to land on the country was when opposition marchers of a few hours ago where still at local hospitals trying to mend the wounds inflicted upon them by chavista storm troopers under the complacent eyes of the Caracas Police. Gee, I recall from my US years the screams of indignation of Jesse Jackson on such similar US events. But I suppose that even for African American US "leaders", double standards also apply when looking at the "natives" funny habits.

Freshly decorated preacher with the other phony preacher.
Pictures are indeed worth a million words. 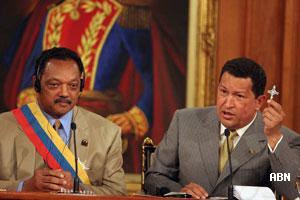 May the good Lord protect us from US preachers!!!!

[1] In fact PDVSA and Chavez have been announcing programs to help the US poor (probably making already a much better living than Venezuelan poors). The question of course is who will benefit REALLY of that help? The poor? The Rainbow Coalition directors and campaign organizations? Maybe the IRS might want to have a look at it as I want my Venezuelan oil money to reach the poor in the US, not funky preachers.

Ps: this post does not mean that we are not concerned about the US and Hurricane Katrina. We are very concerned in Venezuela and we have full TV coverage. Best wishes for those in the middle of the storm, we are with you.