I have reported already that Venezuelan president Chavez has been manipulating the Katrina tragedy, the destruction of New Orleans, to gain political advantage in his war of words with the US. Although many people have already winced a lot at this mark of bad taste (predictable bad taste if you ask this blogger who is getting tired to point out the low cultural level of the people in office in Venezuela), Chavez again used the best part of his Sunday show (a whopping 7 hours this last Sunday) to keep harping on the US ineptitude in front of the Katrina tragedy.

Well, maybe, and there is a lot to criticize in the US government response, but before attacking the US the decent thing would be at least to let them pick up the bodies floating in the streets of New Orleans. There is always time to attack, to blame, but the time of grief should always be respected. However, when Chavez egoism does not even respect the grief of Venezuelan people, what can we expect from him on the grief of other countries people?

This combined with Castro own criticisms (at least more restrained but Castro has learned a few things in his long tenure), forces me to revisit this issue again. And I decided to make it a thorough job.

A) I am helped by today's editorial of El Nacional which I have translated. All the accusations of the Vargas tragedy mismanagement are well documented through the pages of any Venezuelan newspaper that is half serious. I will point out to the reader that it is an editorial and that if El Nacional did not feel it could defend such words in court, it certainly would not put them in an editorial. Original Spanish version here. There is also a strong Tal Cual editorial who gets much harder on Bush case but still accuses Chavez of the same unecessary meddling, perhaps in even stronger words.

B) After the editorial I have designed a little comparative table as to Bush and Chavez in front of the rain tragedy that has befallen their country. Or rather how Venezuela and the US lead in disaster management, through Chavez and Bushn or their administration.

C) To finish, an excellent cartoon of Weil from Tal Cual whose meaning should be clear to anyone after reading the texts below. The cartoon is based on the pervasive logo on everything which carries chavista propaganda, logo that I also reproduce. Whenever you see it, then you know that the words accompanying it are official propaganda. Nifty, if you ask me, as you know right there not to waste your time with whatever is offered to you.

EDITORIAL OF EL NACIONAL OF MONDAY 09/05

The rope in the house of the hanged *

"The rich could get out by their own means, the poor stayed there, holding on… and it is now, four, five days later, that they are evacuating them"…

There was time "to evacuate, if not all, at least the poorest ones, those who could not get out by their own means"… "How many children died there, that could have been evacuated!"… "How come such a powerful government, knowing that it has dozens of thousands of refugees, people dying, does not activate a rescue plan?" These words from President Chavez, pronounced in his show yesterday, do not reflect to an appraisal of the errors committed during the Vargas tragedy, but they could well be.

If in one thing presidents Bush and Chavez look alike, it is in their capacity to gain from tragedies of war or of natural catastrophes in function of their immediate political objectives. To excuse themselves, they go and hook up in a contest on who did what wrong, who would have done it better, or how many died because someone did not do this at a given time.

Without taking into account the great responsibilities that their people have laid on them through the ballot, without being aware that their electors expect a more rational and even exercise of their high functions, this pair of leaders go about the world shoving as if they were kids at the school bell. With the forgiveness, of course, of the kids of the world.

Refusing to recognize his role as a leader, who must take advantage of opportunities to put in practice our traditional spirit of unconditional help to other countries when these suffer catastrophes, the President concentrated, in a reckless manner, on criticizing the US administration, with this paranoid obsession that has been ingrained in him by Castro as to the "American Imperialism". He was this close to say that Katrina was fabricated to distract public opinion on how bad the war in Iraq was going, as if this setback was easy to hide. **

That which attracts the attention of us non-fanaticized Venezuelans is that a tragedy of this caliber (where at least 10 000 deaths are estimated, above the 3500 of 11 S) is used to attack publicly, and through the state owned media, a government with which we have normal diplomatic relations. If the US is preparing an invasion or an assassination of the president, why not accuse it formally in front of international institutions? Or is it a vulgar and cruel propaganda operation where they want to involve everyone, as if we were mere fools? When president Romulo Betancourt accused dictator Trujillo, of the Dominican Republic, he presented evidence that could not be refuted in front of the appropriate international instances.

He also did the same thing at the OAS with Cuba, when members of the Cuban army invaded Venezuela and left abandoned part of their weaponry and the body, floating on the sea, of one of their men. No propaganda: proof and real facts. ***

In his show, the head of state said that the majority of the victims were poor people that were not evacuated on time, and were neither helped by rescue teams. It was "an announced tragedy", said our president, as if the Vargas tragedy (that we still cry upon) was not a super-announced one, as if here we had rescued on time all the refugees and recovered all the victims bodies, as if the levees and protection barriers had already been constructed and were not on their way, as if the bridges were not keeping falling whenever bad weather arrives to push people to sea.

And as if he had not disappeared almost 2 days during Vargas, just as Bush now with the New Orleans tragedy. But at least the US leader has the advantage to count on the support of two ex-presidents (Clinton and Bush senior) who came to the White House to account to the nation.

The Venezuelan president accused the US authorities that they did not know that "New Orleans was under sea level". He said that the hurricane was able to lift 30 feet waves and that this was already advertisement enough.

"I saw that in CNN" he admitted. Well, wrong deed because he should have seen it through Telesur ****

notes:
* Venezuelan saying whose translation escapes me. Basically, you should not speak in a home of the skeletons hiding in the closets.

** the "unconditional" that the editorial alludes to is to the gas that Venezuela is sending as help. Which is good, but which alos seems to give Chaevz the idea that he can criticize as he pleases, just becasue of HIS gift, because we can be sure that he sees at HIS gift....

*** Indeed Chavez has made it a major issue of people wanting to kill him without EVER presenting a significant piece of evidence, without ever managing to bring someone to justice. Except, of course, if you consider Pat Roberston inane declarations evidence.

**** Ironic comment of the editor as Telesur is vaunted to replace CNN any time soon in Latin America. If Chavez keeps watching CNN, it says a lot on how little genuine information Telesur is expected to produce…

Comparison table between two presidential, and administrative, leadership in time of crisis

A comparison of two disasters, but not with the objective to minimize any of them, just to show what each country and its leadership were facing when disaster struck. In other words the objective of this table is to show the reader that Chavez and his administration do not have a leg to stand on when criticizing Bush and his administration actions last week. His remarks are, simply put, ignoble propaganda where Chavez uses the misery of Katrina victims to serve Chavez and Castro's cause. The table represents what is known at the present time and in a few weeks certain elements will not be valid anymore. In both cases the writer does not spare the respective leadership, sort of to even up the playing field. Note: a painstaking chronological order of the events of December 1999 in Venezuela can be found here.

And now the perfect cartoon to summarize it all, the delyrium of the bolibanana revolution. 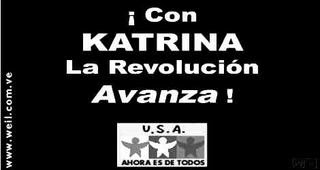 With KATRINA, the revolution goes forward!

And the ubiquitous propaganda warning logo :-)
"Venezuela, now it belongs to all"
Posted by Daniel at 4:49 AM