Yesterday press conference of Lorenzo Mendoza was widely covered. Below there is actually a picture of the event with the main media covering it. 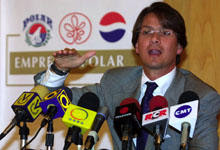 You can see who was there, from the logos of the microphones.

Venevision, Radio Caracas and Televen, the three private nation wide networks. Plus CMT, a Caracas local TV, RCR, a radio station and Globovision a 24 hours news TV station, our CNN of sorts. Links can all be found at Venezuela Today. There is also an unidentified mic that is probably the audio system of the room.

Observe that there is NO state owned network taking this very important press conference about a pitched battle between the state and the largest private company in the country (and largest private employer). Something highly newsworthy anywhere else.

Now let´s look at this picture of the labor minister announcing an extension of the firing freeze for an additional 6 months for low wages. Also a very newsworthy event, a few hours apart from the press conference above. 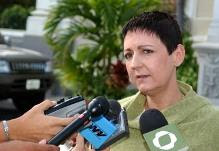 What is missing in this picture? Minister Iglesias is declaring from Miraflores Palace where the private press has limited access but where pro Chavez media find all sorts of "chance" encounters with public officials. One can identify the microphones of RNV, the state nation wide radio network, VTV, the state TV and three other unidentified mic and tape recorders. Missing was VIVE TV and TELESUR, the latest media network creation of the regime. Missing also any non Chavez controlled media that could, God forbid!, ask tough questions about a measure which is only a populist prop with little effect.

Now, please, would the people complaining about poor Chavez not getting a fair break with the opposition hysterically controlled media shut up? Chavez arsenal on TV nowincludes VTV, VIVE, Telesur, and the ANTV. Plus the only true national Radio coverage with RNV (no private radio network is allowed national coverage). In none of these networks supported, at tax payer expenses, and which broadcast propaganda all day long, has anyone opposing Chavez a fair hearing. If you do not agree, please go and talk to Walter Martinez, the very latest casualty of someone who dared to speak his mind in VTV.
Posted by Daniel at 4:14 PM