As I am typing Chavez has taken his Alo Presidente road show to La Marqueseña.

When a couple of weeks ago the hacienda La Marqueseña was taken manu militari from its owners some where not only amazed at the brashness of that attack on private property, but even thought that it might be the work of over zealous Chavez lackeys. How wrong were they all! Today, by berating the country from the seized farm, Chavez demonstrates that it is his real intention to slowly despoil the Venezuela people of its way of life. Today La Marqueseña. Soon enough, my home.

But the legal reasons behind all this mess were not in my mind this morning as I was fixing breakfast. After all, for all what I know the Azpurua family might have acquired these lands illegally and should be made to pay for them. Though there is no possible way that this fact, so far unproven by the administration, could justify the way the seizure has been done, nor the disrespect to the owners and the workers. Fascism is just that, fascism, even if it tries to cover itself as the defender of the people. Let's not forget that Hitler was National Socialist while "XX1 century socialism" is acquiring strange racist undertones. No, what I had in mind as I was heating up my frozen croissant bought a few weeks ago at Caracas's St. Honore was what music I should pop in my CD player.

I happen to believe that many answers to daily life questions have been written inside the music of great composers. Quite often I do get great insights as I listen to some piece who I truly believe my subconscious made me seek within my collection. I felt at 9 AM like opera, but not the whole thing. So I picked up one of my favorites collection of arias, the Mozart recital of Placido Domingo (1). A rather unexpected hit of Domingo better known for his heroic Verdian roles (his Otelo is the one for our lifetimes).

Later as I was chewing my delicious imported from Caracas croissant, reading El Universal (I like to read El Nacional at tea time) and smelling a pot of the best Venezuelan coffee (I get it from a producer at three times the controlled price, but it is worth every penny) the CD reached the Don Giovanni tracks. Namely the tenor part of Don Ottavio.

I happen to think that Don Giovanni is the greatest opera ever written. Which does not stop me from naming Otelo and Così fan tutte as my favorites. But no other opera compiles so completely the misery of the human condition, describes so well how weak and easily corruptible we all are. This with a number of astounding arias and duets unmatched anywhere else.

In Don Giovanni, Don Ottavio, Donna Anna's fiancé, swears to avenge her in the most florid terms. She was seduced (?) and her father killed shortly after by the title role. So she can certainly not be blamed from seeking revenge from the Don while maybe refusing to realize she is in love with him. So she blithely tries to use Ottavio to that end. Sensing the possibility of glory, Ottavio plays the game.

He "feels" her pain

È mia quell'ira, quel pianto è mio;
(her anger and her sorrow are mine,) 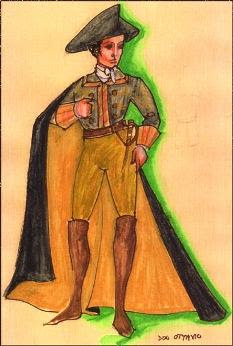 Dalla sua pace la mia depende;
Quel che a lei piace vita mi rende
(On her peace of mind depends mine too;
What pleases her gives life to me)

But he reveals himself pusillanimous and of course all the way through the opera fails to carry any action to that end, waiting for the statue of the Commander to drag Don Giovanni to Hell. At one point Donna Anna must remind him of his duty and sure enough he regales the audience with yet another aria promising revenge:

Ditele che i suoi torti
a vendicar io vado;
Che sol di stragi e morti
nunzio vogl'io tornar.
(Tell her that I have gone
to avenge her wrongs,
and will return only as the messenger
of punishment and death.)

Chavez is Don Ottavio. Today from La Marqueseña he is going to promise us yet again that all what he does is for us, to avenge all what was done to us by the evil seducers from previous regimes or Northern countries. After sending all his henchmen to do the deed he arrives when all danger is gone to figure in front. Just as Don Ottavio arrives at the end of the Opera once the Commendatore has taken Don Giovanni to Hell. Don Ottavio knows he is a coward and promptly tries to seek reassurance with Donna Anna

Or che tutti, o mio tesoro,
Vendicati siam dal cielo,
Porgi, porgi a me un ristoro,
Non mi far languire ancor.
(My beloved, now that heaven
Has avenged us all,
Give me some consolation:
Let me languish no longer.)

It is strange that Mozart gave such a lifeless character two of the most beautiful arias ever written. Irony? Just as it seems unfair that LatAm politics gave the language of redemption to such an ill prepared leader as Chavez, only able to promise a future that will only end in destruction and amorality. More irony?

But some of us are Donna Anna, and like her we are not fooled by Don Ottavio. We know that the only thing that will result from all this Marqueseña show is yet more land destroyed, or worse, land falling someday into the hands of a new cast of ranchers, but these ones approved by the Don as long as they sing his glory. By then Don Ottavio will have followed the course that will make him a new Don Giovanni, powerful enough to flaunt his amorality.

(1) I was quite surprised as I was looking for a reference to that CD that it can only be found used now as its issue date is 1991, the year I bought it. Now you need to shell off at least 79 USD through Amazon to get a used copy. Maybe my CD collection is worth much more than what I thought… Too bad chavistas full of money have not enough culture to appreciate Mozart and Domingo.
Posted by Daniel at 8:51 PM