An electoral campaign? Where? Indictments? Everywhere!

The casual observer of the Venezuelan situation would be hard pressed to detect an electoral campaign atmosphere. Except for a few pro Chavez posters here and there, and the occasional truck with blaring loudspeakers in the small towns of Venezuela, said observer would be clueless. In fact, public protests everywhere could at first be confused for campaign rallies by this observer. But they are not. Blocking of highways is now a more common practice for groups of people willing to express some form of opinion. When you drive around the country the odds that you will blocked for hours by such a protest must be now about 1 in 4 trips! But I suppose that in this age where all flows from Miraflores Palace if you want something it probably pays more to block the central highways of Venezuela than to attend the rather scant rallies that chavismo calls for its candidates. Not to mention the nearly inexistent opposition ones.

Should we be surprised? Not at all. The involution of our political process where Chavez is every day more and more at the center of all action, even the smallest of micro management scenes, has made people realize that unless you find a way to attract Chavez attention, well, you are wasting your time. Cynically the political movements of the chavista “coalition” 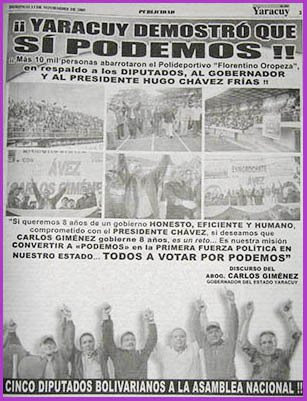 do acknowledge this. For the past week, in my citizen duty, even as I have not decided yet whether I will vote, I have been scanning the Yaracuy press to see at least the face of the candidates to the National Assembly. At work, someone gets the Yaracuy al Día, a pro Chavez paper (though lately it seems that the relations with governor Gimenez are souring). So I borrowed to see the pics of the chavista candidates. Sure enough I saw some advertisement, not much. Always the name of Chavez and Gimenez were displayed, usually with their pictures, and rarely, very rarely the name of the actual candidate. Only one actually did print his picture in the advertisement. And no opposition advertisement that I could find. Truly amazing! Ex governor Lapi used to pay for advertisement in Yaracuy al Día!

This week-end I got both Yaracuy papers. Yaracuy al Día did carry this time a full page of a political campaign rally called by governor Gimenez. As you can perceive from the composition, all duly orchestrated, all the advertisement revolves around Gimenez, our local Chavez. At least all the candidates appear in a group photo, WITHOUT their names though. And not very happy faces? Truly amazing!

The opposition paper, El Yaracuyano did carry one advertisement for an opposition candidate. The way it was presented you could see that she probably paid it from her own pocket. All the parties that support her appear in the add, which certainly would not be the case if a given party were to pay for it! Incidentally you can see how the “morochas” work in practical terms. The rectangles of the UNIDAD (MIN) represent the candidature for the local seat. The individual party rectangles represent the “at large” seat. And yes, she is running in both at once, which gives you a hint of the degree of confidence she has in her potential to be elected.

One smiling politician face, at least!

I find these two advertisement for the very local Yaracuy campaign very telling of the situation in the country. Chavismo more than ever relies on Chavez whose picture appears most of the time alone. In other words, candidates know that they will only get elected if they manage close identification with the beloved leader. Originality kills politically.

The opposition is quite dispirited, already accepting the defeat, unable to find resources to match the grossly obscene chavista spending and use of the state monies for its campaign. The opposition also must rely more on the faces of the locals. One can always hope for the opposition that a better identification to the local issues will help it out and that people will want to vote for a candidate whose face they can place, no? Do not count much on it.

The question that is begging to be asked is how come the campaign for the national assembly is so lackluster? After all, Chavez counts on getting a two third majority to be able to modify the constitution and remain legally in office for ever and ever. Is he so certain he will get it by just having his face on the ballot, alone?

From the recent political events you would not think that chavismo is so certain of a good score. In fact, if the victory is all but assured, be it from the despondency of the opposition or the open favoritism of the CNE toward the chavista candidates, what will be missing on election day are voters. Chavez will win by default and that is bad for him, for his self proclaimed popular leadership (even if people had to be brought to the La Plata stadium in between rounds of rioting). Very bad in fact for his image not to see long lines of people screaming to be let vote for. have said that the reunion in Panama included a 70 something year old guy with a silver cross on his chest and who went by the name of Lara. Castillo as a first name? Huh?

Let’s imagine that scene. Cardinal Castillo, the second in command in the Vatican for years, probably someone who was used by John Paul II for delicate, confidential or even secrete missions, went after retirement, as he is 80 year old, to the hot and damp Darien jungles, wearing his silver cross for all to see and giving his name around. At that meeting, in the same damp jungle where Patricia Poleo hairdo would not last 10 minutes, he would have met with a Jewish banker, the said Poleo, Venezuelan generals in uniform, CIA and FBI agents showing their badges around, etc… all to plot the murder of a prosecutor that apparently was more dangerous for them than Chavez and the Devil himself. I’ll bet you they also discussed creating a Bolivarian “endogena” cooperative to buy a bridge in New York. All of this as Colombian psychiatric impersonator with an impressive criminal track record was free to take notes.

That the possible motivations of these people to kill Anderson has not been addressed by Isaias Rodriguez so far, the simple fact of trying to imagine that scene can only lead any 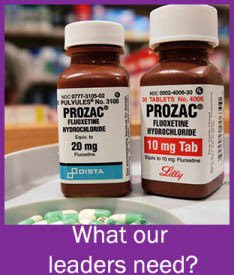 one with half a brain to consider that Isaias has been taken in for a ride by someone at the office. No wonder that very seriously on Friday’s Tal Cual front page Petkoff has asked for the resignation of Isaias, the strongest editorial so far on the case. Isaias response? “not even dead will I resign!” Which besides pointing out at the arrogance and stupidity of the one who knows he has been caught, reflects that his lithium is not doing it for him anymore.

But Isaias boss lithium is not working much either. Today, as I heard the report on TV, his Alo Presidente was a long rant on Fox and Bush and what not. At three weeks from a crucial election Chavez could not find in a 4 hours rant the time to discuss electoral policies and strategies.

You can fool some of the people, etc… you know that speech.

PS: I was writing this post listening to Broadway tunes. What your subconscient makes you reach for before you get to work! Surely there is a musical somewhere in what I wrote. But I suspect that as long as we do not have an Evita to focus the attention, the people just won't buy such a screenplay.
Posted by Daniel at 3:30 AM