The Chavez Effect on Poverty

AIO, a long time reader and even a poster on occasion has sent me this for publication. I think it is interesting, at least for me, in that it does make us think about how numbers are manipulated. Enjoy! and tough questiosn will be answered by him.

Daniel posted on poverty not long ago, a topic that I have been thinking about for quite some time, and he also recently posted on misleading economic information provided by the Venezuelan government. (See The Venezuelan Mirage, Parts 1 and 2.) This kind of fits into that theme, but I wrote most of this back in November, so we can’t really call this Part 3. How about “The Venezuelan Mirage – the Prequel?”

Though I am no longer in Venezuela, I am still paying attention to what is going on, and seeking information from a variety of sources. On a strongly pro-Chavez blog I found an article (1) using Venezuelan poverty statistics to attempt to show that Chavez has been reducing poverty, and that the 2002/2003 strike is really the only obstacle to greater poverty reduction since 1998.

The essential point of the essay/post is that “Upon taking control in 1999 the governement [sic] followed through on the prevalaent [sic] current that was leading to improvement in poverty reduction.” The author then invites “the reader, [to] be the judge,” which I did, and purely from an objective, mathematical perspective. I think the conclusion will surprise you. It surprised me.

First let me say that poverty is a very important issue to me, in part because I grew up poor myself. Not indigent, but I remember standing in the unemployment line with my mother as a child. I later went through a time as an adult eating only one meal most every day, because I literally couldn’t afford more food. I’ve been on more forms of government aid – in both my youth and adulthood – than the average American can probably name. I’m better off now, thanks mainly to government assistance to get me through college, but am by no means rich. (I’m not in the highest U.S. tax bracket, I don’t own a home or any property, and I’ve never earned capital gains.) More than most people, perhaps, I understand the role a government can play in keeping and moving people out of poverty, because it is inescapably the story of my life. That said, for me to support someone’s anti-poverty work, it’s got to be effective. I’m a pragmatist – words aren’t worth much, only results, so these statistics are far more relevant to me than anything Chavez says in his favor, or that someone else says against him.

To begin, here is the data the author refers to, which was obtained directly from the INE:

The author’s premise, or hypothesis perhaps, is that Chavez being President is effective against poverty; that is, Chavez has caused the poverty rate to drop, and the only reasons that poverty increased was the general strike. This is based on the fact that the poverty rate was down every year from 1998 to 2001, but then rose in 2002 and 2003, when the strike took place.

First, however, a comment on the data itself. In order to scientifically test a hypothesis – that a given factor has a certain influence on a specific outcome – it is necessary first to determine what the results are without that factor being present. This is called the control. In this case, we would have to be able to see what happened to the poverty rate before Chavez became President. We have the poverty rate in 1997, but it is the change that is relevant, which we can only find by comparing it to the rate in 1998 – after Chavez became President.

In other words, the INE, by not providing sufficient data, makes a true test of such a hypothesis impossible. We have no control; therefore we cannot truly test this hypothesis. Was this by design? We can only guess. Moreover, the INE website no longer has even that much information available, only this 2-page document, (plus a “poverty map,” which enumerates poor Venezuelans by state, but doesn’t even use income as part of its definition of “poor”) focusing very little on what the actual statistics have been but greatly emphasizing what they estimate they will be in the future.

Nonetheless, we can consider the idea that a downward trend (such as in the poverty rate) is proof of a downward influence (by Chavez). Consider a ball thrown up in the air. Its movement has an upward trend. Does that prove that gravity has no effect, or is actually pushing it upwards? Of course not! A ball moves upward because the momentum from forces that were affecting it before – the push by a hand – overcomes the effect of gravity, at least for a time, while gravitational force is constantly pulling the ball down. In the same way, while an economic indicator can move down due to forces pushing it down, it can also move downward (due to momentum) while forces are actually pulling it up.

The question is: which is happening here? In the case of the ball, you observe the effect of gravity by seeing it slow down as it rises. It is moving up, but decelerating. Eventually, it slows to a stop, and then begins to move downward. Examine the poverty data. From 1997 to 98, it drops 4.2%; from 98 to 99, 1.9%; from 99 to 2000; 1.6%; and from 2000 to 2001, 1.4%. It is indeed a downward trend, but clearly a decelerating one. Like gravity pulling downward, there appears to be something pulling poverty upward. There was a downward trend, and then something changed to slow down that trend. And what is the one variable that was introduced, according to this author? Chavez.

The principle can be expressed mathematically as well. The actual poverty data can be represented by the following equation:

Where P = the poverty rate and t = years since 1996. Plug in different years (such as t=1 for 1997) and see for yourself, if you like. The values for 1997, 1999 and 2001 are exactly right (they have to be, since it takes 3 points to derive a quadratic equation), while the predicted result for 1998 (44.6625%) is less than 0.8% too high and the predicted result for 2000 (40.1125%) is less than 0.3% too low. (N.B. I could have picked other points to derive the equation, but I picked these for three reasons: the difference between predicted data and actual data in the other years is the smallest, both in total and absolute values; it was one of just two equations which had one prediction too high and another too low; and it used the “normal” data - not affected by the strike, or when Chavez was theoretically the only new influence on the poverty rate – most spread-out over time. In other words, it is the equation that gives the most accurate picture possible of the actual data provided.) You can visually see that the predicted trend matches the actual data in the following graph: 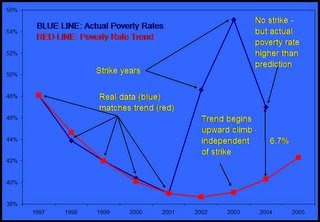 Now that we have seen that the pattern holds (and that the equation I derived accurately represents actual results), we can look at where the result diverges from the prediction. We’ll start with 2002 and 2003. The equation shows that poverty should have been 38.7% in 2002 and 39.1% in 2003. The actual results were 48.6% in 2002 and 55.1%, 10% and 16% higher than expected (as seen in the graph). No doubt about it: the strike hurt people, and some of the neediest people in Venezuela. I don’t personally know anyone who still says that the strike was a good idea, but I suspect there are some – perhaps many – who say that it would have been if Chavez had indeed resigned. If any of the readers of this blog are in that category, I would encourage you to reconsider that opinion in light of this result.

However, while the strike caused problems, we can see from the predicted results that the downward trend in poverty rates would have begun to reverse itself in 2003 without the strike. Just like gravity eventually pulls that ball downward, the upward force eventually would have overcome the downward momentum and turned the decline around. And remember, I am only interpreting the mathematical equation based on actual data, not offering a subjective opinion.

Moving to 2004, the equation predicts that poverty would have increased in 2004 to 40.3%. However, the actual result was 47.0% - quite a bit HIGHER than the equation predicts! I imagine the author and others would tell you that this is simply the lasting effect of the strike. There is probably – I would say certainly, except that it is unprovable – some truth to that.

However, such a simplistic assumption ignores some basic facts (all from government sources, the BCV and the MF), which I’ve put into this table:

Next, poverty rose from 1998 to 2004 despite huge increases in government spending (and oil revenue), and a vastly increased government role in the economy. Note also that the rate of decrease slowed considerably from 1998 to 2001 despite a very large spending increase. This shows that government action aimed at helping the poor was not very effective, and evidently less effective than with a lesser role in the economy, as seen by the 4.2% decrease from 1997 to 1998.

Finally, debt rose substantially over the same period, handicapping the country for dealing with poverty in the future.

While this result begs the obvious question of what Chavez has or hasn’t done to affect it, I would prefer not to speculate on that for the moment. That would be subjective, and I would like this to stand alone (for now) for what it is: an objective, mathematical conclusion based solely on the data provided by the Venezuelan government.

But the bottom line remains: since Chavez became President of Venezuela, the poverty rate in the country has been affected – unfortunately, in the wrong direction.


1) The original article, which can be found here , was written by someone known as El Pulpo, a former frequent visitor to this very blog. I know that many here did not like him very much, but I ask that you ignore that for the sake of this post. I did like him, and remember some very interesting conversations we had here. Please consider what he wrote as simply a starting point for discussion, on a very important topic.
Posted by Daniel at 2:43 AM