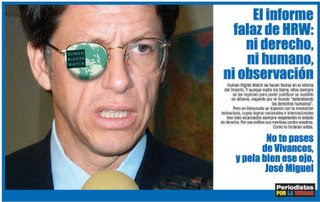 Creativity of course was not expected from people that are clearly running out of ideas, but not out of ill intentions. I got this in my mail box.

This was published in Ultimas Noticias, the only major tabloid paper which is equally read by chavistas and opposition since it has a rather popular bent, short written news, and the best red page without looking like the Enquirer.

This is all the argument they could present. A phantom "journalist" organization which signs kind of the logo " ahora es de todos". They even started by accusing Human Rights Watch to be named in "the language of the Empire" reflecting their supine ignorance as to what English has become, and their tremendous inferiority complex along the way.

Basically, trying to shoot the messenger, the strategy always used by those who run out of arguments.

Now that I think of it, it is the one that some chavista visitors to this blog tend to use. Interesting connection, no?

PS: the add is so bad, the puns so lousy, that it is not worth translating. But the obviously hurried response demonstrates indeed that HRW hit the sore spot.
Posted by Daniel at 4:23 AM