The Church, in Chile and in Venezuela

Chileans can celebrate today that they made history. For the first time a woman in South America, heck, in Latin America, made it to president on her own right. Other cases, though meritorious due to the circumstance (Chamorro or Moscoso) were the result in part to their connection with some known husband that could not run for office. Bachelet won it on her own.

What is remarkable there is not that she is elected as a socialist: she heads a coalition and although a socialist herself she depends on enough centrist support that Chile seems safe from adventure, in particular after the amazingly successful Lagos demonstration, a socialist who did not see a free trade treaty he did not like. What is remarkable is not that she is a woman: she was running in a primary in her group against another even more remarkable woman, Soledad Alvear, who desisted in her favor. No, what is remarkable is that in a country where the Catholic Church resisted so much that divorce is barely happening there, Bachelet is a divorcee and an agnostic (probably an elegant way to hide her atheism). It seems that the changes in Chile are deeper than one would have thought, perhaps the first country getting into a right/social-democrat European pattern for the good fortune of its people.

Chavez gets hit again in Caracas

If we can assume that there is some despair in sectors of the Catholic Church of Chile, we can be quite certain that they have much less problems than the Catholic Church of Venezuela: after all Chile has been steadily growing for the past two decades, national reconciliation is low but advancing, the Church lost the divorce battle but divorce is still harder than anywhere else in LatAm.

Things are different here and divorce is the least of the concerns. The Venezuelan Church emitted its regular report last week. Chavismo was not amused.

In short the Church points out to “the uncertainty of Venezuelan democratic future due to the extent of its political problems”. It added: large and deep corruption in some areas, “the munificent external solidarity and the deterioration of the institutions” (observe the juxtaposition, an elegant way to state that there is NO control over state spending), the fast increase in poverty and insecurity, politico-judicial repression, violation of human rights, penalization of normal activities (read: Tascon list), in the same sentence “negligence, omissions, manipulations and distortions” (code words for general incompetence).

And even when they do acknowledge social programs they blame the government from not trying to go to the root of the problem, not trying to erase that handout mentality who thinks that working is not a viable option. It calls for opening to all sectors of the country as all are needed, denouncing point blank “the open favoritism of the government for those who support him” (Tascon and much more there!). And most infuriating for Chavez “to stop political persecution and complete renovation of the Electoral Board, its members and rulings, organizing it as stated in the constitution and with the unavoidable demands of transparency, autonomy and trustworthiness” (you cannot say it better that the CNE is a den of cheats!).

Chavez main argument? “It is a lie” plus assorted associations with the opposition. However, duly stung as only truth hurts, he also added that he was willing to collaborate some with the Church, in particular on the latest Mision, Negra Hipolita, who after 7 years in office is the first real effort for street kids. Or so we would hope.

However Chavez being Chavez he chose his State of the Union Speech to start his latest anti Church rant, quite appropriate I would say after his anti Semitic comment of December. This rather gross affair was, as a friend of mine said, an Alo Presidente in frock. For almost 6 hours he nailed all of his supporters in the National Assembly, the diplomatic corps, a large group of Venezuelan public servants and soldiers who probably had better things to do such as repair highways than to listen the answerless rant of Chavez, a long string of platitudes, accusations, bad jokes and assorted vulgarities. If all is going so well, why such a long speech? In fact it looked more like a frustrated demagogue that is still reeling from his December 4 disdain, a frustrated man exacting revenge on those who do not voted for him by insulting them in an interminable “cadena”.

Sunday he still had enough energy to do yet another Alo Presidente, back to the red shirt. His anger was aggravated again as Rosalio Cardinal Castillo made quite a little speech at the Divina Pastora ceremony in Barquisimeto yesterday (1). In his speech the Cardinal simply picked up some of the main points of the Church report and made it a personal criticism and plea. Perhaps the holiest day of Barquisimeto was not the time and place to say it, but the Cardinal never speaks without knowing what he does.

So Chavez went ahead and first started criticizing again the Church Report, refusing obviously to see that it is a serious report for a naked emperor who is even losing the bridges. Then he demanded that the Church Assembly dissociates itself from the Cardinal, and even offers an apology.

But I doubt Chavez will get much

To begin with the Cardinal participated in the elaboration of the report and the opinion polls seem to indicate that he is more in touch with what Venezuelans think of the hell the country is becoming rather than the rosy picture Chavez sycophants feed him. Second, the Cardinal has retired from any activity in the Venezuelan Church administration since he decided to take a higher political profile. So far the bishop of Barquisimeto as complained about the timing but he has not denounced or apologized for the Cardinal. Chavez claims that Caracas Archbishop called him but there is no way to trust him on what he says on that. In fact even that lousy attempt at lying was cut short as Monsignor Santana, the head of the Church assembly declared that this one was under no obligation to apologize. The monsignor stressed that the Cardinal was completely out of the administration of the Church and thus was speaking “and repeating positions he had already taken elsewhere” as a private citizen. 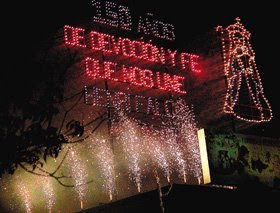 al, reminds us that this one has been unjustly accused of plotting the murder of Danilo Anderson. Suggesting indirectly that if someone has to apologize to the Cardinal, and to the Venezuelan people, it is Chavez. Not to mention that El Impulso reports that the local chavistas in office in Barquisimeto were trying to use the organization of La Pastora procession (2 million people) for their own political agenda, as can be seen from Mayor Henri Falcon associating his name in the light display on the right , at tax payer expense (2). Well, they did get some of their own medicine.

What to think? I doubt that the Cardinal is senile enough not to realize what he has done. And the Church is not complying with Chavez. They might not have liked the timing but the Church certainly cannot negate the message as it is what they wrote in their report: they certainly can sense that this is exactly what Chavez wants to do! And they are not falling in the trap.

Meanwhile, to come back to the start of this post, no one is worrying much about the future of democracy in Chile. Curious, no?

1) La Divina Pastora is perhaps the largest gathering of Marian devotion in Venezuela. This year it is thought that it reached up to 2 million faithful walking the streets of Barquisimeto. In addition this year was the 150 anniversary of the devotion and its importance got a special recognition of the Vatican. Hence the enhanced value of the Cardinal words?

2) If you look at the pic in El Impulso link, you will see that the name of Barquisimeto Mayor, Henri Falcon, appears in the light display to La Pastora. Clearly Falcon played politics and self promotion with La Pastora, so why not the Cardinal? Double standards over and over... Not to mention that notorious cinycs of chavismo, people that have not seen at church in years except for weddings and funerals were with their new found angelical face at the Pastora high mass.
Posted by Daniel at 2:57 PM