Less than meets the eye

More than ever Venezuela appears as a land of contradictions. If indeed there is a significant economical increase, the casual traveler to Venezuela will observe more indigence than ever, more street kids than can be counted, more destroyed highways, more garbage and dirt than s/he would recall from a previous trip. How come? If the clear suspect is the highly inefficient and probably equally corrupt public administration, there is also a lack of direction for economic and social policies whose sole aim is to re-elect in vita aeternam the beloved leader of the revolution. If that strategy seems to have lower yields than before as people are shying away in droves from the ballot boxes, the pernicious effect on the economy of a rudderless ship can already be detected. Let´s see how a multitude of social programs with little or no follow up are able to create the impression of prosperity without solving any problem and even less offering peace of mind for a solid future.

Denying that things are moving in Venezuela would be foolish. No matter how much corruption might distract huge sums of dollars, no matter how many “gifts” the new Red Santa Chavez has been giving around in 2005, 3 years of high oil prices are having an effect.

The first question is: can we measure that effect? The answer? Not accurately. Since 2003, when finally Chavez acquired full control of all institutions and could place all the sycophants he needed to “improve” things, Venezuela has become a country that cannot be audited. Numbers and statistics are routinely emitted, be it from PDVSA or from any within the executive branch; but cross questioning by journalists or experts is carefully avoided, and forget about a non partisan commission to check out on some of those numbers. Obviously any government in the world would love to “arrange” numbers, and they do it whenever possible, the closer to an election the better. But the levels reached in Venezuela are simply scandalous, when not downright ridiculous. Let’s look as an example at the official INE or the SISOV, the two state organizations in charge of providing official numbers. As such, and as reported in this blog before, the authorities in charge there have for mission to publish “the truth” on Venezuela. But even the quality of manipulation is not good, allowing the critical mind to doubt fast.

The diagram on the right side comes from the SISOV. In it we can see the “occupational rate” and the “jobless rate”. No definition given. Any innocent soul would think that, woah!, 86% of the Venezuelan population has a real job (1). This is far from the truth: real jobs are a privilege in Venezuela, if you define real jobs as a 9 to 5, 5/7, 11/12, tax paying position. Too many “jobs” in Venezuela these days are in the “informal” sector, that is, street peddlers, house-call artisans, low wage services, etc… none of them paying taxes, none of them covered by social security, none of them with any health plan (unless downtrodden hospitals and Barrio Adentro limited primary care can pass as a comprehensive health service)

If we go to the more complete page of the National Institute of Statistics, INE, we do see the contradictions appear. First, there is a wide variety of definitions that confuse more than clarify things. The impression that one gets is that you are either “busy” (ocupado) or “not busy” (inactivo). Ocupado means that either you have a real job or go out in the streets for at least 15 hours of “activity”. This allows including any street peddler or any participant in one of the numerous “educational” misiones to be excluded from the jobless rate, and thus improve the numbers magnificently. 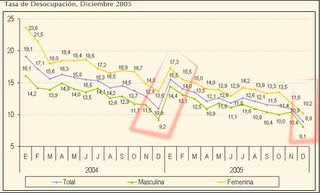 But even with such manipulations the government cannot hide quite well the basic job market problems of Venezuela. For example the ballyhooed decrease by 2% of unemployment from November to December 2005 is a mirage. It is simply due to the fact that street peddlers multiply at this time of the year and that on January 2, well, they will not even be able to have their 15 hours a week of activity. The picture on the left is the chart of the jobless rate obtained from the INE for 2004 and 2005, after two years of heavy lobbying to prove the “Venezuelan miracle”. In fact last year's decrease in November-December was 1.9% compared to the 2% of this year. But the increase in January added 4.6% to those that could not be “active” even 15 hours a week. Let’s see the variation in January 2006. Meanwhile, as promised, Chavez has “delivered” with a jobless rate below 10% for 2005.

Nowhere on the INE page I could find the same statistics for those who hold REAL jobs, that is those who are subjected to all the normal labor laws if Venezuela. You could naively go to the page of the Venezuelan Social Security system and check out how many people are making payments; but look as you may, you will not find that statistic (though many cases of a handful of retirees “finally” receiving their pension). Private reports on such numbers certainly do not paint the rosy picture of the INE. Estimates for the “informal” sector are anywhere between 30 to 50% of the working age population.

And all is like that, be it PDVSA claimed 3.3 million barrels a day and the assumed 2.8 by more serious and questioning observers. There is just no way to know for sure what is going on in Venezuela, and certainly few of the numbers that would not make the government look good.

Yet, we do see activity.

Traffic is at an all time high on roads, and car and truck sales have doubled or more. But one could quickly point out that the apparent traffic increase is also due larger and larger numbers of jalopies breaking down on the highways and slowing down everything, not to mention collapsing roads. We are not taking here or maintenance repair, we are discussing roads falling apart.

Trucks carrying goods are running in large numbers. Commerce is going well, malls are reporting increased sales, the SENIAT gloats not only of increased tax revenues, but even of going past their collection goals.

Are these signs of real economic growth? Not necessarily.

The complaint of Giordani a few days ago (see part 1) that private investment had to show up is an admission that only the state is investing in Venezuela. The only sectors where private investment is significant, and by foreign companies , is oil and telecommunications (though one would like to know where the money from the sale of Telcel went, it does not seem to have stayed in new Venezuelan investment). Venezuelan private investors are not doing their job. (2)

Yes, there is some investing by the private sector. After all business needs to invest some just to maintain production. Also, an undeniable increase in state spending does open some opportunities, in particular if you can make deals with chavista folks at Mercal. But make the rounds of Venezuelan industrial parks and you will see scores of business still closed (and the target of “popular” takeovers to make them “productive” again, 3). It seems that in fact the economic increase is made on recovery of unused potential rather than creation of new industries. Companies are re-hiring, not creating new jobs. The decrease from 2003 was severe enough that this “recovery” looks spectacular. But we will wait for December 2006 to see if new growth, real growth, is happening.

All in all what we are seeing is a redistribution of money. Not much more. Social programs create large expenditures, generate significant amount of new, but provisional, jobs that compensate up to a point the jobs not created in industry. Chavista social programs are mostly band aids, sustained as long as they bring votes and oil money remains high. There is no long term support planning of the social programs currently in place. In fact new misiones are announced, new help for foreign country offered. And no cost benefit evaluation of these programs.

With so much oil money coming in, imports have been rising briskly (not to mention the political imports to fill up Mercal shelves). Thus the reason why commerce and taxes have increased so much in 2005, while the business still open did get a chance to regain some of their old production numbers. Even the numbers of the Venezuelan Central Bank point this way when they recognize that the per capita income of 2005 is comparable to the one of 1998 (4). Seven years wasted (5).

Long term prospects are not good. With an increasing central planning system and judicial limbo it is not likely private investors will look much into Venezuela except for a few exceptions already named. Certainly no big private investment outside of oil (and even in oil considering the latest changes in rules at PDVSA and associates) will happen until the 2006 election is out of the way. Prosperity next year will be strictly based on how high oil prices remain and how PDVSA manages to maintain the numbers it has this year. A redistributive scheme will remain, while larger amounts are lost to corruption now that there is absolutely no control system left. With little investment in PDVSA as Chavez needs that money to win the election, we could even see a drop in oil income in 2007 and a recession. But by 2007 the regime thinks that it will be safe, out of reach from any challenge and tough decisions can wait. This disregard for sound planning will have a steep cost. We’ll see.

1) As a bonus we can also see that the first semester of 2003 (that nasty lock out conspiracy!) bump in unemployment has been compensated, thanks, of course, to the brilliant governmental policies.

2) There is also a big boom, allegedly, on state sponsored cooperatives. Since statistics are even less auditable I prefer not to discuss them. However I would like to point out that many of those cooperatives do not follow the work regulations that are mandatory in state and private companies. That is, investment, benefits, wages, etc… are very variable. It is simply too early to asses the economic impact of such “desarollos endogenos”.

3) Many closed business are targets to reckless “nationalizations” without any regard as to why such business went bankrupt in the first place. So far, they have been plainly confiscated and the owners not even compensated for the land they lost.

4) The Central Bank gives for the January-September period a GDP of 31.476.391 million VBE. At constant VBE value the GDP for the same 2005 period is 33.600.784. Factor in the population growth and the difference in oil prices and you will be able to realize that genuine production wise we are barely into the 1998 per capita perspective. In fact, even with the huge oil price increase we observe that for the same period the oil sector has a yield of 5.859.890 in 1998 and 5.493.383 this year! Which makes you wonder about the real production numbers of PDVSA…

5) Chavez has been ruling for 7 years now. If political trouble was big in 2002 and 2003, it remains that the first economic downfall was the devaluation of February 2002, the blame going directly to Chavez and Giordani’s policies. Even 2004 cannot be counted as a political crisis year as the recovery from 2003 was amply promoted by Chavez during the referendum campaign. In short, out of 7 years there were only two years of crisis, which were recovered in 2004 and 2005. The slow down of 1999, 2000 and 2001 remains to be explained.
Posted by Daniel at 2:48 AM