No, the title is not an oxymoron.

I came up with it watching the news from France where for the first time perhaps in its history people are rioting in the streets to make sure that nothing changes. Yes, that is right. In front of a stubborn youth unemployment, in particular at that crucial “first job” period, the government 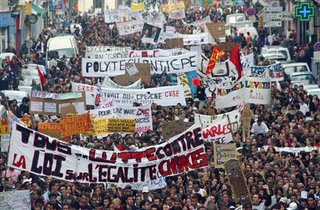 tries a rather timid and not well timed program. As a result, the people that are supposed to be the ones who would benefit from that initiative are the ones rioting in the streets while supporting students are been manipulated by the left and trade unions that have not been able to have a single good idea in 10 years. They have managed, with the help of the reactionary and nationalistic right, to screw up the European constitution and now they are trying to maintain a timid, shivering France as far away as possible from the world challenges.

Meanwhile, there is the UK, which has long gone through the painful changes, that keeps forging ahead. Across the border Germany slowly digests East Germany while it sees all of Eastern Europe opening to its economy with their crazed dash to modernity certainly stirring in Germany the changes it has to do to become again the main motor of Europe. Yes, all of these changes are giving Germany and the UK the edge over any other countries in Europe while a scared France remains frozen in place and will even be caught up by Spain who had no problems voting for Europe (if Spain holds together which is another story).

Yes, it is more complex than that but France is showing more and more that it is unable to tinker with a social system that has run its course, a social system that is leaving France with a class structure that bars immigrant’s children from integrating its society, a system where the youth from more established groups are seeking to validate entitlements instead of seeking adventure. That is why France voted against Europe, why last falls thousands of cars where burned in the streets and why now students are marching so as to make sure that nothing changes. Those are reactionary times and the only surprise is that the reaction is now coming from the left. At least in 1789 street rioting came from people that wanted bread.

But is this a unique phenomenon? No, it is also up to a point what is happening in Venezuela. It might not be as obvious in our case, but chavismo is very much a reactionary movement, a look to our past and a desire to go back to “halcyon” days that were never halcyon. In Chavez we 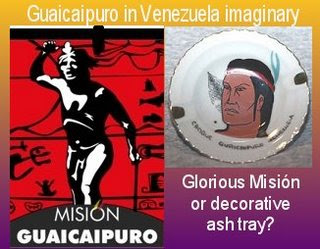 have a caudillo, just as those who gave peace to Venezuela by imposing their will. In those days if you did not do politics and followed all the dictates you were assured sustenance. Or so some want to think. With Chavez controlling oil personally many also think that it will be like good days of old where proximity to the leader ensured that you to receive the occasional gift. Democracy? What a crazy idea! Back to the Cacique rule!

Still not convinced? I realized this reaction to its full impact and implications when Maria Lourdes Urbaneja was Health Minister. Then she was in charge of establishing a new pension plan in agreement with the 1999 constitution (we are still waiting for it and 2 ministers have rotated in the chair since Urbaneja). She was interviewed then as to the great plan her office was coming up with. But the interviewer managed to have her say that her wonderful plan would not apply to the Central University professors, from where she came. They would keep their own plan, much better of course “they have acquired these benefits and cannot surrender them” were more or less her words. Change is good for the others, not for the ones that managed UNDER the old regime to get privileges and that intend to write them in stone under the new regime.

And this is what many in the chavista “elite” fight for, to enshrine their privileges, past of present, regardless of the ability of the country to afford it. That is why they are preparing themselves to go back to old and antiquated labor laws that were modified in the mid 90ies because the State was unable to fulfill its commitment to its own workers. It failed to do so but the people in charge now think they know better than the laws of economics. Thus why the chavista elite forges ahead in re-creating a welfare state that only existed in the imaginary before Chavez came to power, a welfare state that failed in spite of oil money because of inefficiency and corruption just as chavismo is outdoing any form of incompetence and corruption that we have ever seen in our rich past on that matter. And to make sure that the world will not force on us the necessary changes we are giving money away to other countries to create a Latin Block that will revolt against the Imperial US, perceived justly or wrongly as the harbinger of changes. Revolutionary Autarchy lead by our benevolent caudillo can only be better, while the same caudillo sends to the US all the oil it can to gain the dollars he needs to fight the US.

Yes, chavismo is quite a reactionary movement who looks to the past be it to add as tar in its flag or to dream of a rural world that never existed in Venezuela. It is a movement that denies individual freedom and initiative to put it all under the “collective” will enshrined into a single man. We are back to the XIX century and just a step away from colonial times where the ruler lived in Spain deciding what social class was allowed to wear a coat in Caracas.

These ideas of modern “reactionary revolutions” are not that novel. I have considered chavismo as a reactionary movement long ago and even wrote on it on my blog somewhere.

In an interview in El Nacional de Oteyza from the UCAB expressed such views as early as April 2003 (and held them earlier). I have sought that interview and posted it in my document blog. In there she states a few pearls such as:

The project of Chavez is conservative to the hilt, reactionary; the revolution is only a decoration.
This return to a rural life is very close to fundamentalism, because it is a confrontation between the oriental and western cultures and between modernization and tradition.
Deep inside [Chavez] it is a political reaction to political modernization, that is implied in decentralization, the election of governors, getting the citizen closer to power.

I did forget while I was writing this post to recognize the great article from Anibal Romero in El Nacional last Wednesday. In fact it is that article that prodded me to write on this to tie the two reactionary movements described above. His article is aptly titled “Tin foil Robespierre” as an unwanted homage to what a real revolutionary would do. Reposted here and worth very much reading.

Now that I reread my post I can supplement it with these two pieces that show that I am not the only one thinking along those lines, fortunately. Be them neo liberal thinkers as Romero or liberals like this blogger (US sense, just in case). The failure of a certain left to get on with world changes is pathetic to see for many of us.
Posted by Daniel at 7:29 PM