Today June 24 we commemorate again the battle of Carabobo that marked the end of Independence wars. Our Yorktown, Valmy or Waterloo, as you may have it.

Unfortunately this year it coincided with the beginning of the World Cup second run, namely the Germany Poland game. How would that play out? I was curious to know. As I had decided to watch the game on cable I went to 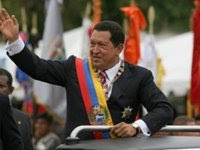 check out if the traditional military parade was on, of course on cadena (1) as it happens every year. To my not so big surprise the cadena had started and tanks were rolling on the Carabobo memorial field with Chavez all decked up with the sash and jewelry of the occasion.

But the cadena was interrupted shortly, right after some big wig general, ridiculously perched from the turret of some tank, in wooden language asked Chavez for permission to start the parade... Of course, someone must have known better and managed to convince Chavez to make a compromise, to shorten the cadena and move on to the game as soon as possible. This is election year after all and the people want their futbol. So, once Chavez had shown out live his power to the people by displaying how the chief of the army asked permission to Chavez, this one was gracious enough to give us back the game. But the two goals of Germany were already history as the cadena ended up around the 20th minute fo the game... The replay would have to do.

Now, that would be funny, and banana republic enough, but Chavez would not let us get away with it. Tonight a new cadena gave us the COMPLETE military parade. It lasted over three hours. I was watching something else on cable but on occasion I would flip back to the Venezuelan media so chained. The cheesiness of the parade had reached new lows as now the reserve, this recruitment of jobless civilians reorganized as an ad hoc militia to push back an invasion of the Empire, parades along the regular units. The military music somehow sounded worse than ever. Not only the choice, but the audio. It all looked more like a punishment for wanting to watch today’s game than any patriotic ceremony.

And I will pass on the sound track and the revolutionary banalities, clichés and plain crap uttered.

By luck I went again to monitor the parade just as the cadena was about to end: Chavez was preparing to leave. As expected a suitable contingent had been displayed in front of the tribune and in the purest castrist style they intoned some adulatory incantation to “comandante Chavez”. No sense of ridicule left anywhere… Being president of Venezuela is less important than being "el comandante". 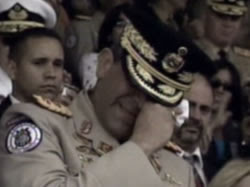 The news came right after the end of the cadena so I staid put. And I learned that during the parade Chavez announced “ by surprise” that general Baduel had been granted his third star, “on this very field of Carabobo” as if Baduel had done some heroic deed in battle. As far as I know his most glorious feat was to hold the tanks in Maracay on April 13. So we saw a teary eyed, visibly emotional Baduel receive this “honor” from Chavez, including the ministry of defense to be rotated in the next few weeks. 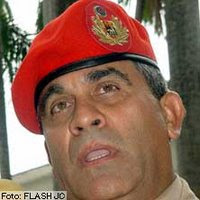 Actually I think that it might have been a real surprise though I would hope that it was all a montage. But in this bolibabana revolution all gravitates everyday more and more to Chavez who like any XIX century despot decides who gets what and when without any need for consultation (except of course his very close associates in the gang). What we are watching in fact is a delirious Chavez who is delighting in humiliating people like Baduel who have been sucking it up for so long that they do not realize how the system had degraded them. Pitiful to see of the army chief of staff is manipulated like a vulgar puppet… How low the mighty have fallen! How can anyone find a way to respect people after such shows?

--- --- --- --- --- --- ---
1) Cadena: the forced broadcast at the will of the government- when a cadena is called ALL TV and ALL radio stations in Venezuela must transmit SIMULTANEOUSLY the signal coming from the government, be it a Chavez speech or a military parade as it was the case today.
Posted by Daniel at 5:07 AM