By any rational means it is very hard to understand why is Venezuela trying to get into the Mercosur. But in fact, there is no rational explanation; the only reason why Venezuela is entering the Mercosur is because Chavez wants it. Venezuela foreign policy has ceased to exist as a state or nation policy. Now any decision that Venezuela takes on the foreign sphere is a political decision that favors Chavez' interests; it is Chavez foreign policy and only his. In this respect the Mercosur entry is just another banal example on how the interests of a man have overtaken the interests of a country.

I was wondering at how I could illustrate this best.

I could list a whole series of articles that have appearead in El Universal, and elsewhere. But the smart reader needs only to go to the search page of El Universal (in Spanish or in English), enter MERCOSUR as a key word, to be instructed by dozens of articles on the subject, from governmental declarations full of praise with no real evidence brought to sustain it, to all sorts of people decrying the entry as the ruin of large sectors of Venezuela economy. And of course the pictures of the ceremonies in Caracas and excerpts of one of Chavez kitchiest speeches which surely made more than one wonder... 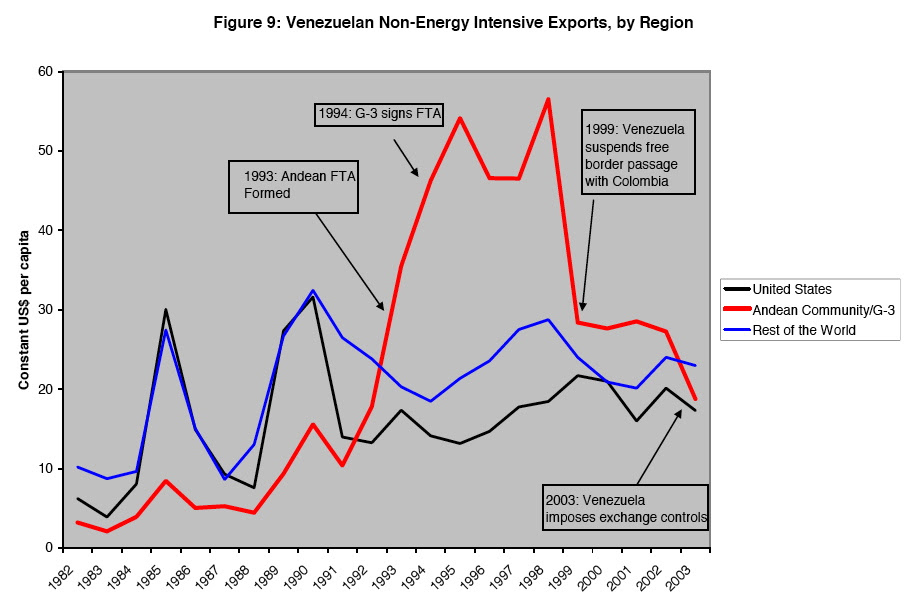 and foreign policy is at the whim of whatever mood Chavez wakes up one morning. Independently of the other meanings of the graph, that tracks commercial exchange of Venezuela through the years, one can see that the big drop in the red line (the Colombia/Andean Community trade) is due simply to a Chavez decision wildly decried at the time, a decision done without studying the problems that created the crisis at the time. This should have served us as a warning as Chavez has done everything in his power to distance Venezuela from Colombia and the Andean Community until taking the step to leave the community, even if the consequences for the Venezuelan consumer were negative. By the way, this week end agreement for a gasoduct between Maracaibo and the Guajira is another matter that Chavez is forced to subscribe if he wants to keep exporting oil from Zulia. But that is a matter for a future post. 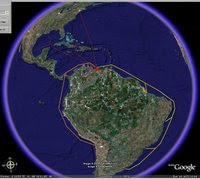 fact have no idea where Brazil really is. I understand that this tool is a simplistic one in a world where "services" are part of the trade value since many services come through Internet, irregardless of the location of the provider and its client. But goods will be exchanged so looking at a map is useful.

With the Google Earth Tool you can draw a “path” which roughly follows maritime routes and you can check out the raw distance between Caracas (La Guaira) and any major trading partner. The “natural” market of Venezuela by sea is the Caribbean and the United States. That is, New York is at 3400 Km, Miami 2500, New Orleans 3300 and Veracruz 3600 (red thin lines, click to enlarge picture). On the other hand the closest harbor of any relevance in the Mercosur is Belem at 2800, at the mouth of the Amazon. Needless to say that it is far from being a market as interesting as southern Florida. The first harbor of the Mercosur with some real interest is Salvador already 5500 Km. Rio follows at 6800 and finally La Plata estuary at 8600 (yellow lines). For the sake of the argument I have placed the further port of the Andean Community, Arica, with the light brown line on the left, at 5400 Km. And forget about land routes. The only country with whom Venezuela can establish significant land routes is Colombia (fuschia line) as the Bucaramanga/Cucuta area is 800 Km (more of course if you add the twists and turns but Google earth does not include that). Manaos will set you back 1800 Km and there is really not much to trade with there. Thus your next stop is Brasilia, still not the largest Brazilian market, and you will have to drive 4300 Km, plus the twist and turns (brown line). The reader can imagine easily that we are years (decades?) away of trucking with Brazil while Colombian one will not die no matter what Chavez tries (at least as long as Uribe is in charge in Colombia).

Of course that does not mean that one should not trade with distant countries, in the age of electronics and container ships the costs are relative. But this map shows clearly the folly of neglecting the nearby market where reduced shipping costs create an advantage before going to conquer distant markets for which Venezuela is woefully unprepared.

Or I could end with a brief summary of the way the "negotiations" took place:
There is always some interest in entering a “free trade” association. It is easier to place one’s products. It provides an economical association with other countries which places all of them on a better footing when negotiating with other groups. It allows for peace through trade. Do not get me wrong, the EU experience demonstrates that this is the way to go.

But the fact is that the economies of Mercosur and Venezuela are not complimentary, as we produce basically whatever the Mercosur already produces. But Mercosur produces it cheaper, much cheaper, even with increased freight value. We are going to get swamped.

So let me risk an hypothesis here. I think that Mercosur did negotiate sloppily this adhesion and that does not speak well of the Mercosur sytem. It is not because Chavez is selling out his country at bargain rates that the Mercosur should accept it. Thus I am left to think that Lula and Kirchner do not regard Mercosur very much and perhaps are using Venezuela politically AS MUCH as Chavez is using them politically. A trade union that starts on such shaky grounds, where the interests are centered on the leaders agendas and not on the real needs of the people is doomed to failure. I predict that the entry of Chavez in the Mercosur is going to weaken this one. I also predict that in the long run the real beneficiary of all of this will be Brazil which is, by the way, only second to the United States in "empire" building and attitudes associated with it. Check your history books if you doubt me.
Posted by Daniel at 5:11 AM