This week we saw the official start of the campaign with Chavez registering his proposal and Rosales achieving the political opposition union. That there are still other candidates running around and that the “abstention” party is still making weird moves are another matter. At least now we have two proposals to compare.

Chavez runs against “The Empire”

So Chavez started his campaign by going yesterday to the Venezuelan electoral board (CNE) to register his candidature (here with red shirted body guards running along the car while he speaks from the phone inside, armored window open for "public access" except that it is discreet back street). The days before there was a huge display of security to prepare the protection of the beloved leader from all those innumerable assassination attempts that have been perpetrated with hardly an arrest made. In fact, it was to secure the area to fill it up with the appropriate crowd of sycophantic followers chosen for their look as "people" looking as possible. The event included rose petals falling on the adoring crowd as Chavez walked out of the CNE. Even the Plaza Caracas, the haven of a 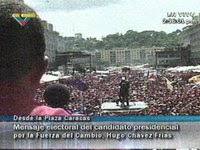 flourishing video private industry and all sorts of assorted irregular goods was emptied for the post registration rally. Provincial newspapers that should know better reported that “hundred of thousands” gathered at Plaza Caracas to cheer the conquering hero (El Yaracuyano reporting this morning on Yaracuy governor visit to Caracas to accompany Chavez on such great date, buses and all). Unfortunately the Plaza Caracas is not Mexico’s Zocalo, not even

the Bolivar Avenue. In spite of the best effort of the state TV favorable shots on the right, a few thousand only could be seen, never mind the buhonero tents still up. At most 25 thousand people can fit tightly and the pictures of the buses that took this “spontaneous” folks from all around the country showed the right number of buses to justify the attendance. If you do not trust the picture of El Nacional you can check the pictures shown by Miguel.

But these are of course all amiable incidents in the war of images that is just starting. What is much worse, incredibly more worrisome are the words of Chavez stating that opposition candidates are sponsored by the Empire, the good ole US of A for those who do not know. I will pass on recent details such as Chavez wish for the US to start in the road of democracy as he replied to the US wishing Cuba to start its road to democracy (no image consultant told him that it is never a good idea to call for democracy in LatAm when your generals surround you). No, what he said yesterday was much worse: any opposition candidate is a representative of the empire. The negation of democracy implied in such words is quite staggering. And it is an excuse for any treachery that Chavez might plan to do to ruin the opposition chances. If indeed they are betraying the nation, if they plan to surrender Venezuela to the Empire then it is fair to, for example, jail Rosales, reinstate daily cadenas as poll numbers decrease, use even more of the state resources for electoral buy out, and what not. It implies that there cannot be any other viable candidate but him since no candidate can oppose the Glorious Bolivarian Revolution.

Thus the question becomes: is Chavez announcing with those words that if he is reelected we are on our way to a one party state system? I suggest that people truly think about the implication of these words of Chavez. How could we possibly imagine a democratic alternative to chavismo if any opposition candidate has to be a clone of Chavez, or at least defend 95% of what Chavez defends? How could someone else run against Chavez if punishment is already promised as a traitor of the fatherland?

To contrast the hyper bombastic, and vulgar, and empty style of Chavez I will recommend folks to read the interview that Rosales gave to Roberto Giusti, one of the most serious journalists in Venezuela. In fact the interview is so good that I suspect el Universal will soon post it in English. I will keep an eye on it.

The words of Rosales are substantive, even if pronounced for electoral purpose. No empty rhetoric here, concrete and surprisingly refreshing short answers. Try to imagine Chavez giving such a concise and precise interview… You could not of course. People that have things to hide use lots of words when they talk, and Chavez is certainly no exception.

Just this sentence from Rosales that I liked a lot:

Chavez despises the Venezuelan intelligence and what he spreads around are crumbs, just as in the past.

A nice way to kill a few birds at once: discarding possible accusations against himself such as past politician, cheap populist, lack of imagination while focusing on Chavez totally inefficient administration.
Posted by Daniel at 7:24 PM