The first results are in. But firts let me mention some press release. The Associated press guy claims that there were "more" than 10 000 people. On the other hand the BBC did get a clue. They not only talk about tenS of thousands (notice the plural on tenS) . In addition, I quote: "If Mr Rosales can keep up this kind of pressure against his rival, the election results may not necessarily be a foregone conclusion”. We will just assume, to be charitable, that the AP guy was hangover from partying with his chavista friends from Aporrea. The readers will be able to figure out on their own with the few pictures I show if the BBC is onto something or not.

The pictures from below are from friends and relatives who mailed them to me tonight. So far only 5 have reported, but 5 groups that did not walk together. That is, they went at different time and places during the march. Only two of them did manage to reach close enough to the grand stand. Two late comers could barely make it to the Libertador. I have thus made my own little montage, pretending that I was at the march too (no acknowledgments of course, you will know who you are). I am expecting at least 2 more to report with pics but if anyone else cares to share I will add their pictures. For faster download I have posted them on thumbnail format, click to enlarge. Note: Alek and Miguel have posted extensively on the march and rally, Alek confirming the manipulations of the state TV, VTV, which I was inferring this morning. Funny 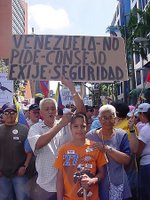 to see my suspicions so well illustrated!

First I will start with two slogans. The 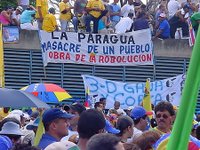 first one is about the scandalous military abuse at La Paragua. Votes are being lost everyday on that one. The other one is a pun on the wish of Chavez to reach a security council seat. Hard to translate exactly but you will get the gist of it: Venezuela does not want counsel, it demands security. At that crime rate! More votes are being lost there while Chavez travels safely with his hundred or 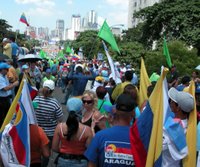 
This one is the grand stand at about a mile. What you see is a mile of people which are almost at a stop since all is pretty full by now. As a game you get to try to see where the podium for the speech was.

The next one is a montage I did. This one shows about the same angle but one hour apart. Above the Libertador is still filling up, below it is now packed. You can even notice the bus parked. Clearly the bus were early and carried the organizers (it did take a few people to organize and build the stands). Probably chavismo will like to take issue with it but I will advise them to desist: 1) the opposition is not afraid to show its buses: they are parked next to them and not clumsily hidden somewhere else as chavismo does and 2) there are not enough buses parked to account for all the people standing there anyway. 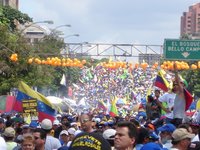 Next I have a view from inside the crowd, going down the "elevado" of the Libertador. It is difficult to conceive it any more packed with people than it was there. You can see the human tide going down the slope. Some pseudo-wit somewhere stated that the opposition could not even fill up the elevado. Well, there it is.


Of course the traditional police and security helicopters could not miss. For those late to this game, 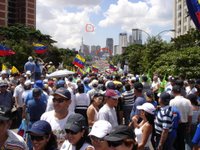 Chavez has long ago forbidden any helicopter or private craft to survey Caracas when the opposition marches or rallies. "Security reasons". That would be good if, say, one independent journalist were allowed to ride and film the rally, any rally. But curiously that does not happen except that on occasion, when the chavista manage a regular turn out, well, some pictures are leaked. Imagine that! I am sure that if chavismo rallies were routinely bigger than the opposition ones there would be no problem for the cops to be allowed to carry journalists on board...So, in red, the usual helicopter reporting to Chavez (who must be furious tonight) and since I was painting, I also indicated the distant podium (refer to earlier game).

To finish I figure out that I could do yet another montage. This was sent from the grand stand and it consists of two pictures from the same angle, one a zoom from the distance. I have linked, as a reference, the inflated PJ balloon. So you can see how deep and far the crowd really went. "more than 10 000", yeah, right, indeed....